Column: Tim Tebow's reality show heads back to the NFL 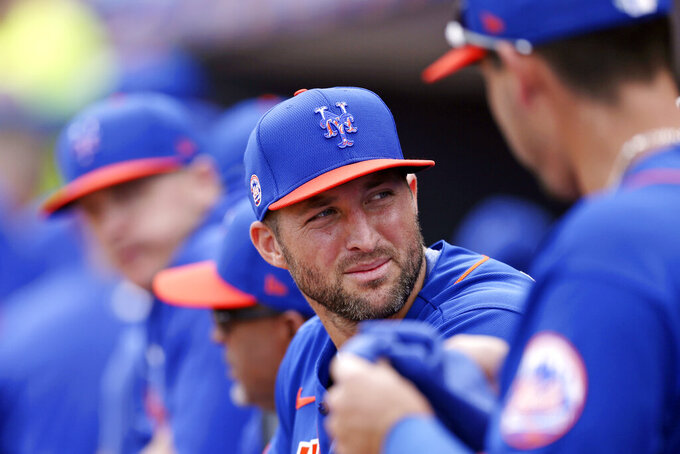 FILE - In this Feb 22, 2020, file photo, New York Mets' Tim Tebow looks back in the dugout during a spring training baseball game against the Miami Marlins in Port St. Lucie, Fla. Tebow and coach Urban Meyer are together again, this time in the NFL and with Tebow playing a new position. The former Florida star and 2007 Heisman Trophy-winning quarterback signed a one-year contract with the Jacksonville Jaguars on Thursday, May 20, 2021, and will attempt to revive his pro career as a tight end. (AP Photo/Vera Nieuwenhuis, File)

From the looks of things, that appears to be a pathway back to the NFL for ex-quarterbacks who haven't played the game in a very long time.

In case you missed the week's most ludicrous sports story, Tim Tebow is getting another shot at making it as a professional football player.

Nine years after he last took a snap in a regular-season game.

And, for good measure, while trying to learn an entirely new position.

Former NFL receiver Keyshawn Johnson had the most appropriate reaction when word came down that Tebow had officially signed a deal to attempt to play tight end for the Jacksonville Jaguars.

Johnson walked off the set of his ESPN radio gig.

Theatrics aside, the signing of Tebow was sure to be a polarizing move in a league that more than four years ago turned its back on Kaepernick — a quarterback who actually led a team to the Super Bowl — because he peacefully took a knee to protest police brutality and social injustice.

While hardly an apples-to-apples comparison — after all, there is no indication that Kaepernick was willing to change positions for another shot at the NFL — the league deserves all the ridicule it gets for this shameless hustle.

“I know it will be a challenge, but it is a challenge I embrace,” Tebow said in a carefully scripted statement that attempted to make this sound like a legitimate pursuit. “I appreciate everyone’s support as I embark on this new journey.”

He'll be reunited with his former college coach, Urban Meyer, whose first few months with the Jaguars have already raised doubts about how well he'll fare in the NFL.

Let's not forget, Meyer already attempted to hire disgraced strength coach Chris Doyle mere months after he forced out at the University of Iowa amid allegations of bullying and racist behavior toward players.

After an outpouring of criticism, Meyer cut ties with Doyle without bothering to acknowledge why his hiring was such a mistake in the first place.

Now, Meyer has got to persuade what will surely be a very skeptical locker room why Tebow is taking up a space that could be used for a more worthy contender for a roster spot.

While it's hardly unprecedented for college quarterbacks to successfully switch to a new position in the NFL, there is nothing comparable to this latest season of the not-yet-canceled reality series, "Keeping Up With The Tebow."

After his quarterback career shriveled up following two seasons with the Denver Broncos and a single year with the New York Jets, which was more than enough time to recognize that Tebow couldn't actually throw the ball, he moved on to a quixotic five-year quest to become a baseball player with the New York Mets.

While we'll certainly give him points for being willing to endure a lot of long bus rides in the minors, Tebow never gave any indication he could actually make it to the big leagues.

Sure, he kept getting promoted within the Mets organization — clearly, for no other accomplishment than his name — but his forgettable effort ended with him batting .163 at Triple-A Syracuse in 2019.

That was the end of the baseball line.

Now, for no good reason, it's back to football.

“He got more lives than a cat,” Denver Broncos safety Kareem Jackson joked on Twitter.

Meyer has tried to depict the signing of Tebow as a logical football move, one of a half-dozen former players the coach has brought to the Jaguars in an attempt to hit the ground running with his new team.

But all this makes Meyer sound like another former Florida coach who attempted to make the switch to the NFL.

Steve Spurrier also favored those who had played for him at the college ranks, only to learn the hard way that guys like Danny Wuerffel and Chris Doering couldn't cut it in the pros.

Spurrier lasted only two seasons at Washington before slinking back to the college game.

Time will tell if Meyer has a longer shelf life.

In the meantime, Tebow already took the field with his new team, taking part Thursday in a voluntary, closed workout. He is not expected to have any media availability until training camp, at the earliest, which is probably for the best considering the hoopla that has followed the former Heisman Trophy winner every step of his career.

Meyer has raved about Tebow's physical conditioning, and there are certainly no questions about the 235-pounder's work ethic.

He'll get every chance to succeed — even receiving an invitation to take part in “Tight End University,” an offseason training session that will include some of the top players at that position including Travis Kelce, George Kittle and Eric Ebron.

Ebron sent word through Twitter that Tebow would be welcome to join the workouts in Nashville. Kelce responded to the invite with several eye-raised emojis.

Maybe Kaepernick should ask if he can attend.

That might be his only hope of getting back to the NFL.