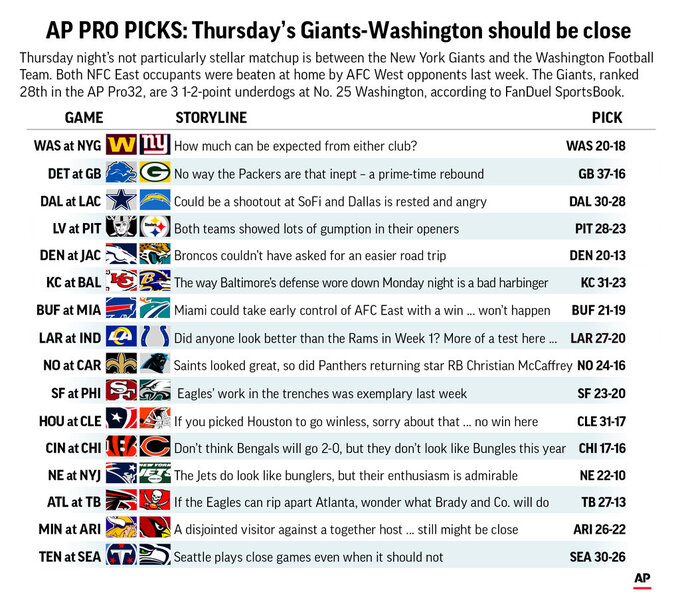 Time to rally beginning with Thursday night's not particularly stellar matchup between the New York Giants and the Washington Football Team.

Both of these NFC East occupants were beaten at home by AFC West opponents, the Giants falling without much of a fight to Denver, and Washington offering a bit more in losing to the Chargers. Of course, in their division, where something around .500 might mean a title, how much can be expected from either club?

There are some intriguing angles, though. Washington lost veteran Ryan Fitzpatrick last Sunday to a hip injury, so Taylor Heinicke goes at quarterback. He brings high energy, which he first displayed last January.

For New York, a major question is how top running back Saquon Barkley will perform in a short week. Barkley missed most of 2020 with a torn-up knee and found little room to run in gaining 26 yards on 10 carries vs. Denver.

“We’ve got to get the run game going against a very talented defense — probably one of the best defenses in the league,” Barkley said. “That’s going to be important to get your run game going. Watch film, learn from what I did, get the rust off and try to do a better job this week.”

The Giants, ranked 28th in the AP Pro32, are 3 1-2-point underdogs at No. 25 Washington, according to FanDuel SportsBook. Should be close ...

KNOCKOUT POOL: The Rams were an easy choice last week and we think CLEVELAND is just as likely to win in a romp this week against Houston.

No way the Packers are that inept. A prime-time rebound.

Could be a shootout at SoFi. Dallas is rested and angry.

Both teams showed lots of gumption in their openers.

The Broncos couldn't have asked for an easier road trip. Don't slip up here.

The way Baltimore's staunch defense wore down on Monday night is a bad harbinger.

Miami could take early control of the AFC East with another win. Won't happen.

Did anyone look better than the Rams in Week 1? More of a test here.

And so did the Eagles, whose work in the trenches was exemplary.

For those who picked Houston to go winless, sorry about that. No win here.

Don't think Bengals will go 2-0, but they don't look like Bungles this season.

The Jets do look like bunglers, but their enthusiasm is admirable.

If the Eagles can rip apart Atlanta, wonder what Brady and Co. will do.

A disjointed visitor against a together host. Still might be close.

Seattle plays close games even when it should not.