Coming off rout, Patriots look to keep rolling vs. Chargers 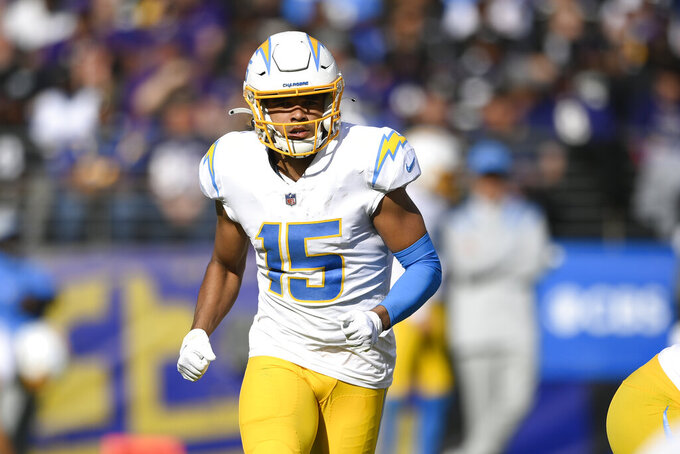 Los Angeles Chargers wide receiver Jalen Guyton runs in motion against the Baltimore Ravens during the second half of an NFL football game, Sunday, Oct. 17, 2021, in Baltimore. (AP Photo/Nick Wass)

OPENING LINE: Chargers by 5 1/2, according to FanDuel SportsBook.

PATRIOTS PLAYER TO WATCH: QB Mac Jones. The rookie is coming off his most complete performance, his first 300-yard game to go along with two touchdown passes and no interceptions in the Patriots’ 54-13 rout of the Jets. He leads all rookies in completions (174), passing yards (1,779), touchdown passes (9) and passer rating (92.8). He’s the only rookie QB to ever complete over 70% of his passes in five of his seven games. The rookie record is nine such games by Dak Prescott.

CHARGERS PLAYER TO WATCH: QB Justin Herbert. The low point of Herbert’s impressive rookie season came against New England, throwing for 209 yards and getting picked off twice last December. It marks the only time in 21 career starts that Herbert didn’t throw a touchdown pass or failed to complete at least 50% of his attempts (26 of 53 passing), while his quarterback rating of 43.7 that day is by far the worst the burgeoning star has posted.

KEY MATCHUP: Patriots RB Damien Harris vs. Chargers S Derwin James. Harris faces the worst run defense in the NFL as he looks to become the first New England rusher with three straight 100-yard games since Corey Dillon in 2004. Los Angeles allowed 187 yards on the ground and 4.9 yards per carry against Baltimore, a disappointing step backward after signs of progress. The versatile James is tasked with filling multiple roles for coach Brandon Staley, so expect him to be active near the line of scrimmage early to set a tone.

SERIES NOTES: The Patriots have won six straight games against the Chargers and nine of the past 10 meetings. … New England’s 45-point margin of victory last season was the largest ever in the series, besting a 41-0 win by the Patriots on Dec. 17, 1961 and a 51-10 win by the Chargers on Jan. 5, 1964 in the AFL championship game. … The Chargers have lost three straight home games against the Patriots, with their last win coming on Oct. 12, 2008 in San Diego.

STATS AND STUFF: Bill Belichick is 10-3 against the Chargers with New England, including a 3-0 record in the postseason. … TE Hunter Henry, who played his first five seasons for the Chargers, has caught a touchdown pass in four straight games. … OLB Matt Judon is tied for fourth in the league with 6 1/2 sacks. … C David Andrews is the only offensive lineman to start all seven games for New England. … WR Keenan Allen continues to be the Chargers’ to-go option on third downs with 11 receptions for 162 yards this season. Since 2017, Allen leads the NFL in third-down receptions (130), yards receiving (1,745) and first downs gained on third down (107). … Dustin Hopkins, signed this week, will be the Chargers’ 11th placekicker to play in a regular season or playoff game since 2017. … OLB Joey Bosa got his 17th career game with multiple tackles for loss by making two against Baltimore. … The Chargers have allowed touchdowns on 68.2% of red-zone chances (15 of 22), including giving up four in five opportunities to the Ravens.

FANTASY TIP: With Henry cashing in on touchdowns, Jonnu Smith has mostly been a fantasy non-factor in recent weeks. However, both Patriots TEs could be valuable options given the Chargers’ issues defending the position. Opposition tight ends have led their team in receptions and yards receiving in three of Los Angeles’ past four games, so both Henry and Smith should be productive even as they split targets.