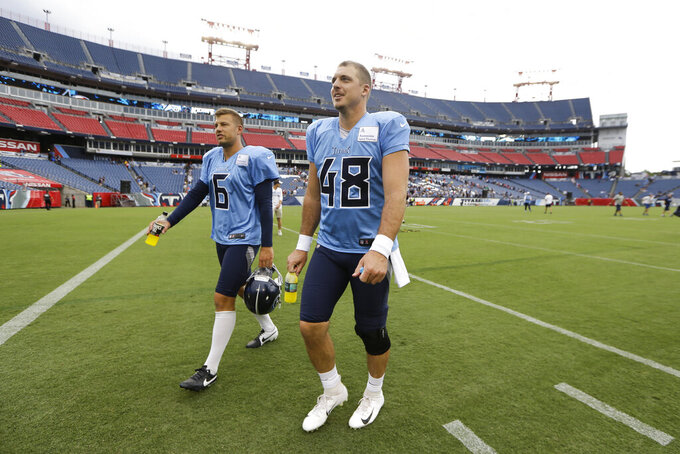 Tennessee Titans punter Brett Kern (6) and long snapper Beau Brinkley (48) leave the field in Nissan Stadium during a lightning warning during NFL football training camp Saturday, Aug. 3, 2019, in Nashville, Tenn. The Titans have had trouble filling their stadium for years and have needed the help of visiting fans to sell as many seats as they have. (AP Photo/Mark Humphrey)

NASHVILLE, Tenn. (AP) — Thunderstorms gave the Tennessee Titans a painful flashback to their 2018 season opener in Miami and the longest game since the NFL-AFL merger in 1970 before a night practice at their stadium.

Turns out offering a free concert by country singer Jake Owen followed by fireworks keeps people sticking around through a weather delay.

"The one thing I told the team we can't avoid the distractions," Titans coach Mike Vrabel said Saturday night. "All we can do is be prepared to handle them. I though the team did a great job. I thought the organization and obviously the fans for sticking it out. It was important for us to come in here tonight and get some work done, and I think we did that."

The Titans have had trouble filling their stadium for years and have needed the help of visiting fans to sell as many seats as they have.

The sales office stays busy pitching ticket deals to a stadium built in the late 1990s. Not even the first three-year stretch of winning seasons since relocating to Tennessee — each at 9-7 with only one playoff victory during that span — has helped the franchise lure back enough of their own fans to fill every seat regularly.

Ads scrolled throughout the practice for tickets during what the Titans billed as a "kickoff party" at Nissan Stadium. They threw open the doors and sweetened the deal with the free concert by Owen and the fireworks.

The original hope was that perhaps 30,000 would show up for a prime-time tuneup for Thursday night's season opener in Philadelphia. Interstate construction just outside the stadium didn't help, then came lightning and thunderstorms that sent the Titans back to their locker room and fans onto the concourses delaying the start by approximately 70 minutes.

But at least 10,000 fans turned out on a night Vrabel said came really close to what the Titans wanted. Vrabel says other artists have reached out to the Titans to be considered as options for such a concert in the future.

"We'd love to be able to try to continue to do this and make it something real cool," Vrabel said.

The Titans drew more people in 2018 to the stadium with a capacity of 69,143. More than 69,000 came out for an overtime win over Philadelphia on Sept. 30 with eventual Super Bowl champion New England drawing a season-high 69,363 in a 34-10 win by the Titans. A trio of games in December couldn't crack 61,000, though Indianapolis brought plenty of fans for the regular season finale as the Colts took a wild-card spot that went to the winner.

Light rain kept falling as the Titans finally took the field Saturday night. Wide receiver Corey Davis and running back Derrick Henry, who has not practiced since the opening day of camp, only watched.

Vrabel let the four Titans honored for their offseason study and work as the team captains: quarterback Marcus Mariota, defensive lineman Matt Dickerson and running back David Fluellen. Defensive lineman DaQuan Jones replaced wide receiver Cam Batson at the fourth spot after the receiver was placed on injured reserve Wednesday, and Jones will be captains with Mariota for one team.

Mariota opened completing 6 of 7 passes capped with a touchdown toss to Tajae Sharpe on the first drive by the white team. Ryan Tannehill narrowly avoided being picked off in the end zone to cap his drive, and another drive by the other squad ended up with a safety when a punt from the back of the end zone failed.

The Titans also worked on third downs and red zone where the defense dominated. Mariota was 1-of-4 on third-and-5, and his pass to tight end Anthony Firkser was broken up by linebacker Daren Bates to end the quarterback's work inside the 20 trying to score. Linebacker Sharif Finch had a couple sacks and a pressure that led to a facemask penalty.

Sharpe was impressed at the fan turnout.

"For them to stick around through the terrible weather, thunderstorms and rain and what not, just to have a turnout like we did tonight speaks a lot about the city of Nashville how they have our back," Sharpe said.