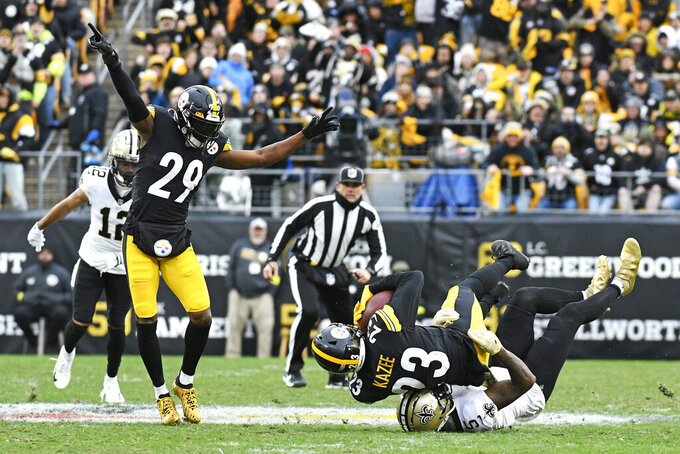 PITTSBURGH (AP) — To hear Damontae Kazee's teammates and coaches tell it, the chatterbox Pittsburgh Steelers safety never has a bad day. Ever.

They're fibbing. Well, kind of.

There was that day against Detroit in the preseason when Kazee went one way and his wrist went another. In a moment, all the progress Kazee made during a promising training camp vanished. So did — briefly anyway — the good-natured swagger that seems to pour out of every inch of his 5-foot-11, 174-pound frame.

“He was pissed,” said cornerback Arthur Maulet, who roomed with Kazee during training camp. “He's a highly, highly competitive guy. Nobody wants to be sitting out, especially when it was a freak injury like that.”

Kazee described the immediate aftermath as a return to “my dark days” similar to the ones he experienced after he tore his Achilles in his final season with Atlanta in 2020.

“Trying to manage being out and still staying with it football-wise, that was the hardest part,” Kazee said.

Kazee rehabbed in relative silence while the Steelers slogged to a 2-6 start in which every member of the starting secondary dealt with some form of injury. He figured to be a role player in Pittsburgh's three-safety package with Minkah Fitzpatrick and Terrell Edmunds when the team activated him off injured reserve last week.

Then Fitzpatrick underwent an emergency appendectomy less than 24 hours before Pittsburgh hosted New Orleans, information Kazee thought was “fake news” when it flashed across his phone only an hour or two after Kazee had seen Fitzpatrick at the team's walkthrough.

And there Kazee was last Sunday, ably filling in for a two-time Pro Bowler and coming up with his 13th career interception early in the fourth quarter that helped fuel a late surge in a 20-10 victory.

Kazee sprinted toward the cameras in the north end zone at Acisure Stadium to celebrate and thought about chucking the ball into the Allegheny River.

One problem. Kazee ran to the closed end of the field, not the open one that abuts the river. He chucked the ball into the stands anyway, although he says that's the last time because he doesn't want to pay the accompanying fine.

“I'm going to keep my money next time,” he said, with a laugh.

Asked why he didn't hold onto the ball as a keepsake, and Kazee shrugged. His first career interception came on a similar play in 2018 while playing for the Falcons, a game in which Atlanta happened to be facing Andy Dalton and the Cincinnati Bengals.

“I've already got an Andy Dalton ball at home, I didn't need another one," he said.

Fitzpatrick's status for Sunday's visit from the Joe Burrow-led Bengals is uncertain. If he sits, Kazee will be at the back end of the secondary. If Fitzpatrick plays, coach Mike Tomlin will find a way to get Kazee involved.

“He’s a physical guy, he knows how to get around the ball,” Tomlin said.

Those instincts became readily apparent early in his career with the Falcons, who moved Kazee from cornerback to safety in 2018. Kazee responded by tying for the NFL lead with seven interceptions. Heady territory for a player who is decidedly undersized for the position. He makes up for it with an intelligence culled from being picked on by opposing quarterbacks early in his career.

“He knows where a quarterback wants to attack because he’s been in those positions when the quarterback is attacking (smaller cornerbacks),” Maulet said. “So he knows where to lean to sometimes. He knows who needs help in coverage.”

Kazee's impact stretches beyond the field. In a group led by the quiet and borderline “grumpy” Fitzpatrick, Kazee is a livewire. It's not uncommon for him to playfully jaw with linebacker Myles Jack in the locker room, which led to Kazee getting “jumped” by seemingly half the defense following practice last week.

Kazee lay on the ground as they pretended to wail on him, the cackles of laughter echoing from one side of the room to the other. Kazee's near nonstop chatter offers welcome levity to a 3-6 team that begins the second half with considerable work to do if it wants to be a factor down the stretch. He's been in Pittsburgh all of six months.

He works the room, seemingly having something to say to nearly everyone. That’s just his way.

“The Lord woke me up, he gave me the opportunity to talk,” Kazee said. “I might as well use it.”