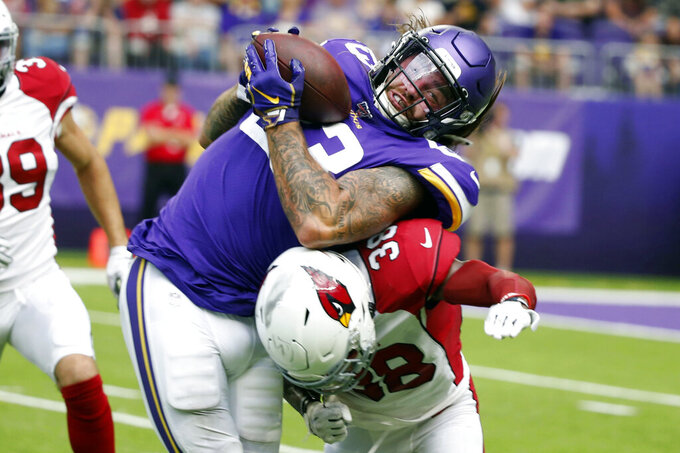 FILE -Minnesota Vikings tight end Tyler Conklin makes a reception over Arizona Cardinals safety Jalen Thompson (38) during the second half of an NFL preseason football game, Saturday, Aug. 24, 2019, in Minneapolis. Tyler Conklin has heard all about the New York Jets' woes at tight end the last several years. C.J. Uzomah has, too. The Jets' two newest additions at the position insist all that chatter — as well as the lack of catches and consistency — ends now.(AP Photo/Bruce Kluckhohn, File)

The Jets' newest additions at the position insist all that chatter — as well as the lack of catches and consistency — ends now.

“I think me and C.J. are going to turn around that whole tight end not being productive thing,” Conklin declared Friday during a Zoom call.

The Jets certainly hope so.

That's why they gave the 26-year-old Conklin a three-year, $21 million deal this week, and the 29-year-old Uzomah a three-year contract worth $24 million. General manager Joe Douglas threw some big but reasonable bucks to fill a void New York has been looking to fill for years.

And Douglas did it by bringing in two of the NFL's more productive tight ends last season.

“Right when I got the news, I was like, ‘Hey, I need his number. I need to talk to my guy and let him know we got this tandem in the tight end room right now and it’s about to be dirty,'” a smiling Uzomah said of Conklin on Thursday during his introductory Zoom call.

That's something the Jets haven't had at tight end in what seems ages. Dustin Keller had a career-high 65 receptions for New York in 2011, but only once in the 10 seasons since has a Jets tight end had more than 40 catches: Austin Seferian-Jenkins with 50 in 2017.

Part of that can be blamed on offensive schemes and some on the lack of consistent big-play talent.

“In this system, you need tight ends — you need two tight ends, for sure,” Conklin said. “And I think we complement each other really, really well, on and off the field. But I also think we can both do everything that a tight end needs to do, whether that's the run game, pass game, pass pro, we both do all that. And I think it was a really good fit.”

Both Conklin and Uzomah spoke highly of Wilson, the No. 2 overall pick last year who's coming off a down-and-up rookie season.

“Coming into free agency, one of the big things I wanted was to be with a young quarterback,” Conklin said, “especially him with his arm talent, mobility and things I’ve heard about him ... and how he approaches the game.”

Added Uzomah: “He’s going to make huge strides this year, and I’m hoping that I can be kind of a crutch for him if he needs anything, if he wants anything. Hopefully I can be a security blanket for him on the field as well.”

Neither tight end lacks confidence, and that came through in their meetings with reporters.

Uzomah spoke about how he expects to show the Jets and their fans they’re getting “one of the best damn tight ends in the league.”

Conklin talked about always being an underdog — he was a walk-on at Central Michigan — and getting a chance to shine last year after Irv Smith Jr. was injured before the season.

“I think I’m really just scratching the surface of what I can do,” Conklin said.

The additions of Conklin and Uzomah mark an overhaul at the tight end spot for the Jets, who had Ryan Griffin (27 catches), Tyler Kroft (16), Trevon Wesco (three), Daniel Brown (two) and Kenny Yeboah (two) at the position last season.

Griffin could find himself the odd-man out since he could save the Jets about $3 million on the salary cap if he's cut. Kroft is a free agent, as is Brown. Wesco is more of a hybrid tight end-fullback, so he could still have a role. Yeboah, Brandon Dillon and converted wide receiver Lawrence Cager are all young, developing talents at the position.

The keys, of course, will be Conklin and Uzomah — who have the Jets and their fans downright optimistic about their potential.

“Unlimited,” Conklin said. “I think me and C.J. can be one of the best, if not the best, tight end duos.”

NOTES: The Jets also officially announced the signing of former Texans defensive end Jacob Martin, and the trade of LB Blake Cashman to Houston for a 2023 sixth-round draft pick.