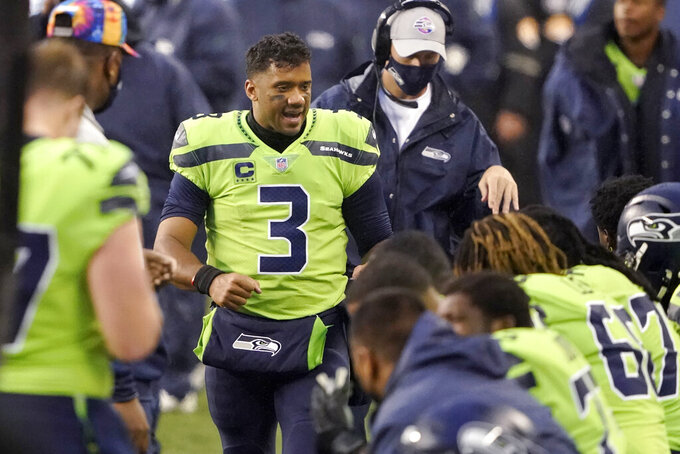 Seattle Seahawks quarterback Russell Wilson (3) talks with teammates on the bench during the first half of an NFL football game, Sunday, Oct. 11, 2020, in Seattle. (AP Photo/Ted S. Warren)

SEATTLE (AP) — Amid the celebration and the chaos of another heart-stopping final seconds, Pete Carroll’s attention turned to the empty seats of CenturyLink Field.

In a season when the Seattle Seahawks are off to their best start at 5-0, the head coach wished the circumstances were different.

“It’s so regrettable that you haven’t been able to enjoy it because you guys would have never gone home tonight,” Carroll said. “So, just speaking to our fans, I hope you had a ball with it, at home, or where you’re doing it. And I hope you guys believe like our guys believe."

Carroll may eventually get his wish for a greater celebration. The Seahawks were the first team in the league to reach 5-0 after Sunday’s 27-26 victory over Minnesota. It was another night filled with last-second drama, this time capped by Russell Wilson’s fourth-and-goal dart to DK Metcalf with 15 seconds left for the winning touchdown.

Despite some major flaws, especially on the defensive side, the Seahawks have taken control of the toughest division in the league. Wilson has been the elixir for all of Seattle’s ailments with five sterling weeks that put him at the head of the MVP conversation, and landed the Seahawks among the favorites in the NFC.

Wilson has 19 touchdown passes through five games, second most in league history. But the stats are secondary. Wilson’s play has given the Seahawks a level of belief that no matter the situation, they’ll find a way to pull it out — whether it’s a maligned defense stopping Cam Newton at the 1-yard line in Week 2 to beat the Patriots, or driving 94 yards for the winning score against the Vikings.

For the 34th time in his career, Wilson led a winning drive in the fourth quarter or overtime with the Seahawks either tied or trailing. It’s a remarkable number when considering it’s one-third of all the victories in his career. Sunday was Wilson’s 100th win, regular season and playoffs combined.

While Seattle was giving up big chunks through the air over the first four games, the run defense had remained solid despite not being extensively tested. Minnesota wasn’t afraid to run and that defense was exposed. The Vikings finished with 201 yards rushing, just the 10th time since Carroll arrived in 2010 the Seahawks have allowed at least 200 yards rushing to an opponent. The bye is coming at a great time for Seattle to revisit some of its defensive issues.

It’s getting harder for Metcalf to match the growing expectations, but the second-year receiver seems on the verge of becoming a league-wide star. He had six catches for 93 yards against the Vikings. He’s second in the league behind Arizona’s DeAndre Hopkins for most yards receiving through five weeks, but he’s still averaging a whopping 22.5 yards per reception.

Sunday was his second winning touchdown catch of the season after grabbing the decisive score in Week 3 against Dallas.

“That’s what Russ keeps harping on. There’s going to be a game changer. When the ball is in the air it’s always mine,” Metcalf said. “That was my thought process the entire drive.”

Cody Barton deserves credit for his play on Minnesota’s fourth-and-1 run with 2:00 remaining that was stuffed and gave Wilson a chance at the comeback. But other than that play, it was a tough night for the second-year linebacker who, despite finishing with 14 tackles, often found himself washed out of plays.

Defensive tackle Anthony Rush was the only player to leave Sunday’s game with an injury. Carroll said Rush’s knee swelled and he had fluid removed. The Seahawks are hoping to get S Jamal Adams (groin), RB Carlos Hyde (shoulder) and G Mike Iupati (knee/back) back after the bye.

21 — Seattle was the 21st team since 1991 to fail to convert a third down and still win. The Seahawks were 0 of 7 against the Vikings, but had the two key fourth-down conversions on the final drive. The last team to have zero third-down conversions and win? The Seahawks in a 2018 victory over Arizona.

Seattle will get a needed week off in order to get some key players healthy — most notably Adams. The Seahawks will need it with the most challenging stretch of their schedule upcoming beginning Oct. 25 at Arizona.