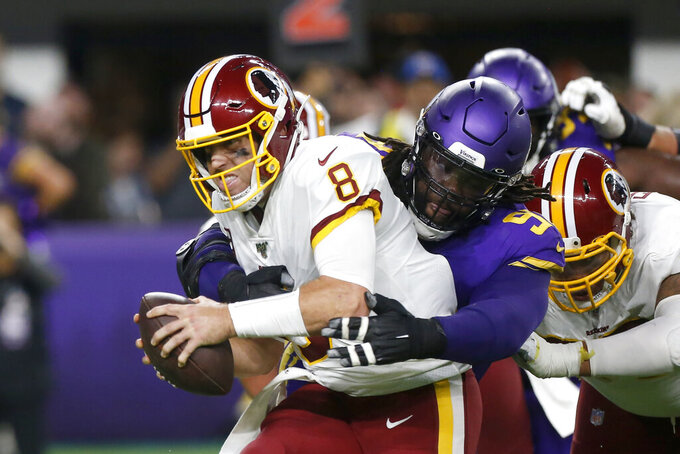 MINNEAPOLIS (AP) — Near the end of this methodical victory for the Minnesota Vikings, the crowd directed a loud cheer toward a player on the visiting team.

When Adrian Peterson appeared on the giant video screens during the 2-minute warning with an announcement of his latest climb up the NFL's all-time rushing list, the Washington Redskins running back took off his helmet, kissed two of his fingers and waved them to the fans who rooted for him in purple not that long ago.

The star of the show, though, was Peterson's successor. Dalvin Cook gave the Vikings yet another stellar performance.

Cook had 171 total yards and the game's only touchdown, helping Kirk Cousins beat his old team on the first try and carrying the Vikings to a 19-9 victory over the Redskins on Thursday night.

"It just shows how we can pull a win out. We've got a team that can go out and keep battling and keep fighting," Cook said. "That shows you the toughness that's in this group."

Cook, the NFL leader in yards from scrimmage, rushed 23 times for 98 yards and caught five passes for 73 yards for the Vikings (6-2) in their fourth straight win. Cousins went 23 for 26 for 285 yards without a turnover against the Redskins (1-7), who drafted him in 2012 and made him the full-time starter in 2015 before he became a free agent and signed with the Vikings in 2018.

"We talked during the week. You always have a little extra motivation when you're playing your old team. You're always trying to prove that they were wrong for letting you go or whatever the reason was, so I thought he handled it really well," Vikings coach Mike Zimmer said. "He's playing outstanding right now."

Nobody on the Redskins lately warrants that assessment. Case Keenum, the quarterback Cousins replaced, had his return to Minnesota spoiled by a concussion that kept him out of the second half and thrust rookie Dwayne Haskins back into action. Two plays after Daron Payne and Landon Collins stuffed Cousins for no gain on a fourth-and-1 quarterback sneak at the Minnesota 34, Haskins overthrew Terry McLaurin, and Anthony Harris intercepted.

Keenum's last time in the stadium was nearly two years ago, when his last-play touchdown pass to Stefon Diggs gave the Vikings a victory over New Orleans in a divisional round playoff game, but there was little reason to make this game a memory. Keenum went 12 for 16 for 130 yards.

Diggs caught all seven passes that came his way from Cousins, racking up 143 yards in his own tribute of sorts to the "Minneapolis Miracle." This game was for the guys in the ground game, though. Alexander Mattison added 61 yards on 13 rushes, and Minnesota more than doubled Washington's total yardage, 434-216.

Peterson had 14 carries for 76 yards and in the process moved up to sixth place on the NFL's career rushing list with 13,701 yards by passing Jerome Bettis and LaDainian Tomlinson.

"It was bittersweet because you come here to win a game," said Peterson, who played for the Vikings for 10 seasons from 2007-16. "Just coming back and seeing the love that they still have for me and they showed, it felt good. It was definitely a great home welcome. They welcomed me with open arms and just showed the love that they have and have for over a decade. So, it was a special moment. I had to hold tears back, to be honest with you."

Cook hugged Peterson on the field after the game.

"He was one of the guys that I watched," Cook said. "He's a special talent."

The same goes for Cook, who was drafted in the second round in 2017.

"If we keep him healthy, I hope one day he is in the Hall of Fame just because he's a talented guy," Diggs said. "He's a blessing."

The screen pass to Cook was the favored weapon, highlighted by a zigzagging 31-yard gain late in the second quarter that set up his 4-yard run for a score with 11 seconds left on third down. Offensive coordinator Kevin Stefanski made a bold inside zone call for Cook, who rewarded the confidence by powering his way through safety Troy Apke and cornerback Fabian Moreau at the goal line.

The Vikings ran a third-and-15 draw play to Cook from the 25 early in the fourth quarter before settling Dan Bailey's fourth field goal of the night, another conservative decision that even drew some boos from a crowd that was probably a bit bored at that point by a game bogged down by penalties and ball-control play.

"I think good teams can win a variety of ways," Cousins said. "I think we've been doing that the last few weeks."

Diggs went without a fumble over each of the last three seasons, and the Vikings recovered the two he had as a rookie in 2015. This year, he has already fumbled four times, the most in the league among non-quarterbacks, and the Vikings have lost three of them. Diggs also dropped what would have been a touchdown pass last week at Detroit, a catchable ball that slipped through his hands on third down in the fourth quarter.

Redskins: CB Josh Norman (thigh/hand) returned from a one-game absence, but he didn't play until CB Quinton Dunbar hurt his hamstring in the second quarter. Moreau started ahead of Norman. FS Montae Nicholson (ankle) was inactive, too, with Apke taking his place in the lineup. ... Backup SS Jeremy Reaves left the game with a concussion in the third quarter after a head-first hit on Diggs that also drew him an unnecessary roughness penalty.

Vikings: With WR Adam Thielen (hamstring) out, rookie WR Olabisi Johnson got his first start. ... CB Xavier Rhodes entered the concussion protocol in the third quarter but was cleared to return.

Redskins: Play at Buffalo on Nov. 3.