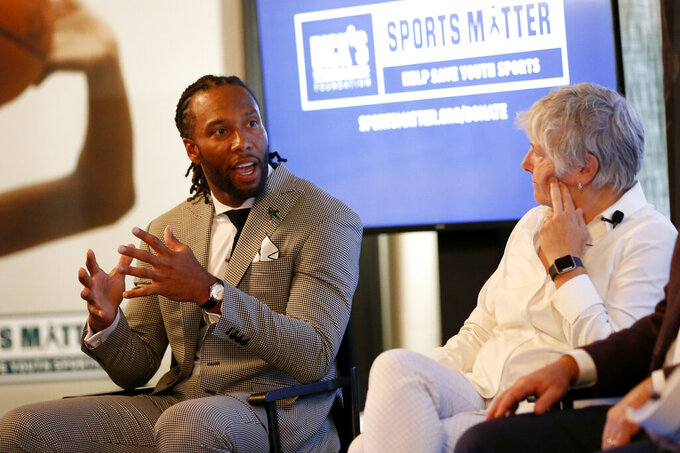 FILE - In this Thursday, July 18, 2019, file photo, NFL player Larry Fitzgerald, left, and Senior Director of Research and programs at The Women's Sports Foundation, Dr. Marjorie Snyder, serve as panelists at the DICK'S Sports Matter Panel Event in New York. Jon Gruden, Larry Fitzgerald and Alex Morgan have reached the summit of their professions. They all recognize the need for strong grass-roots sports programs, and they are doing something about it. Working with DICK’S Sporting Goods Foundation, that trio announced a pledge to provide access to sports for one million youngsters over the next five years. DICK’S will match up to $1 million in donations made by customers to its foundation. (Jason DeCrow/AP Images for DICK'S Sporting Goods, File)

NEW YORK (AP) — In some versions of a July 19 story about the Sports Matter initiative, The Associated Press erroneously identified the RAND Corp. as the RAND Institute.

A corrected version of the story is below:

As teams settle in at sweltering training camps this week, playbooks are distributed (digitally, of course), rookies and other youngsters try to catch the eye of decision makers, and fans wonder what their teams will look like in early September. And beyond. Except, perhaps, in New England.

Jon Gruden, Larry Fitzgerald and Alex Morgan have reached the summit of their professions. They all recognize the need for strong grass-roots sports programs, and they are doing something about it.

Working with DICK'S Sporting Goods Foundation, the three have pledged to provide access to sports for 1 million youngsters over the next five years. DICK'S will match up to $1 million in donations made by customers its foundation.

"It's a story we all know too well," says Gruden, the Oakland Raiders coach. "Kids can't afford to play and coaches can't afford to coach. It's a horrible and devastating problem. DICK'S is working to change that for a million kids and I love being a part of it."

Gruden cites several statistics from two studies, one by the RAND Corp. and another by the Women's Sports Foundation:

—24% of high schools not offering sports;

—42% of families of middle school and high school students do not participate in sports but have interest if costs were less;

—56% of teenage girls do not participate in sports.

"Kids learn so much on and off the field from playing soccer, and making it more accessible through programs like Sports Matter will only help grow the game," says Morgan, speaking with Gruden and Fitzgerald in midtown Manhattan. "Pay for play in soccer has become a big issue, but once the opportunity to play is there, we need to ensure coaches and programs make having fun a priority so kids continue to enjoy the game and don't burn out.

"When you see an investment in women's sports, you see the return that comes with it all the way down to the youth level. Soccer is a great game that has so much potential to lead the way to inspire more young girls to play and benefit from all that sports has to offer."

This year, DICK'S and its Foundation have provided more than $20 million in grants and sponsorships to support deserving schools and organizations, including $1 million to help build a gym for students at LeBron James' I PROMISE School in Akron, Ohio; $265,000 to the Beyond Sports Foundation for its Sport for Reduced Inequalities Collective Impact Award; and more than $780,000 to Girls on the Run to expand their mission to inspire young girls.

The foundation has created an advisory board. Among its aims is to focus on the challenges facing youth sports. In addition to Gruden and Fitzgerald, members are former NBA player Jalen Rose, beach volleyball gold medalist Kerri Walsh Jennings, LPGA champion Annika Sorenstam and skiing gold medalist Lindsey Vonn.

"Sports are one of those arenas where the color of your skin doesn't matter, where the god you worship doesn't matter, your sexual orientation doesn't matter, it's just about the game and being better," says Fitzgerald, a star receiver for the Arizona Cardinals. "I just want to be able to bring more kids to it and give them more opportunities to play."