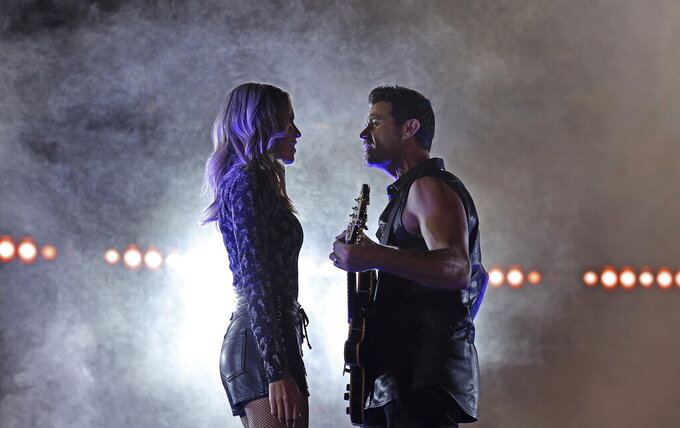 This July 25, 2019, photo provided by Jon-Paul Bruno shows Shannon Haley and Ryan Michaels shooting a music video at Levi’s Stadium in Santa Clara, Calif. NFL players’ dreams usually center on scoring touchdowns and making game-saving tackles. Then they watch videos of their performances. It’s not that much different for musicians, particularly the husband/wife country duo of Shannon Haley and Ryan Michaels. Their big play occurred in Levi’s Stadium, home of their longtime favorite team, the 49ers. (Jon-Paul Bruno via AP)

NFL players' dreams usually center on scoring touchdowns and making game-saving tackles. Then they watch videos of their performances.

It's not that much different for musicians, particularly the husband/wife country duo of Shannon Haley and Ryan Michaels.

Their big play occurred in Levi's Stadium, home of their longtime favorite team, the 49ers. What could be better than shooting a music video for your new single, "Hail Mary," on your team's field — and produced by that team, as well?

"We wrote it about the time we were struggling in the music business and in our lives, and felt like, being huge football fans, we were at the point of the game when you threw a Hail Mary," Haley says. "That is where we were in our lives.

"We had this insane idea and dream that if we get in touch with the 49ers, they will be open to listen to us."

They were. Niners vice president Rob Alberino reached out and wound up not only directing and producing the video, but inviting Haley & Michaels to perform at halftime of the Monday night game with Cleveland on Oct. 7.

"Working on high-level productions like the shoot that occurred at Levi's Stadium is something our production team looks forward to," he says. "Anytime you can turn a world-class venue into a stage while a band like Haley & Michaels puts on a show, the final piece is amazing and that's exactly what happened."

Nowhere would be more fitting for the couple than Levi's Stadium.

Haley grew up in Los Altos, California, and though her mother's side of the family rooted for the Packers, her dad was all 49ers. She would spend weekends with her father "watching football all day," then re-watch the games. She even went to elementary school with one of Joe Montana's daughters.

Michaels was raised in Palo Alto, and was a standout in soccer who even played in an international tournament. He was most struck by the "class" the Niners showed under Hall of Fame coach Bill Walsh and his two Hall of Fame quarterbacks, Montana and Steve Young. To Michaels, the way the team reacted in defeat was as impressive as how they celebrated all those Super Bowls.

So the duo had a natural connection before they hooked up in music — and in life.

Now, as they try to make their way in a business as competitive as the NFL — recently opening for megastar Jason Aldean was a major step — Haley & Michaels are getting support from the team they've supported most of their lives.

"We finally are with Sony ATV (on the new label Hickory Records/RED Music) in a record deal and getting our first real shot at radio," Michael says. "So we told the 49ers, 'Anything you guys can do, it would be amazing to be part of it.' They came back and offered not only play for us to play 'Hail Mary' at halftime on 'Monday Night Football' against the Browns, but Rob had also the idea to direct the music video."

The couple went back to Levi's Stadium, where the fog machine was in full use, their names and logo were on the video, and did 40 takes for the video.

"We've done everything you could want with the 49ers and the song, and now we can retire," Michaels says as he and his wife break out in laughter.

Clearly, they have much more to shoot for, on the stage and, they hope, on the Niners' field.

"We will always try to bring the football team into our career," Haley says. "It was one of my favorite moments in my whole life. They had jerseys made up for us. They heard our music and 'Hail Mary,' and wondered how they could support us as we shared our love for the 49ers."