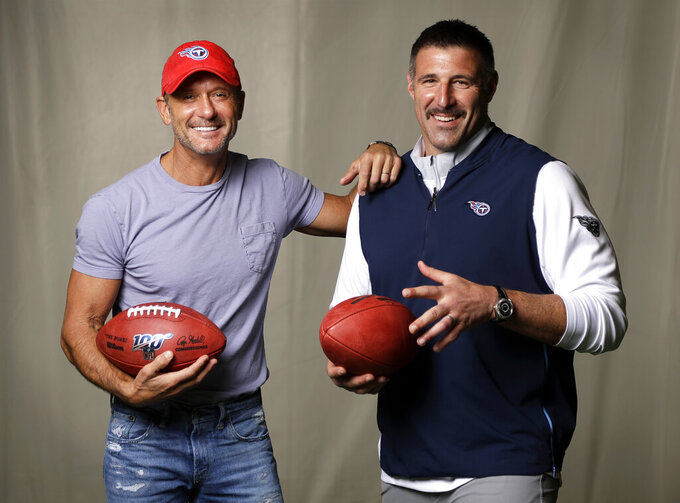 CORRECTS TO THE SECOND DAY OF THE NFL DRAFT, ON APRIL 26 - In this April 18, 2019, photo, country music star Tim McGraw, left, poses with Tennessee Titans head coach Mike Vrabel in Nashville, Tenn. After the second day of the of the NFL Draft in Nashville on Friday, April 26, McGraw will cap off the evening performing on the draft stage across the Cumberland River from Nissan Stadium, home of the Tennessee Titans. (AP Photo/Mark Humphrey)

NASHVILLE, Tenn. (AP) — Country music star Tim McGraw watched as Philadelphia hosted the NFL draft in 2017 with more than 250,000 people on hand and immediately had a vision of how to make the three-day event even better: Bring it to Nashville and add the Music City touch.

"My first thought was, 'Man I'd love to be down there and do a big concert right in the middle of Broadway down there with the stadium as a backdrop for the weekend of the draft,'" McGraw said. "I just thought it was something very special and I wanted to be involved with it. And I wanted to get it here."

McGraw will cap Friday night performing on the draft stage across the Cumberland River from Nissan Stadium, home of the NFL's Tennessee Titans.

McGraw sat down with coach Mike Vrabel and The Associated Press at the Titans' practice facility for a conversation about why hosting the NFL draft means so much to Nashville, a country music town that has grown by leaps and bounds since the late Bud Adams first talked of bringing his Houston Oilers to Tennessee in 1995.

That's when McGraw was first breaking out as a country artist, his own dreams of playing professional baseball ended by a knee injury, traded for a guitar.

Vrabel was finishing his college career as an All-American at Ohio State, while McGraw played the honky tonks on Broadway and Printer's Alley before he started touring.

"As the stadium was going up, it just really filled everybody with a tremendous amount of pride and expectation having an NFL football team come to your place, and then to take over that side of the river and make it a place that's a destination and make it something that really, really beautifies the city and makes the city look like a big city," McGraw said. "And I think that for me anyway, I couldn't be more excited about it.

"I mean every day you'd see it go further and further up, and you just couldn't wait for the first games to be played there."

An Ohio native and Cleveland Browns fan, Vrabel was aware that the Oilers were looking for a new home. He even played as a rookie with Pittsburgh in the Oilers' last game in Memphis as nomadic lame ducks in 1997. He was with the Steelers in 1999 for a visit to the renamed Titans' brand-new stadium.

McGraw chimed in: "The crowd noise?"

"That was a new sight for me, I think, just playing in some older stadiums when I got into the league, or college stadiums," Vrabel said. "This seemed to have a real new urban feel to it with the bright red beams."

McGraw's investment in football continued to grow when he joined Adams as a minority owner of the Arena League's Nashville Kats in late 2004. Now the Louisiana native is a three-time Grammy-winning artist who has sold more than 37 million albums in the U.S. alone, according to the Recording Industry Association of America. Some of his biggest hits include "Humble and Kind," ''Live Like You Were Dying," ''Don't Take The Girl," and "Highway Don't Care." McGraw is also an actor, appearing in movies such as "Friday Night Lights" and "The Blind Side."

Nashville was considered a bit of a longshot to host the 2019 draft. Vrabel took part in a uniform unveiling on April 4, 2018 that drew approximately 20,000 for a fashion show and free concert. That was Nashville's last chip in swaying the NFL, with a lobbying push from Titans controlling owner Amy Adams Strunk. League owners chose Music City last May.

"She wants to be able to show the NFL that we can have a first-class event and be an organization that can help the NFL," Vrabel said of Strunk. "Now we want people to come and enjoy the concerts, enjoy the fan experience, and I think she's excited to show them that, to have the stadium as a backdrop and then obviously enjoy everything that's going on on Lower Broadway."

Vrabel has friends and family coming into Nashville who will get to enjoy all the music and parties of draft weekend. Heading into his second season with the Titans, Vrabel will be busy as the Titans try to improve a roster that went 9-7 in his debut year.

A country music fan, he's usually standing about 5 feet away from the latest anthem singer before home games, and his wife and son have to point out when a celebrity is on the sideline. Vrabel stays focused on the task at hand.

"No idea who's here or why they're here," Vrabel said. "I hope they have a good time, and I hope that we can win. And I'll see you guys in three hours."

Handling the anthem is something McGraw stays away from, though not for political reasons. He says he absolutely butchered the anthem once and nailed it another time, so he prefers to leave that to his wife, fellow singer Faith Hill, who performed it for the Titans' lone Super Bowl appearance in January 2000.

McGraw performed at the NFL's tailgate show before the Super Bowl in February, also has done a concert on Pro Football Hall of Fame weekend, and he will perform a free concert Friday night after the final selection in the third round is called.

Some musicians reportedly turned down offers to perform at the Super Bowl over Colin Kaepernick not being in the NFL. McGraw said he bases his decisions on his love of football and the lessons sports teach.

"The other stuff I get and understand, and I'm certainly all for people speaking their minds and progressing themselves and learning more about each other," McGraw said. "I'm all for that. But for me when I make my decision, I love the game and I love the spirit of the game and that's what I try to capture."

It's almost showtime for a gig that McGraw, also a member of Nashville's organizing committee, has anticipated for months, on a stage at the base of Broadway's honky-tonk district.

Nashville has hosted very big parties for the 2017 Stanley Cup Final, the annual Country Music Association awards, and New Year's Eve. This will be bigger, with 100,000 fans expected each day.

A house band will play between draft selections Thursday and Friday night, and Dierks Bentley will perform Saturday as part of more than 20 Nashville-based acts ranging from alt-rock to hip-hop and more country.

"We have sort of an opportunity to plant a flag and say this is the way it's supposed to be done," McGraw said. "And I think we've got the right people here in Nashville. I think it's the right setup, the right enthusiasm and the right sort of combination of people to make this thing something really special, and something big and sort of be the watermark for drafts to come."