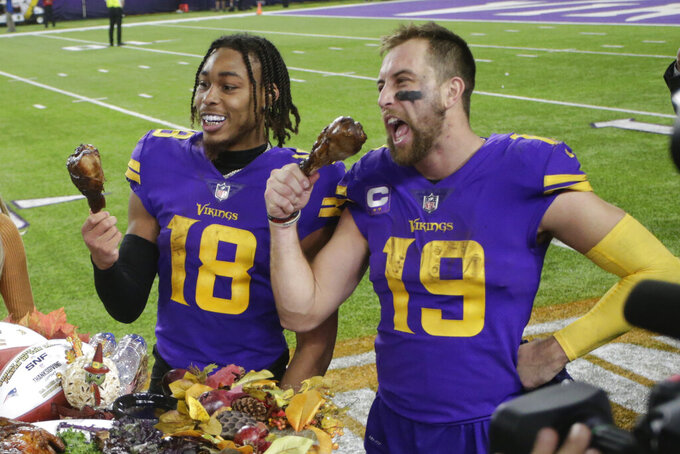 MINNEAPOLIS (AP) — Somewhere along the line this season after Kevin O'Connell was hired as Minnesota's coach, Kirk Cousins found the consistent winning touch in the clutch that too often was missing for him.

One of the NFL's most scrutinized quarterbacks delivered again for the 2022 Vikings, with three touchdown passes including the tiebreaking score in the fourth quarter to beat New England 33-26 on Thursday night.

O'Connell made special mention of Cousins and his performance on the prime-time stage against a vaunted defense in his postgame speech to the players in the locker room. Eight wins for Minnesota (9-2) have come by one score.

“You don’t play like he did tonight without really starting to develop some ownership of our offense,” O'Connell told reporters.

Cousins has felt the confidence of his coaches and teammates like never before — “it almost brings me to tears,” he said during a candid postgame news conference — and turned that support into an increased comfort on the field. The 59-59-2 career record as a starter that he carried this year has begun to take better shape with this season the resilient Vikings have been assembling.

“That’s something that we continually try to talk to him about,” wide receiver Adam Thielen said. “Just go out there and play football. You’re a dang good football player and you prove that week in and week out. You show how tough you are. You show how prepared you are.”

The strangest — or perhaps most fitting — part is that Cousins currently has the worst passer rating of his career (88.2) to rank just 21st in the NFL. As satisfied, or relieved, as he has been with all the wins the Vikings have enjoyed this year, Cousins is a perfectionist who can't help himself pick apart his play. He threw one interception against the Patriots and, he pointed out, could have had two more.

“Thankfully we’ve been finding a way to win in spite of it being Year 1 in this system. There have been moments where you feel like, ‘Man, we, I’ve got to be better here on offense for us to go where we want to go.' I think that’s where you still feel like you’re developing.”

After Cousins was sacked a career-most seven times by the Cowboys, his time to throw was vastly increased despite the absence of left tackle Christian Darrisaw. O'Connell was at his play-calling best with quicker throws and shorter drops for Cousins, ample help for Darrisaw's sub, Blake Brandel, and a commitment to the run despite a lack of production that allowed the Vikings to stay in their play-action passing attack. Cousins was sacked only once.

"We used a lot of different techniques on the edges to try to condense that rush, try to let Kirk have some clean pockets," O’Connell said.

Whether it was a lack of pressure over the first three quarters, injuries forcing fourth-stringer Duke Shelley into the starting lineup at cornerback or an overall vulnerability with the way defensive coordinator Ed Donatell arranged their coverages, the Vikings gave Patriots quarterback Mac Jones too much space down the field on a night when he had a career-high 382 passing yards with a season-high 119.8 passer rating. The Vikings have been outgained in total yardage in four straight games.

Kene Nwangwu, who had two kickoff return touchdowns as a rookie last season, finally broke free with a 97-yard score immediately after the Patriots reached the end zone with relative ease on their opening drive of the second half.

Greg Joseph has five missed extra points, the most in the NFL this year. Including his 2018 season with Cleveland, Joseph has an 87.9% cumulative conversion rate on extra points that is the worst among kickers over the last five years with more than 35 attempts, according to Sportradar data. Joseph is 94 for 107, with four misses in 2021.

With 10 days to recuperate, the Vikings ought to be closer to full strength for their next game.

Defensive end Dalvin Tomlinson (calf) was listed as questionable for Thursday, so he's on track barring a setback to return from a four-game absence. Cornerbacks Cameron Dantzler Sr. (ankle), Akayleb Evans (concussion) and Andrew Booth Jr. (knee) were all sidelined against the Patriots, and Dantzler must miss one more game on injured reserve. In the concussion protocol for a second time in successive weeks, Darrisaw has an unclear path back to the lineup.

The Vikings can clinch the NFC North by beating the New York Jets next week and getting some help. They would need Jacksonville to win at Detroit on Dec. 4 and Green Bay to lose either of its next two games: at Philadelphia on Sunday or at Chicago on Dec. 4.

More important for the Vikings, given the state of the division beneath them, is their place in the NFC. Their loss to the Eagles (9-1) looms large as a potential tiebreaker for the first-round bye. They have a two-game edge in the loss column on NFC West co-leaders San Francisco and Seattle for the No. 2 seed that would come with home games in the first two rounds.