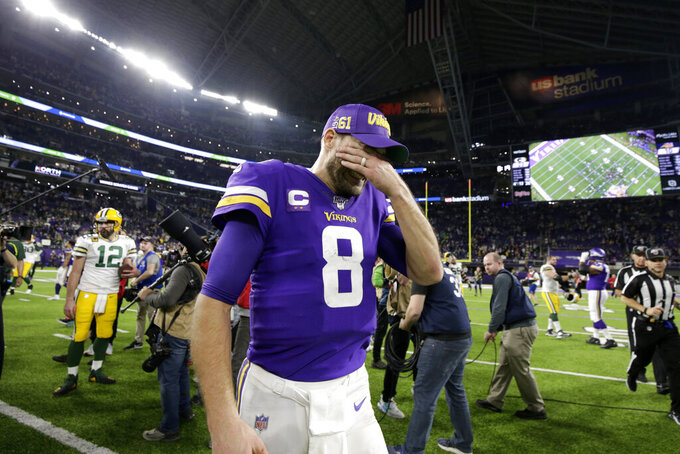 MINNEAPOLIS (AP) — Asked during the week about Kirk Cousins’ winless mark on Monday nights, Minnesota coach Mike Zimmer told reporters that if his team lost to Green Bay, it wouldn’t be because of Cousins, who’s having a career year in his second season with the Vikings.

This lackluster offensive performance might not have fallen solely on Cousins, but the $84 million quarterback was unable to pull the offense out of its lethargy against a stifling Packers defense in a 23-10 defeat on Monday night.

Cousins finished 16 for 31 for 122 yards, one touchdown and an interception for a 58.8 quarterback rating. Fair or not, he fell to 0-9 as a starter in his career on Monday night. Far more relevant than the time of kickoff or the day of the week was that Cousins’ two worst games of the season came against the Packers, who clinched the NFC North.

“I’m not going to get into this Kirk Cousins on Monday night thing and all this stuff,” Zimmer said after the game. “Offensively, we didn’t play as well as we could play. I’ll say that, OK. Defensively, we could play the run better. So, there’s a lot of things that we need to clean up.”

Even at home, where they were 6-0 coming into the game, the Vikings had just 139 yards of offense. Their longest drive was 31 yards, they had seven first downs on 13 possessions, and they were 4 of 15 on third down.

“When you don’t convert third downs, go three-and-out, you just don’t have that many plays,” Cousins said. “You don’t have many bites at the apple to get going. We certainly did not play well enough from start to finish tonight.”

They had prime opportunities in the first half, after three takeaways by the defense gave them the ball in Green Bay territory each time.

After Eric Kendricks returned a fumble to the 10-yard line to set up Minnesota's first possession, Mike Boone ran for 5 yards. Then Cousins threw two incompletions to fullback C.J. Ham, the second thrown too high and hard for Ham to catch as it sailed out of bounds and the Vikings settled for a field goal.

After a rare interception by Aaron Rodgers, Cousins capitalized with a touchdown pass to Stefon Diggs for a 10-3 lead.

“They couldn’t play-action pass,” Packers defensive tackle Kenny Clark said. “That’s their bread and butter. They get easy completions for Kirk Cousins. We got a chance to get him to drop back on third down so we could do our job.”

It wasn’t the first time.

Cousins had a season-low 52.9 passer rating in a 21-16 loss at Green Bay earlier this season, including an interception by Kevin King in the end zone with 5:17 remaining when the Vikings had first-and-goal from the 8.

King intercepted Cousins in this game, too, snaring a deep pass intended for Diggs in the third quarter. The Packers then drove 53 yards in eight plays for the go-ahead touchdown.

With the loss, Minnesota was locked into the sixth seed in the NFC playoffs.

“Certainly the Packers beat us tonight, so we’ve got to go back and look at how, why and certainly the answers to those questions, in theory, should be of some help going forward, not just if we play them again but in general,” Cousins said. "So we’ll have to study that, and that will be the silver lining is just learning from the mistakes so they get corrected. Then when games up ahead are being played, they don’t repeat themselves.”