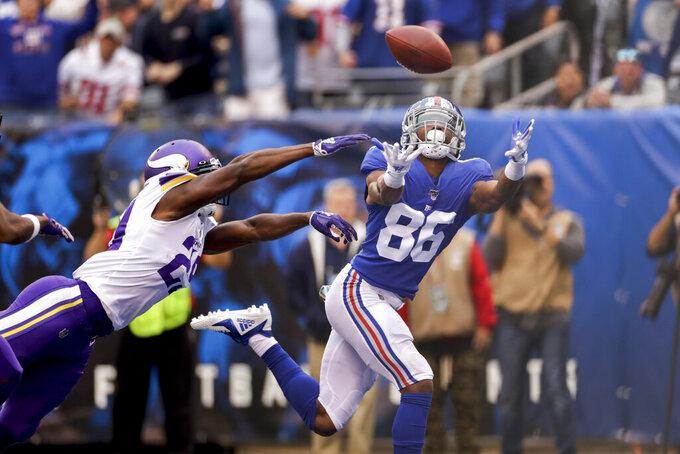 EAST RUTHERFORD, N.J. (AP) — So much for the Minnesota Vikings being one dimensional. The passing game is back in synch with the run.

Add in the defense, and the reality is the Vikings have it all.

Kirk Cousins threw two touchdowns to Adam Thielen, Dalvin Cook ran for 132 yards and the Vikings made life miserable for Daniel Jones and the New York Giants in every way possible in a 28-10 victory Sunday.

"We played well from the jump," said Cousins, who was 22 of 27 for a season-high 306 yards. "I thought it was a very balanced attack today through the pass game and the run game. The screen game added variety to the offense. I thought Dalvin showed why he's such a special player."

The win came just a week after the Vikings (3-2) did little in a 16-6 loss to the Chicago Bears and Thielen insisted the team had to stop being one dimensional, relying solely on the run.

And that's exactly what Minnesota did. It hit the Giants (2-3) with a bit of everything — pass, run and the defense — in ending the two-game winning streak Jones engineered since replacing Eli Manning at quarterback. The Vikings gained 490 yards on offense, including 211 rushing, and took a knee inside the New York 5 to end the game.

The Vikings defense limited New York to 211 yards, sacked Jones four times and hit him countless other times. The Defense also chipped in with a safety when linebacker Anthony Barr tackled Jon Hilliman in the end zone after New York recovered Cook's fumble at the 1.

Cousins touchdown passes covered 15 and 9 yards to Thielen, who complained about the one-sidedness of the offense after a two-catch, 6-yard game against Chicago. He finished with seven catches for 130 yards.

The 15-yard, second-quarter touchdown pass capped a 98-yard drive and gave Minnesota a 10-0 lead. The shorter toss ended a 67-yard drive after New York got to 18-10 in the third quarter.

"I feel great. It was huge for the team, huge for the locker room," said Cook after failing to score a touchdown for the first time this season. "It's been a long week, there's been a lot trying to separate us and I think that just brought us more close as a group. I'm just proud of the guys with the way they fought back, blocked that outer noise and came in here and played in a hostile environment."

Dan Bailey hit field goals of 31, 48, 32 and 45 yards for Minnesota, which scored on four of its six possessions in the first half. The fifth ended in a fumble inside the 5-yard line and the sixth on a last play Hail Mary.

Jones finished 21 of 38 for 182 yards and an interception. He threw a 35-yard yard touchdown pass in the second quarter to fellow rookie Darius Slayton , getting New York to 10-7.

The No. 6 pick overall gave the Vikings' defense credit, admitting there wasn't as much space to run or time to throw on some plays. He also said he needs to make plays and there were chances he missed, including two throws to Sterling Shepard that might have been scores.

Bailey added two field goals after Jones' TD pass and Barr got his safety, pushing the lead to 18-7.

Aldrick Rosas pulled the Giants to 18-10 with 32-yard field goal that capped a 15-play drive that opened the second half, but Cousins and Thielen connected again as the Vikings ended a five-game skid in outdoor stadiums.

Thielen has a habit of rebounding after bad games. The two-catch game last week was his second-lowest since 2016. He went without a reception once, on Dec. 18, 2016, vs. Colts. He followed with career-high 202 yards on 12 catches for two TDs vs. Packers.

Giants starting RB Wayne Gallman, in for Saquon Barkley, was lost to a concussion in the first quarter. .... No other injuries were announced.

Giants: at New England to face Patriots on Thursday night.