Covert joins all those Hall of Famers he made look good 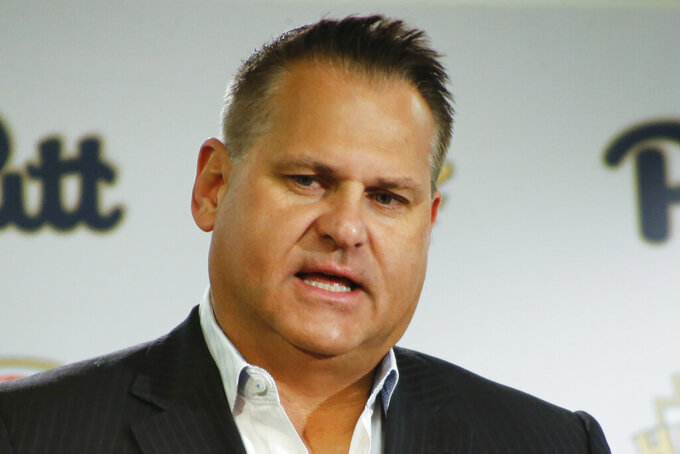 FILE - Former Pittsburgh and Chicago Bears offensive lineman Jim Covert speaks at a news conference for the retirement of his number 75 college jersey before an NCAA college football game between Pittsburgh and Notre Dame in Pittsburgh, in this Saturday, Nov. 7, 2015, file photo. Jimbo Covert made the people he played alongside look good, and after a nearly two-decades-long wait, the tough Chicago Bears left tackle will join them in the Pro Football Hall of Fame. (AP Photo/Keith Srakocic, File) 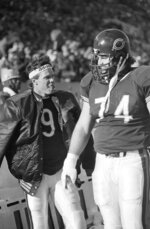 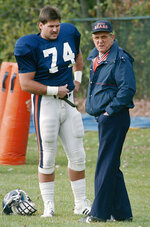 Jimbo Covert made his name by making others famous first. Maybe that explains the wait.

He was recruited by Jimmy Johnson and finished up at Pitt just in time to join the revving-up Chicago Bears. There, beginning in 1983, Covert opened up running lanes for Walter Payton, walled off the blind side for “punky QB” Jim McMahon, and won a three-game, high stakes duel with Lawrence Taylor by making the Giants’ linebacking legend look positively ordinary.

“He was one of the best in my 30 years of football,” said coach Bill Parcells, to drop another name who thinks Covert should have been in the Hall of Fame before now. “Other guys had to have help against Taylor.”

Yet Covert did need help to join the Centennial Class of 2020. A two-time All-Pro, he anchored an offensive line that swept the Bears to a Super Bowl championship and six division titles in seven years, but played only eight seasons total. He was selected to the NFL’s 1980s All-Decade Team, despite losing large chunks of the 1987-88 seasons to the nagging back injuries that eventually cut short his career.

His eligibility for the hall, beginning in the mid-'90s came and went. Covert would make the ballot, but never made it to the semifinal round.

“You just kind of waited,” he said in a recent videoconference. “Then you got to the point where you go, ‘I don’t want to think about it.’ But it’s always in the back of your mind.”

And it wasn’t just Covert. Facing a backlog of deserving players, the hall elected 10 senior candidates to the 20-person centennial class. Covert got the news in January 2020, but the pandemic-delayed enshrinement ceremony was pushed back 18 months.

“Waiting for so long makes it even that much sweeter,” he said.

In a nice bit of serendipity, Covert will enter the hall alongside Johnson, who was an assistant coach at Pitt when he recruited the big (6-foot-4, 277-pound) local hero to protect a quarterback and future Hall of Famer named Dan Marino.

At Pitt, Covert shared the credit with Russ Grimm, another future Hall of Famer, and Mark May, both of whom became part of the famed “Hogs” offensive line in Washington. When Covert arrived in Chicago in 1983 as the No. 6 pick overall, the team was just beginning to jell, and he took on a bigger leadership role.

With one of the NFL's best defenses ever and Payton in the backfield, the Bears wore out opponents on both sides of the ball and led the NFL in rushing every season from 1983 to 1986. Assessing his career now, Covert called those his salad days: “I played as well as any tackle – maybe 20 years before that as well.”

Lucky for him, that run also included plenty of big games. After San Francisco beat Chicago 23-0 in the 1985 NFC championship game, Covert recalled a few 49ers joking afterward, “Bring an offense next time.” That taunt made the offensive unit determined to match the intensity of the Bears' defense. Practices were battles. They made the 1985 Bears special.

“We went back out there (later) in 85,’” Covert laughed, “and we brought an offense that time.”

Then there were those one-on-one clashes with Taylor; two came in the postseason and the third was the 1987 regular-season opener, matching the past two Super Bowl champs, both with a penchant for trash talk.

Covert held Taylor, the most disruptive player in the game, without a sack in all three meetings. Equally impressive, he did it almost singlehandedly.

“I just felt like, in order to for us to be successful in those three games, I had to do my job and I had to do it well,” Covert recalled.

That became harder midway through the 1987 season, after he began dealing with what became chronic back issues. After spending the 1991 season on injured reserve and then retiring, Covert carved out a second career in business and is currently an operating partner in a private equity firm.

His induction this year, along with the late Ed Sprinkle, gives the Bears 30 Hall of Fame players, the largest class in the NFL. He couldn’t help lobbying for one more: defensive tackle Steve McMichael, recently diagnosed with a ALS.

“In my opinion, there was a four- or five-year period there in the mid-'80s when no one played the inside position better. He deserves consideration,” Covert said.

“I had a few scraps with him, but we were like brothers," he added. "I’ll be thinking about him that day, you bet.”