COVID-19 changed NFL in 2020 and some shifts are permanent 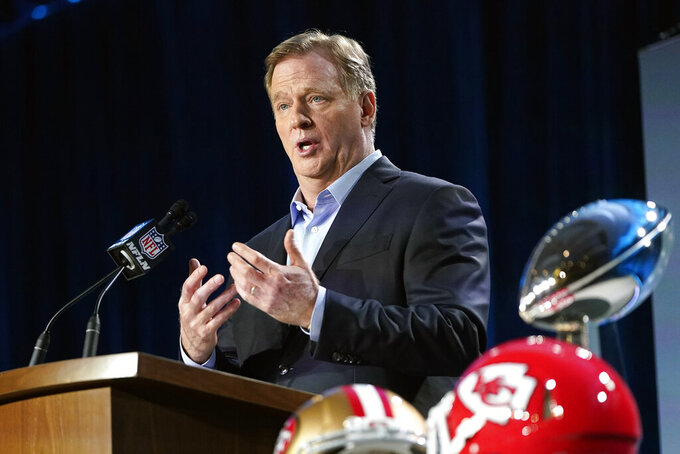 FILE - NFL Commissioner Roger Goodell answers a question during a news conference for the NFL Super Bowl 54 football game in Miami, in this Wednesday, Jan. 29, 2020, file photo. Playing through the COVID-19 pandemic has yielded countless lessons for a league that was born in the shadows of the 1918 Spanish Flu pandemic. Goodell said the league will confer with the players union after the Super Bowl to discuss what measures might make sense keeping once the crisis subsides. (AP Photo/David J. Phillip)

Through plenty of potholes, seas of empty seats and enough piped-in crowd noise to make broadcasts sound like sitcom laugh tracks, the NFL is about to put the wacky and worrisome 2020 season in its rearview.

A final slate of games Sunday will determine the other half of the expanded 14-team playoff field that will culminate, providing all continues to go as planned, with the crowning of a Super Bowl 55 champion in February.

Then the league will turn its attention yearningly to it hopes is a post-COVID-19 landscape.

Navigating the 2020 season during the novel coronavirus crisis has yielded many lessons for a league born in the shadows of the world's last pandemic in 1918.

Commissioner Roger Goodell said the NFL will confer with the players union after the Super Bowl to discuss what measures might make sense keeping once this crisis subsides.

“This has been a period of learning. I think it’s forced us to think differently and innovate, and we’ll look at that and see how we implement it going forward,” Goodell said.

All these steps were taken to keep teams as safe as possible as they played through a virus outbreak that has claimed more than 330,000 American lives and upended the global economy.

“Our experience with the offseason training and doing that virtually, I think our clubs got comfortable with a lot of that,” Goodell said. “And I think you’ll see more of that, which I think will be productive.”

Players may have found cumbersome wearing masks at practice, working from home like millions of others, and going in for daily COVID-19 tests. They also appreciated the lighter workload in the offseason and shorter workdays during the season.

“I think that’s one of the positives you can take from this year is we’ve been able to try out and see a bunch of different things,” said Browns center J.C. Tretter, the president of the NFL Players Association. He mentioned the virtual offseason, slow ramp-up to training camp contact, and roster flexibility.

“These are all things because of COVID we’ll be able to look at and see what we want to move forward with, and it’s given us the ability to do that because of this unique year and us having to find unique solutions to the problems that COVID has brought,” Tretter said.

“But I think there are a lot of important things that we can continue to build on and continue to change in our game that only helps the players and the teams.”

With the coronavirus vaccinations in their earliest stages, it’s a near certainty the NFL will see a virtual version of the annual scouting combine in 2021. That likely will be followed by teams again relying on videoconference visits to woo free agents and interview draft prospects.

Even if teams return to some form of in-person offseason training, there’s no going back completely to how things were before the world was rocked by COVID-19.

“I can see potentially a lot of things living from how we did our draft and implementing some of that coming up this year,” Goodell said. “We spent a lot of time in our collective bargaining agreement talking about how do we do our offseason in a way that promotes the health and safety of our players and also getting into the ramp-up to the season, including training camp period -- we call it the acclimation period -- and how we do that. We had an extended acclimation period because of the lack of time on the field during the offseason.

“I think we have data, research that we want to evaluate with the NFLPA, look at that and see what went well, what might not have gone so well," added Goodell. "I’m certain that we’ll make modifications collectively to do that. The rosters are always a discussion that we have. We obviously will consider all of that and see if there’s the increased flexibility we had this year is something we want to carry over to future years.”

Competitive play in 2020 showed that the offseason programs had probably become too much, but injuries early on and slow development for some rookies also proved that the answer wasn’t eliminating the on-site, offseason work altogether.

“Anybody who’s followed our sport for a long time knows the one thing about NFL football: change is hard,” NFLPA executive director DeMaurice Smith said. “And there’s always been suggestions about different ways of doing things. This year I’ve enjoyed the games probably more than any other single year I’ve had the job. It’s been exciting. They’ve been thrilling.”

So, the overall product didn't really suffer from the modifications, Smith said.

“I think these things have been good this year,” Smith said. “And sometimes necessity is the mother of invention, even in the National Football League.”

Broncos coach Vic Fangio said the change he appreciated most was the expanded practice squad, which allowed teams to sign veterans such as defensive tackle Sylvester Williams, who provided valuable depth and production for Denver at age 32.

“It’s long been proven -- although it’s been tried -- that I don’t think we’ll ever have a minor league system in pro football,” Fangio said. “The more guys you can have that are on rosters around the league that can still develop and not be out on their own, I think is a good thing.

“As for some of the other stuff, we’ve all become virtual- and Zoom-educated,” Fangio added. “I’m sure there’ll be some use for that moving forward. But hopefully we can, at some point, get back to somewhat normal.”