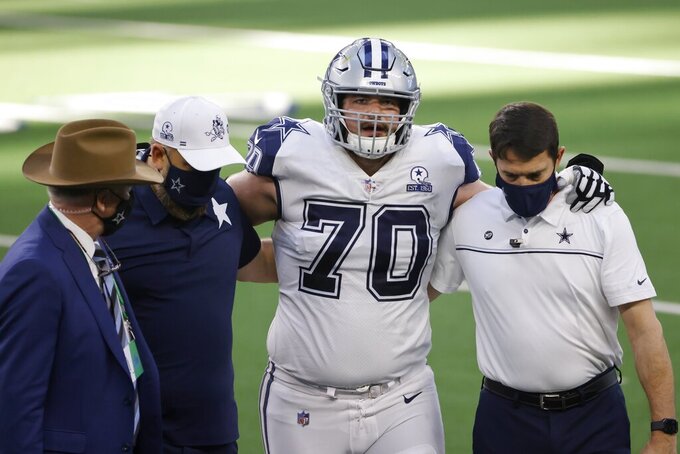 Dallas Cowboys guard Zack Martin (70) is assisted off the field by team medical staff after suffering an unknown injury in the first half of an NFL football game against the Washington Football Team in Arlington, Texas, Thursday, Nov. 26, 2020. (AP Photo/Ron Jenkins)

Dallas downgraded cornerback Anthony Brown (ribs) and safety Donovan Wilson (groin) to out for Tuesday night's game at Baltimore. It will be the fifth game Brown has missed because of his rib injury. Wilson was injured in Cowboys' most recent game, a 41-16 loss to Washington on Thanksgiving.

With Brown and Wilson out, the Cowboys signed cornerbacks Deante Burton and Rashard Robinson to the active roster from the practice squad.

Martin had moved from right guard to right tackle because of other injuries on the offensive line. He went out on the first Dallas drive against Washington, aggravating a calf injury that had kept him out of practice at times.

If Martin doesn't return, the Cowboys will finish the season without their three best offensive linemen. Tyron Smith was limited to two games by a neck injury that required surgery, and La'el Collins never played before hip surgery.