Cowboys’ Bennett visiting Pats after brief stint with them 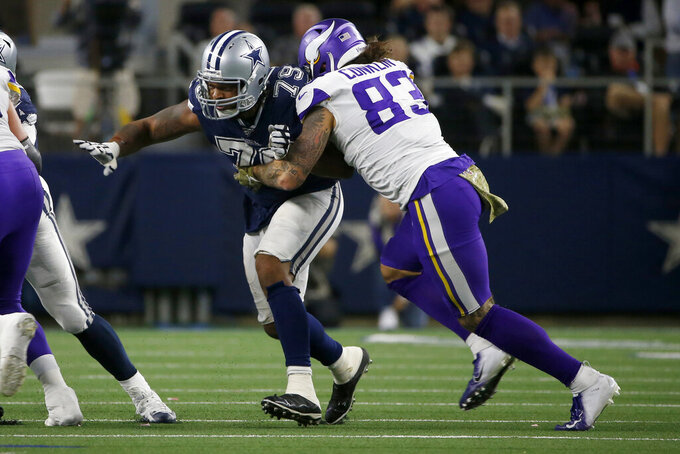 As for the trade that brought him to the Cowboys almost as soon as Bennett returned from a one-game suspension over a “philosophical difference” with defensive line coach Bret Bielema, the 12-year veteran wasn’t quite as verbose.

“I’m not the coach,” Bennett said this week when asked why it didn’t work out in New England. He returns there with the Cowboys (6-4) to face the Patriots (9-1) on Sunday, exactly a month after he was traded for a conditional late-round pick in 2021.

Bennett joined the Patriots in an offseason trade with Philadelphia, where he spent one season as an NFC East rival of the Cowboys. In six games with New England, Bennett had 2½ sacks.

“I learned a lot of football in New England,” said Bennett, who has 68½ career sacks. “I think at the same time as a player you go into the situation and you think you know football, then you meet somebody who’s above you and knows everything about the game.

“I learned what it feels like to break down a game plan from a different perspective and I think it was good for me as a player. If I ever want to be a coach it would be a good situation to take into that.”

And that’s where the appreciation for Belichick comes in.

“At the end of the day, I just think Bill is a great motivator,” Bennett said. “I think he understands football from the beginning. He’s a historian when it comes to football, plays. He can remember anything when it comes to it.”

After winning a Super Bowl in Seattle and playing for the Eagles when they were the defending champs, Bennett shared a locker room with a six-time title winner in Brady.

“I think Brady’s just a cool guy,” Bennett said. “There’s lot of people on teams where the guys are like the best player and they don’t spend a lot of time with each individual, but I think Brady is a very approachable player. I think he does a great job of bringing guys together and also just hanging with everybody. I think that’s what makes Brady one of the best leaders in the NFL.”

Bennett had a strong advocate on the Dallas coaching staff in Kris Richard, who calls the plays on defense while serving as passing game coordinator and defensive backs coach. Richard was with the Seahawks all five of Bennett’s seasons there.

With that level of comfort, Bennett produced right away and has 3½ sacks in three games, becoming one of 11 NFL players to record multiple sacks with at least five teams.

The Cowboys made the move not long after versatile defensive lineman Tyrone Crawford decided on season-ending hip surgery after trying to play through the issue. Bennett shares the ability to rush inside and outside.

“He fits this system,” Richard said. “He fits our style of defense. He plays with that tenacity, that intensity. Losing Tyrone, it was a natural fit.”

Coach Jason Garrett was familiar with Bennett in part because his younger brother, tight end Martellus Bennett, was a second-round pick by Dallas when Garrett was the offensive coordinator in 2008.

“I think he’s interacted really well and transitioned really well,” Garrett said. “A lot of our guys knew him already. He’s jumped right in and trying to understand how we coach and how we want him to do things. Embraced that fully. I think he’s made a really positive impact on our team.”

The fit has been good enough that the Cowboys picked the 34-year-old for the pre-game pep talk on the field before last week’s 35-27 victory at Detroit.

“I think it’s always hard when you’re on a new team and you’re trying to jell with new players,” Bennett said. “At the same time, I think we’ve been through a lot of adversity already within the team.

“We’ve got a lot of growth. It’s a lot of football that’s being played in September and October, but I think November and December are kind of where champions are made.”

Bennett started this season with the defending champions, and now gets to play them.