Cowboys can clinch maligned NFC East with win over Eagles 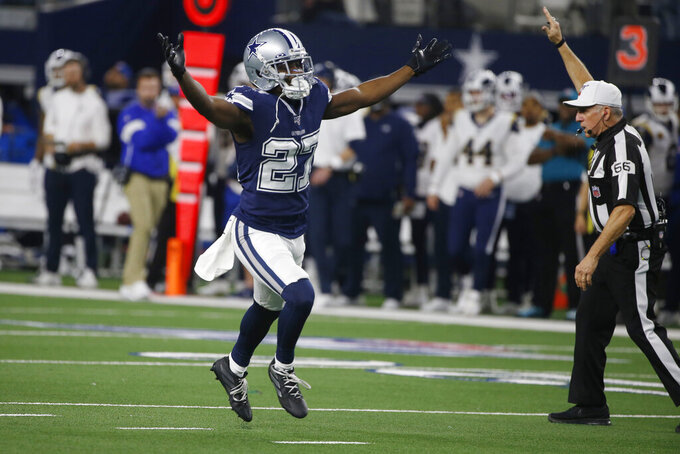 Dallas Cowboys cornerback Jourdan Lewis (27) celebrates after a tackle in the second half of an NFL football game against the Los Angeles Rams in Arlington, Texas, Sunday, Dec. 15, 2019. (AP Photo/Ron Jenkins)

PHILADELPHIA (AP) — Dak Prescott is banged up with a sore shoulder, a finger injury on his throwing hand, and took limited snaps in practice.

Even with nagging — or worse — injuries, Cowboys owner Jerry Jones expects Prescott to be in "top form" against Philadelphia.

Prescott is set to tough it out in the game of the season for the Cowboys.

The Cowboys can win the NFC East with a win over the Eagles on Sunday, a division that seemingly no team wanted to win.

Both teams are 7-7, and a playoff berth is still in play for the Eagles. Beat the Cowboys and win in Week 17 against the Giants, and they're in, two seasons after winning the Super Bowl.

There are jobs and reputations on the line, as well: Dallas coach Jason Garrett could save his job with a division title and a strong playoff run. Eagles QB Carson Wentz could prove to a fanbase that still adores former backup Nick Foles that he can win big games late in the season and show his worth in the postseason.

The Eagles are 2½-point underdogs at home for a reason -- the Cowboys won by 27 in their first matchup and they are 7-2 in Philly under Garrett. The Cowboys have won five of their past six games at Philly.

Aches and all, Prescott is ready to keep the wins rolling.

"He's as tough as they come," Garrett said. "His physical toughness and mental toughness are on par with anybody I've been around and that's just what he's all about. He handles success. He handles adversity. He handles issues as well as anybody."

Dallas running back Ezekiel Elliott is 5-0 against the Eagles and has averaged 163 scrimmage yards per game with three touchdowns (two rushing, one receiving) over that span. He sat for a meaningless regular-season finale in 2016 when the Cowboys had all but clinched the top seed in the NFC. The other missed game against Philadelphia came in 2017 during Elliott's six-game suspension.

The two-time rushing champion said he doesn't have any special memories of the rivalry with the Eagles.

Led by Wentz, the Eagles rallied on the final drive in two straight weeks to beat the Giants and Redskins and thrust themselves back into the playoff picture. Missing his top three wide receivers, Wentz relied on tight ends Zach Ertz and Dallas Goedert, his running backs and former college quarterback Greg Ward to win at Washington.

"He's understanding the game, and it takes time," Eagles coach Doug Pederson said. "With young quarterbacks and young players in this league, it takes time, and that's where he's headed and it really has been good to see the last couple weeks."

The timing of the Pro Bowl announcement was good for the Dallas offensive line. For the fifth time in six seasons, left tackle Tyron Smith, right guard Zack Martin and center Travis Frederick were selected to the Pro Bowl. The only exception was last year, when Smith and Martin made it but Frederick didn't because he missed the entire season with Guillain-Barre syndrome, an autoimmune disorder that attacks the nervous system.

While there have been questions about the Dallas front because of an uneven running attack with Elliott, the Cowboys are coming off a season-high 263 yards rushing against the Rams. Elliott and rookie Tony Pollard each had more than 100 yards in the same game for the second time this season, a first for the Cowboys.

Despite the up-and-down rushing attack, the Cowboys are leading the NFL in total offense, and Prescott is in the top five of fewest sacks for a quarterback.

Yes, in a matchup between two mediocre teams, Wentz is playing one of the true must-win games of his career. He tossed a 2-yard touchdown pass to Ertz in overtime to beat the Giants and followed up on the road with a TD pass to Ward to beat the Redskins. Wentz knows the stakes mean this start could represent his defining moment in Philadelphia.

"You could probably say that," Wentz said. "It's definitely a big game. We know the situation. We know what's going on."

What else is going on? Wentz has a fumbling problem, at least one in each of the past seven games. He's lost five of 12 fumbles over that span, a streak that started when he lost two in the Oct. 20 loss at Dallas.

"When I'm moving in the pocket, I've got to keep two hands on the ball and be more cognizant of who and what's around me," Wentz said.

Dallas was effective in the passing game against the Rams, with Prescott throwing for 212 yards and two touchdowns without having to pass much in the second half because of a 28-7 halftime lead. But none of the receivers had more than one catch. Multiple grabs came from tight ends (Jason Witten with four, Blake Jarwin with two) and running backs (Elliott with three, Pollard with two).

No. 1 receiver Amari Cooper had one grab just three games removed from his first without a catch in Dallas since the midseason trade last year.

"I think it was just a function of how the game went," coach Jason Garrett said. "When they had opportunities, they made plays. Coop made an unbelievable play on that third down when Dak scrambled to the right, climbing the ladder, making a contested catch like that."

The Cowboys signed 2014 Super Bowl MVP Malcolm Smith this week to bolster an injury-filled linebackers group. Smith had an interception return for a touchdown and a fumble recovery when Seattle blew out Denver to win the championship.

While it's unclear if Smith can get up to speed fast enough to play against the Eagles, the Cowboys might not have much choice. Rookie Luke Gifford was placed on injured reserve after breaking his arm against the Rams. Sean Lee has battled pec and thigh injuries. Fellow veteran Joe Thomas has a knee injury that could keep him out. Leighton Vander Esch remains sidelined with a neck injury.

Smith was with Jacksonville briefly this season. He never was a full-time starter with the Seahawks, but had that role in 2015-16 with Oakland. The Jaguars released him last month.