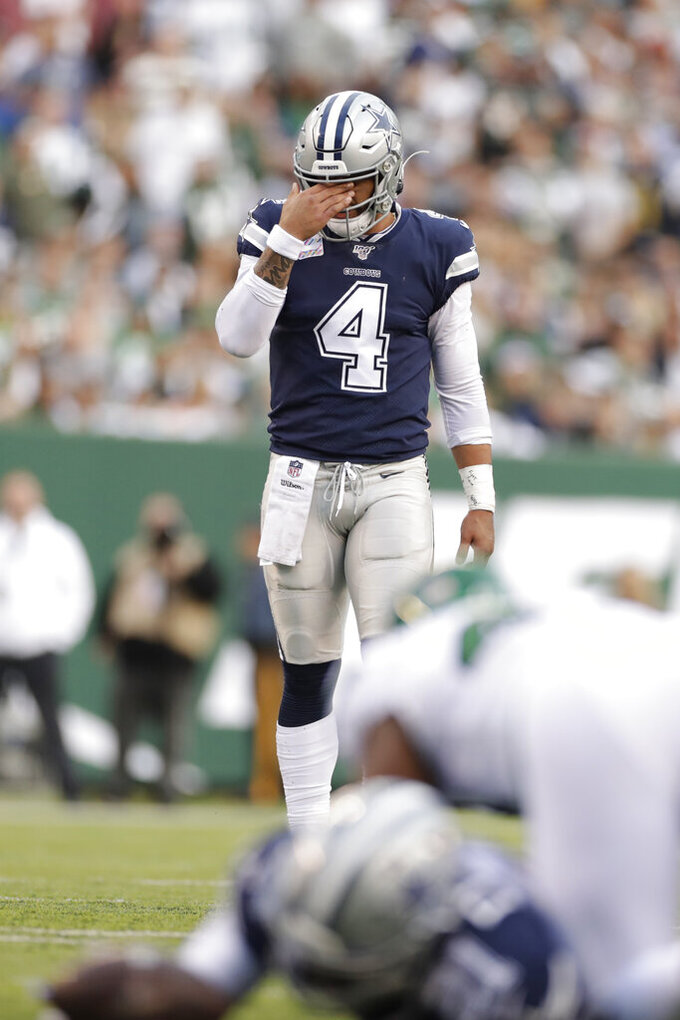 FRISCO, Texas (AP) — Before scoring touchdowns on five straight possessions and cruising to a comfortable win over the New York Giants in the opener on their way to a 3-0 start, Dak Prescott and the Dallas Cowboys stalled on their opening drive and fell behind.

The slow starts have been much worse during the three-game losing streak that has dropped Dallas back to .500. Combine the deficits against Green Bay and the previously winless New York Jets in the past two losses, and the Cowboys were down 52-6 before coming back.

It's the biggest part of the puzzle the Cowboys must solve against Philadelphia on Sunday night with first place in the NFC East on the line. The teams are tied at 3-3.

"I've said it before, until we figure it out, that's been what's hurting us," Prescott said after last weekend's 24-22 loss to the Jets, who were 0-4. "We've got to start faster.

"I know we have the right men, the right coaches, and the right people to get it done. We've got a huge (game) next week, so that's what matters now — getting it done before next week."

Prescott pinpointed the offense as the key to the issue for not giving the defense a chance to play with a lead. But the defense shares plenty of responsibility.

The best case in point came in the shocking loss to the Jets, when coach Jason Garrett passed on a field goal down 7-3 late in the first half and went for it on fourth-and-2 from the New York 7-yard line.

After Prescott was dropped for a loss on a sweep, Chidobe Awuzie was too aggressive and safety Jeff Heath took a poor angle on San Darnold's 92-yard touchdown pass to Robby Anderson. Just like that, the Jets were up 14-3 on their way to an 18-point first-half lead.

"Ultimately, we haven't executed," Garrett said. "Everything we do goes into execution, so everyone has a responsibility for that, every coach, every player who is involved in each of the units of our football team. So we haven't executed well enough early on in games."

Heath says the danger for a defensive player is getting anxious about making a game-changing play when things don't go well early. The seventh-year player thinks the loss to Green Bay was the best example. The Cowboys were down 14-0 quickly, and 31-3 before rallying.

"We were down 14-0 early and then I think errors just started to pile up because we felt like we needed to make these difference-making plays to turn the whole game around," Heath said.

"The way to win is you've got to keep hammering. You've just got to hunker down, focus on your job and just keep doing that and then hopefully there's enough time to where you can come back."

Each of the past two weeks, the Cowboys have been criticized by TV commentators for appearing to be emotionless on the sideline during the first half. Cornerback Jourdan Lewis wasn't saying that was the problem — but he was saying that's the solution.

"Just go out there on fire," said Lewis, whose interception sparked the comeback against the Jets. "Just clean up the details and be on our details earlier. Not having to clean up stuff at halftime that we know and we saw already."

The trick is trying to understand why the Cowboys aren't on the details earlier.

"I couldn't tell you honestly," Lewis said. "I can tell you that we're definitely going to fine-tune those things."

The Cowboys are second in the NFL in total offense, but something inside those numbers also illustrates the slow starts. In the 34-24 loss to the Packers, Prescott had his second 400-yard game of the season after having just one his first three years.

Dallas also had its most yards ever in a loss (563) — through trying to erase the four-touchdown deficit after several promising drives early didn't lead to points.

"It just comes down to execution of the plays and not shooting ourselves in the foot and just starting fast," running back Ezekiel Elliott said. "We moved the ball last week. We moved the ball down the field. We've just got to find a way to get the ball in the end zone."

NOTES: A day after announcing defensive lineman Tyrone Crawford would have hip surgery and miss the rest of the season, the Cowboys signed another one in Justin Hamilton. He played four games for Kansas City last season. ... Offensive tackles Tyron Smith (ankle) and La'el Collins (knee) still haven't returned to practice. ... WRs Amari Cooper and Randall Cobb also didn't practice. Cooper aggravated a thigh injury early against the Jets, and Cobb didn't play in New York after showing up on the injury report last week with a back issue.