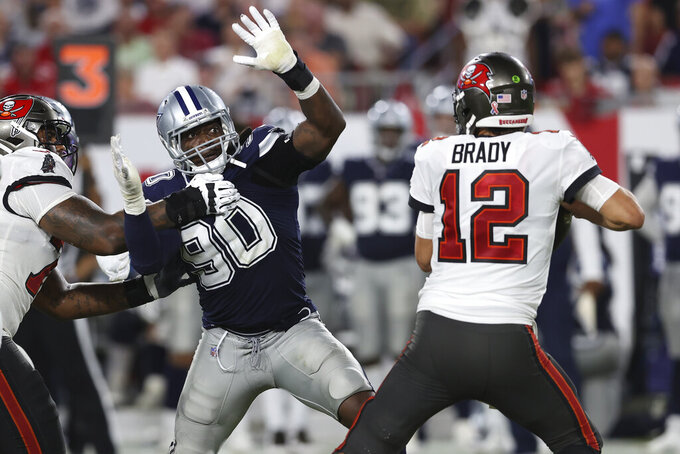 FRISCO, Texas (AP) — Dallas defensive end DeMarcus Lawrence broke a foot in practice Wednesday and is expected to miss at least six weeks, another blow to the starting lineup since a promising opener for the Cowboys.

Lawrence left the field during the first practice in preparation for Sunday's visit to the Los Angeles Chargers, the team said on its website. The two-time Pro Bowler, who is expected to be out 6-8 weeks, tweeted that he planned to return.

The injury to Lawrence came with the Cowboys planning to be without their other starting defensive end in Randy Gregory, who tested positive for COVID-19 after playing in the opener, a 31-29 loss to Super Bowl champion Tampa Bay.

Coach Mike McCarthy didn't seem optimistic Wednesday when asked about Gregory's availability against the Chargers, which means the club could be without four starters from the loss to the Buccaneers.

Receiver Michael Gallup strained a calf in the opener and was placed on injured reserve, sidelining him at least three weeks. The day after the game, right tackle La'el Collins was suspended five games for violating the NFL's substance-abuse policy.

Dallas should get one important player back against LA. Four-time All-Pro right guard Zack Martin was activated from the COVID-19 list this week after missing the trip to Tampa.

The Cowboys are losing their best pass rusher in Lawrence, who is in the third year of a $105 million, five-year contract. While Lawrence hasn't had a double-digit sack season since 2018, he consistently grades among the league's best in pressuring the quarterback and is a strong run defender.

The injury will end a streak of 65 consecutive regular-season games for Lawrence, who was plagued by injuries his first three years. He missed the first eight games as a rookie in 2014 after breaking a foot in training camp.

Without Lawrence and Gregory, Tarell Basham and Dorance Armstrong are the projected starters. Before Lawrence was injured, McCarthy said Armstrong would be the primary replacement for Gregory.

Basham is a fifth-year pro with 59 games and 12 starts, most of those with the New York Jets over the past two seasons. Armstrong, a fourth-round pick by Dallas in 2018, has played in 47 games with three starts.

Second-year man Bradlee Anae and rookie third-round pick Chauncey Golston are the backup ends. Golston missed time in the preseason with a hamstring injury, but was listed as a full participant in practice Wednesday.