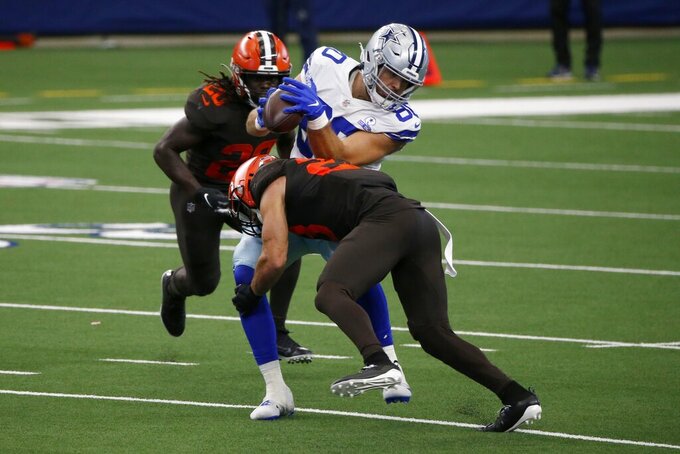 ARLINGTON, Texas (AP) — The Dallas Cowboys defense is giving up points at a rate unseen since the franchise's winless inaugural season six decades ago, and their offense keeps giving up the ball even while scoring in bunches.

“There was a lot of good football that will go totally unrecognized. That’s what happens when you lose,” coach Mike McCarthy said. “What I don’t like, is I don’t like the pattern of the four games that we’ve played. The points are outrageous, the time of possession is totally lopsided, and we’re minus-7 in the turnover ratio. That’s not a winning formula.”

Quarterback Dak Prescott and running back Ezekiel Elliott lost fumbles on consecutive offensive snaps in the second quarter, turning a tie game into a two-touchdown deficit before halftime on the way to a 49-38 loss Sunday to the Cleveland Browns.

While Prescott became the first NFL quarterback to throw for at least 450 yards in three consecutive games, the Cowboys (1-3) allowed a franchise-record 307 yards rushing and are the first team since the Raiders in 2012 to allow 38 or more points three games in a row in the same season. The only time the Cowboys had ever done that was during their 0-11-1 debut in 1960.

“We’ve just got to do a better job of preparing and really coming with our full hearts in the game and play this game for 60 minutes straight,” defensive end DeMarcus Lawrence said. “It's just all about going down and really showing that you’re a real man out there and playing together."

Even with three touchdowns in the fourth quarter, all followed by successful 2-point conversions, the Cowboys couldn’t pull off another big comeback victory, like two weeks ago in winning McCarthy’s home debut when Prescott and Elliott also had lost fumbles against Atlanta.

The Cowboys then had turnovers on consecutive plays last week at Seattle — on their last snap of the first half, and then first snap after halftime in a 38-31 loss.

“We keep hurting ourselves on offense, putting our defense in bad spot. And not starting fast enough, that’s what’s been killing us over the past few games,” Prescott said. "That’s definitely frustrating, is just making the same mistakes over and over.”

In the home opener, the Cowboys trailed Atlanta by 20 points in the first quarter, when Prescott and Elliott had two of their three lost fumbles, and were still down 15 in the fourth. The game-ending field goal in a 40-39 win was set up after the Falcons, a team known for blowing leads, curiously watched an onside kick attempt without jumping on the ball.

Cleveland recovered the onside kick the Cowboys tried after Prescott's second TD pass to rookie CeeDee Lamb to get within 41-38 with 3:42 left. On the next play, Odell Beckham Jr. took a reverse handoff for a 50-yard touchdown.

“We need to play better complementary football. Right now, it’s not happening,” McCarthy said. “We’re a come-from-behind team, and that’s not the way you win consistently.”

The game was tied at 14 in the second quarter when Prescott was sacked by Myles Garrett and fumbled, setting up Baker Mayfield's touchdown pass that put Cleveland ahead to stay. Elliott fumbled on the first play of the next drive, leading to another Browns touchdown.

Prescott's 20-yard touchdown pass to Amari Cooper on fourth-and-2 put the Cowboys ahead 14-7. But that came four plays after another near turnover. Linebacker Sione Takitaki had both hands on the ball, but couldn't hold on for an interception, the ball instead deflecting forward to Lamb for a 19-yard gain.

“We need to start games better and we need to do a better job of bringing our preparation to the performance,” McCarthy said. “When your team performs and makes similar mistakes, four weeks is a pattern. So this pattern needs to stop.”