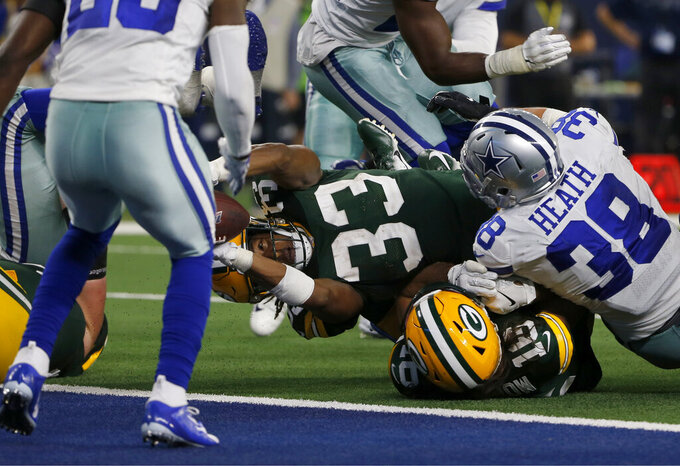 Green Bay Packers running back Aaron Jones (33) reaches over Jake Kumerow (16) and Dallas Cowboys' Jeff Heath (38) into the end zone for a touchdown in the second half of an NFL football game in Arlington, Texas, Sunday, Oct. 6, 2019. (AP Photo/Michael Ainsworth)

FRISCO, Texas (AP) — Jeff Heath agrees the Dallas defense hasn't had the impact it did early last season, when that unit often covered for a sagging offense and kept the Cowboys from falling too far out of the playoff picture.

The seventh-year safety also doesn't want to overstate how he and his defensive mates were playing a year ago.

"The idea that we were this perfect defense last year is just not true," Heath said. "I think it's something that you're always trying to get better. The results of these last three games haven't been what wanted them to be. But I think we have the right approach."

After a 3-0 start, the Cowboys have lost three straight games but are still tied atop the NFC East at 3-3 with Philadelphia. The Eagles visit on Sunday night.

While the first loss — 12-10 at New Orleans — was the first time since 2002 that the Cowboys have lost without allowing a defensive touchdown, Dallas couldn't get a quick stop in the fourth quarter.

The Cowboys had to use their timeouts before getting the ball back with 1:39 remaining. After quarterback Dak Prescott was sacked on the first play, Dallas eventually ran short on time and had to throw a desperation pass from midfield on the final play.

In a 24-22 loss to the previously winless Jets last week, Dallas let New York drive to a field goal after getting within five points in the fourth quarter. The Cowboys answered with a touchdown to get within two, but the 2-point conversation attempt failed with 43 seconds remaining.

"We haven't been as consistent as we've wanted to be on the defensive side of the ball," coach Jason Garrett said. "And we want to do a better job making some impact plays, taking the ball away. But I think in general we've done a good job keeping the scores down, which is the No. 1 thing a defense needs to do."

The Cowboys are eighth in scoring defense at 19 points per game after finishing sixth last season. And Dallas is back in the top 10 in total defense after a slow start while the offense was generating nearly 500 yards and more than 30 points per game through the first three.

But Dallas is near the bottom in takeaways (five) and interceptions (two), an area that has kept the unit from being elite under defensive coordinator Rod Marinelli. As much as he talks about forcing turnovers, the defense is designed to avoid big plays.

That's been another problem for the Cowboys, highlighted by Robby Anderson's 92-yard touchdown catch last week. Dallas is in the bottom third in the league in allowing plays of at least 20 yards.

Last season, the Cowboys were among the best in the NFL in limiting big plays.

"There's been times where I think we've played well, at other times that we haven't," Heath said. "It's really hard to pinpoint what the main difference is. It just as a whole we've just got to be more disciplined."

Linebackers Jaylon Smith and Leighton Vander Esch, emerging young stars last season with several highlight-worthy plays each, haven't shown up much this year. Neither player was in the locker room this week when it was open to reporters.

"It's a matter of time," passing game coordinator and secondary coach Kris Richard said. "We all set a very high standard for ourselves, them in particular. They're more than capable. We take the responsibility. We go out there and we know we need to perform."

Dallas still has a relatively young defense. Sean Lee (33 years old) is the only starter not in his 20s, and six of them are 25 or younger. At the same time, most of them have been starters for at least two years.

"There's no question we have some guys who are young that haven't played that much football but we have some veteran players too," Garrett said. "It's a good mix. We like the mix and we just have to keep banging away."