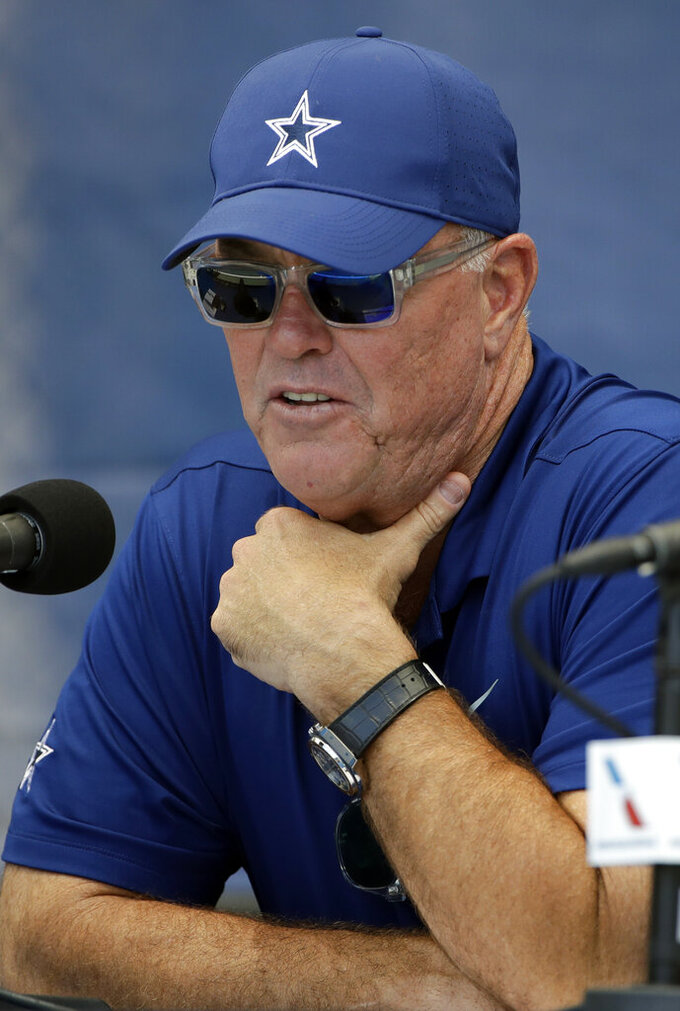 OXNARD, Calif. (AP) — Though his math was a little fuzzy, Dallas Cowboys owner Jerry Jones opened training camp by making a point that every player on the roster was under contract.

What Jones really had in mind while mentioning 80 players when it should have been 90 was one in particular: star — and how holdout — running back Ezekiel Elliott.

Once the questions began on reporting day Friday, Jones declared Elliott "late." With two years left on his rookie deal, the two-time NFL rushing champion wasn't around for a physical or conditioning test a day after missing the team's flight to California.

The first practice is set for Saturday, with no indication that anything will change with Elliott. One of Elliott's representatives didn't return a message seeking comment.

The fourth overall choice in the 2016 draft, Elliott is due to make $3.9 million this season and $9.1 million in the fifth year, which was a team option since the former Ohio State star was a first-round pick.

An opening day of the talk dominated by Elliott's absence wasn't what the Cowboys in mind with expectations of getting past the divisional round for the first time since the last of the franchise's five Super Bowl titles nearly 25 years ago. But Jones was undeterred.

"I don't want to seem cavalier about it, but I also don't want to be unrealistic being alarmed about it," Jones said. "This is the air we breathe. And if you flared and knee-jerked or went just because you have parts of it that need addressing, you wouldn't be able to manage."

While Elliott has been among the league's most productive backs while helping the Cowboys win two NFC East titles in his three seasons, the 2016 All-Pro also has had off-field issues.

Elliott was suspended for six games over domestic violence allegations in 2017, and was recently cleared by the league office for his part in an incident with a security guard in Las Vegas earlier this year.

Jones went to great lengths to defend Elliott during the investigation over the domestic case, even threatening to sue his fellow owners over a contract extension for Roger Goodell when Jones was upset with the commissioner over Elliott's punishment.

"All of that comes to mind," Jones said. "My time with Zeke has been based on just that, supporting him. And I do support him. I think he has a fabulous future here. So maybe I should be sure and say that."

Speaking of fuzzy math, the standoff with Elliott is reminiscent of Jones' contract stalemate with Emmitt Smith in 1993 after the first of three Super Bowl victories for Dallas in four seasons.

As Jones remembers it, Smith wasn't under contract — and Smith himself was adamant that his situation was a negotiation, not a holdout. But there were initial reports of a four-year deal after Smith's long holdout as a rookie in 1990, and Smith had just finished his third season on his way to becoming the NFL's all-time leading rusher.

There's nothing murky about Elliott's contract status, and Jones will have to hope that's not the only difference. When Smith remained unsigned two games into the 1993 season, the Cowboys lost both before a deal suddenly got done and Dallas went on to a second consecutive title.

Darius Jackson is the only experienced running back on the roster, and all six of his carries for 16 yards came in a meaningless regular-season finale at the New York Giants last season when Dallas had already wrapped up the division.

The Cowboys drafted two running backs this year and are particularly high on fourth-rounder Tony Pollard out of Memphis. Mike Weber Jr. was a seventh-round choice from Ohio State.

"When someone is not there, step up, next man up and let's see what you got," coach Jason Garrett said. "It's a great opportunity for us as coaches to evaluate that player, see if he can hold up, see if we need to go get somebody else."

Elliott isn't the only young star looking for a new contract. Quarterback Dak Prescott, the 2016 NFL Offensive Rookie of the Year in the dynamic first-year pairing with Elliott, is arguably the biggest bargain in the league at the moment ($2 million base salary in 2019).

Receiver Amari Cooper, a midseason trade acquisition who provided a big boost to a sagging offense last season as the Cowboys surged to the division title in the second half and won a wild-card game, is in the final year of his contract.

Now it's time to see whether a star holding out will change things.

NOTES: The Cowboys will start camp with three defensive starters on the physically unable to perform list in defensive ends DeMarcus Lawrence (shoulder surgery) and Tyrone Crawford and cornerback Byron Jones. Crawford and Jones each had hip surgery. Stephen Jones said all are expected to be ready by Week 1. WR Noah Brown (knee surgery) also is on PUP.