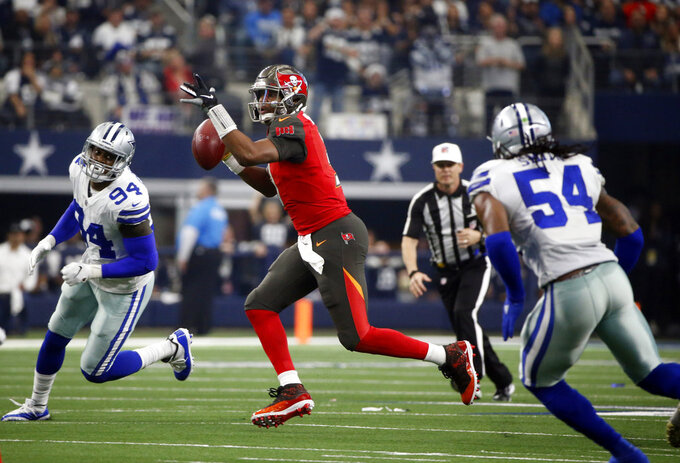 FILE - In this Dec. 23, 2018, file photo, Dallas Cowboys' Randy Gregory (94) and Jaylon Smith (54) pursue as Tampa Bay Buccaneers quarterback Jameis Winston (3) prepares to throw a pass during an NFL football game in Arlington, Texas. Both Cowboys were considered second-round gambles for vastly different reasons--Gregory because of a battle with substance abuse that eventually led to three suspensions, Smith because of a devastating left knee injury in his final college game. With the Cowboys headed to a divisional playoff at the Los Angeles Rams on a team with a defense-first mentality, Gregory and Smith are looking more like second-round payoffs all the time. (AP Photo/Michael Ainsworth, File)

FRISCO, Texas (AP) — Day after day a little more than two years ago, Randy Gregory and Jaylon Smith worked behind the scenes while the Dallas Cowboys practiced, the defensive end and linebacker hoping to prove they would be worth the wait.

Both were considered second-round gambles for vastly different reasons — Gregory because of a battle with substance abuse that eventually led to three suspensions, Smith because of a devastating left knee injury in his final college game.

With the Cowboys (11-6) headed to a divisional playoff game Saturday night at the Los Angeles Rams (13-3) on a team with a defense-first identity, Gregory and Smith are looking more like second-round payoffs.

"Y'all will never understand the hard work, the lonely nights ... the dark days that those guys had to face through their trials and tribulations," defensive end DeMarcus Lawrence said. "That's why it's so much passion in this locker room, mostly on the field when we play together. We feel like we all had our dark days."

For Gregory, the darkest days were in the months after his third suspension , a yearlong ban that also meant he couldn't be around the team. The first two times he was suspended — for the first 14 games of the 2016 season — he could still work out with the Cowboys. That's when the bond with Smith developed.

For Smith, it wouldn't be quite as accurate to say the days were dark because his bright outlook was one of the things that attracted the Cowboys to him during the draft process. The former Notre Dame standout couldn't run or jump at the combine, but he could flash a mesmerizing smile and talk hopefully about his future.

While Gregory missed the 2017 season, Smith finally got on the field — but with mixed results as he continued playing with a brace designed to compensate for nerve damage in his left foot.

This season, Gregory's suspension was lifted. And Smith's brace came off. Gregory, having missed 30 of 32 games over the previous two seasons, had six sacks after coming in with just one for his career. Smith took over as the play-calling leader in the middle of a top-10 defense.

"It's what makes us who we are," Smith said. "Everyone has been through something in their life. Everyone has that edge and drive. Once you identify it and find it, you have to use it as fuel."

Gregory, who has turned down most interview requests this season, was drafted late in the second round in 2015 out of Nebraska, sliding out of a projected spot high in the first round because of off-field concerns. He tested positive for marijuana at the combine.

After saying he wanted to make good on a promise to owner and general manager Jerry Jones to stay clean, Gregory made it through his rookie year without a suspension. He missed four games with an ankle injury and didn't have a sack.

Gregory's first sack came in the 2016 regular-season finale, just before the yearlong suspension was announced. He waited an extra six months to apply for reinstatement to improve his chances. Letters from teammates, including safety Jeff Heath, were part of the application.

The 26-year-old Gregory occasionally misses practice in the middle of the week for trips to NFL-mandated checkups, along with frequent drug testing.

"It's not one of those things where he got reinstated so now he could relax," Heath said. "He still has to work his butt off to be able to help us out on game days. Everybody loves him. That's one of the reasons why it was so easy to write that letter because it was just the truth."

Smith went early in the second round a year after Gregory, with the Cowboys all but certain he wouldn't play as a rookie because of the injury sustained in the Fiesta Bowl against Ohio State.

While there were concerns whether Smith would even play in the NFL, Dallas was confident because team physician Dr. Dan Cooper performed the surgery. And the Cowboys trusted their training staff to stick with the painstaking rehab.

Smith's return was celebrated as a major milestone, but his struggles left lingering doubts while the Cowboys missed the playoffs a year after an NFC-best 13 wins.

The 23-year-old's playmaking in his second season on the field has erased many of those doubts. Case in point: Smith's 69-yard fumble return for a touchdown in a win over Tampa Bay that clinched the NFC East for Dallas. By the way, Gregory caused the fumble with that sixth sack.

"Ultimately where those guys have come from and where they are now has everything to do with them, the drive, the determination they've had to have great careers," coach Jason Garrett said. "Both have different stories, but I think that's the underlying theme."

They aren't finished trying to prove their worth.