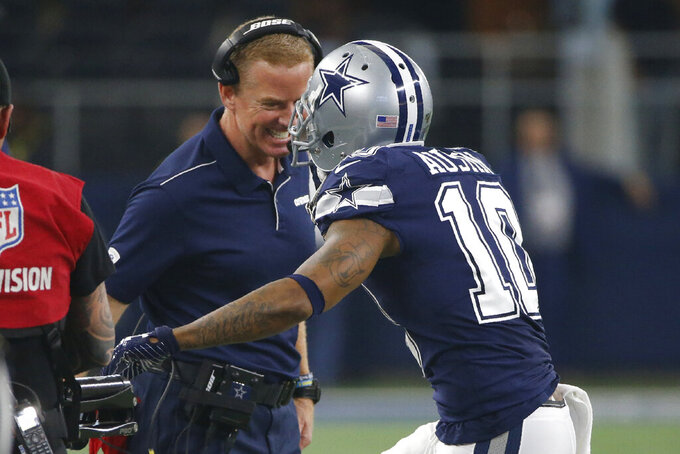 FRISCO, Texas (AP) — Dak Prescott threw deep and incomplete on a fairly short third down right after Ezekiel Elliott had run for 7 yards on Dallas' first possession against the Los Angeles Rams.

For a team trying to end its second three-game losing streak of the season amid questions of whether the Cowboys had lost their run-first identity, it wasn't the best way to start.

What a way to finish, though, and plant positive thoughts in their minds going into a game at Philadelphia that could put Dallas in the playoffs for the fourth time in six seasons.

The Cowboys rushed for a season-high 263 yards in a 44-21 win over the Rams and had two 100-yard rushers in the same game for the second time this season — a first for the franchise.

Elliott, the two-time rushing champion, ended a career-worst streak of five straight games without 100 yards with 117 while scoring twice. Rookie Tony Pollard, playing almost all the fourth quarter in a blowout, had a career-high 131 yards and a 44-yard touchdown to put Dallas in position to qualify for the playoffs with a win over the Eagles.

“I would have been pretty ambitious when we started this season to think we could go out here and play against the Rams the way that our running game did tonight,” owner Jerry Jones said. “That was extraordinary with our running game, but the way it was complemented with Dak.”

This was the formula when Prescott and Elliott were rookie sensations three years ago. Although Prescott won the 2016 NFL Offensive Rookie of the Year award, the offense was at its best when he played a secondary role to Elliott.

Dallas hasn't done that much this season, in part because of falling behind in several games. At one point, Prescott was leading the NFL in yards passing. Against the Rams, he only had to throw seven passes in the second half and finished with 212 yards.

“In a way,” Prescott said when asked if the team re-established its identity. “We were good to each other. We just picked each other up. That's what it's all about.”

Besides clearing the way for Elliott and Pollard, the offensive line didn't allow a sack of Prescott against Aaron Donald and company. In the previous two games, Prescott had gone down six times while the Rams had generated 11 sacks.

Prescott's communication skills on the coin toss. It's safe to say he'll be more careful the next time the Cowboys win the toss. He admitted to botching the wording when trying to say the Cowboys would defer. Referee Walt Anderson thought he said Dallas wanted to kick, which would have resulted in the Cowboys kicking off to start both halves. But Prescott also said “defer,” and the NFL intervened to make sure Dallas got the ball to start the second half.

The importance of Sean Lee is growing by the week, and he responded with the first game of his career with an interception and a sack. Once one of the NFL's most prolific linebackers with interceptions, the 33-year-old had his first pick in two years.

Through nine games, receiver Amari Cooper was averaging nearly six catches per game for 94 yards with seven touchdowns. In the past five games, he's at 3.6 catches and 45 yards per game with one TD. Cooper had one catch for 19 yards against the Rams, three games removed from his first outing without a catch for Dallas since the midseason trade last year.

Rookie LB Luke Gifford broke his arm against the Rams, but coach Jason Garrett said the club hasn't decided what to do about his roster spot. ... CB C.J. Goodwin was set for surgery for a broken thumb, but might be able to play. ... LB Joe Thomas injured a knee, and his status is up in the air.

1 — The highest number of catches for any Dallas receiver against the Rams. Cooper, Tavon Austin (59-yard touchdown), Michael Gallup and Randall Cobb had one apiece. The other 11 completions were to tight ends (Jason Witten with four, Blake Jarwin with two) and running backs (Elliott with three, Pollard with two). Witten had a 19-yard TD.

A victory over the Eagles will mean a second straight NFC East title and fourth in six seasons for Dallas.