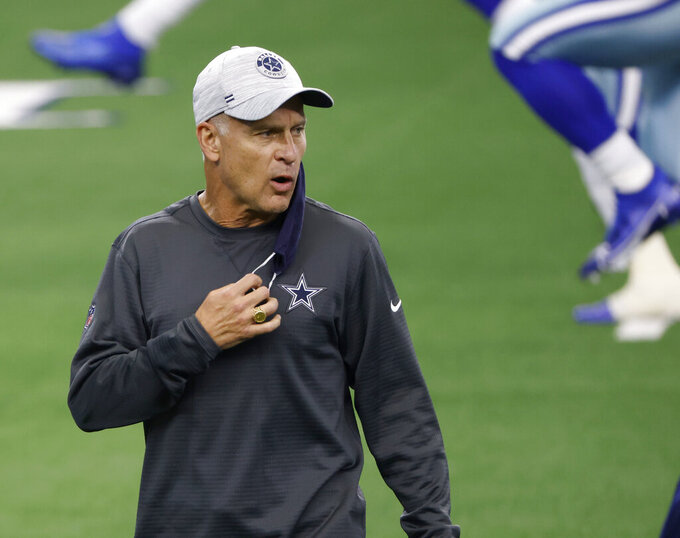 FILE - In this Oct. 11, 2020, file photo, Dallas Cowboys defensive coordinator Mike Nolan talks to players as they warm up for an NFL football game against the New York Giants in Arlington, Texas. The Cowboys have fired Nolan after their defense allowed a franchise record in points and finished 31st in the NFL against the run in his only season, the team announced Friday, Jan. 8, 2021. (AP Photo/Ron Jenkins, File)

FRISCO, Texas (AP) — The Dallas Cowboys fired defensive coordinator Mike Nolan on Friday after their defense allowed a franchise record in points and finished 31st in the NFL against the run in his only season.

Coach Mike McCarthy hired Nolan from New Orleans, where he was coaching linebackers, when McCarthy replaced Jason Garrett a year ago. They worked together for a season in San Francisco in 2005, when Nolan was coach and McCarthy was his offensive coordinator and the 49ers finished 4-12.

“I am appreciative of my relationships with both Mike and Jim,” McCarthy said. “These are never easy decisions to make.”

The Cowboys tried to implement a new scheme despite having no in-person time with players during the offseason because of the coronavirus pandemic. The start of the season reflected the limited training, with Dallas allowing at least 34 points in five consecutive games following a 20-17 loss to the Los Angeles Rams in the opener.

Dallas won twice despite the failures of the defense during that five-game stretch, beating Atlanta 40-39 and the New York Giants 37-34. Both games ended with field goals on the final play.

Dallas bottomed out at 3-9 with a 34-17 loss to Baltimore that almost became the second 300-yard rushing game against the Cowboys this season. The Cowboys gave up a franchise-record 307 yards on the ground in a 49-38 loss to Cleveland in Week 4.

Improved play by the defense during a three-game winning streak that kept Dallas in the NFC East race until the final weekend wasn't enough to save Nolan.

While owner Jerry Jones maintained all season that McCarthy would return despite a tough debut in Dallas, the quick departure of McCarthy's most important hire will be a mark against the former Green Bay coach.

After taking the job, McCarthy decided to keep the play-caller already in place in offensive coordinator Kellen Moore, who signed a contract extension just before the finale when he was in the running to take over at his alma mater, Boise State.

Nolan was a defensive coordinator for the first time since 2012-14 in Atlanta, a stint that ended with the Falcons last in the NFL in total defense and passing defense and close to the bottom in points allowed. In 2013, Atlanta was second-to-last in rushing defense.