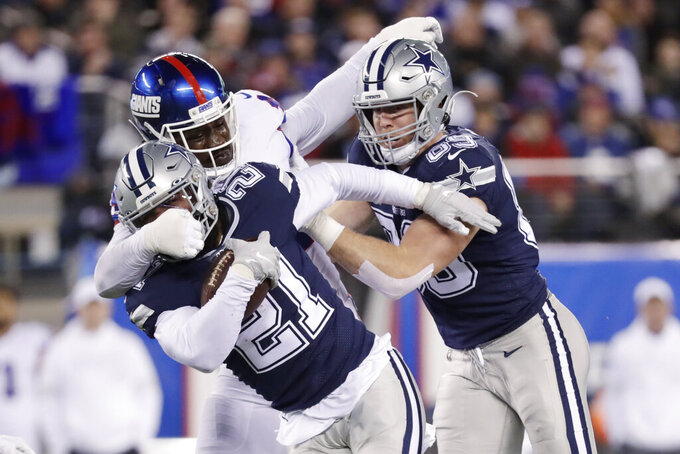 FRISCO, Texas (AP) — Several good things happened to Dak Prescott and the Dallas Cowboys after a black cat ran onto the field during a 37-18 victory over the New York Giants.

One of them was pretty lucky — a questionable pass interference penalty that kept a drive alive when Dallas was leading by five points early in the fourth quarter Monday night.

The call helped the NFC East-leading Cowboys (5-3) avoid another tight finish at the site of their most inexplicable loss this season, against another team they were expected to handle easily until a sluggish start made things difficult.

"We definitely have to fix that if we want to be a good team," running back Ezekiel Elliott said. "We did pick it up in the second half and finished really strong. But I'd like to see us go out there and take over that game early."

After a 24-22 loss to the New York Jets in the stadium the Jets share with the Giants, the Cowboys played their most complete game, a dismantling of Philadelphia, the only other threat in the division for the NFC East's defending champions.

But after the open week, Dallas returned to the place where the Jets won their only game so far this season and showed the inconsistency that marked a 3-3 start (three consecutive wins followed by three straight losses).

Prescott threw an interception on the first play from scrimmage after rookie Tony Pollard botched the fielding of the opening kick to pin Dallas deep. As soon as they took control with a TD early in the fourth quarter, the Cowboys gave up running back Saquon Barkley's 65-yard catch.

Dallas mitigated that mistake by forcing the Giants to settle for one of their four field goals. And only after the pass interference call that led to another touchdown drive were the Cowboys finally in control again.

The first half of the Dallas schedule was heavy on also-rans. The second half isn't.

"In a lot of ways, it shows the ability to handle adversity as a group, but at the same time, you don't have to start like that," tight end Jason Witten said. "You certainly have to get that cleaned up. There's still a lot of good things. But you're right, we can't do that as we move forward."

Statistically, Prescott has always been an afterthought in four seasons with Elliott, the two-time NFL rushing champion. It's been different under first-year offensive coordinator Kellen Moore. Prescott is in the top 10 in yards passing, touchdowns and completion percentage. After losing his first two games against the Giants, Prescott has won six straight. He has 16 TD passes and one interception in that span.

Kickoff coverage and returns. Pollard's quick mistake set a bad tone, and the former Memphis player hasn't had much impact in the part of the game that got him the most attention heading into the draft. On top of that, Giants return man Cody Latimer averaged 30 yards on six returns, taking two of them to roughly midfield.

Sean Lee had his best game in a long time with second-year linebacker Leighton Vander Esch missing the first game of his career because of a neck injury suffered in the game against the Eagles. According to the NFL, Lee tied Jaylon Smith for the team lead with 12 tackles. His lone tackle for loss dropped Barkley 7 yards behind the line the first time the Giants tried a screen pass after their young back took one 65 yards.

Receiver Randall Cobb had the second Dallas turnover on a fumble, contributing to the 12-3 deficit before the Cowboys scored 10 points in the final minute of the first half to take the lead for good. He also had a drop deep in New York territory the last time the Cowboys had to settle for a field goal and a 16-12 lead.

Receiver Amari Cooper returned after aggravating a knee injury suffered in practice during the week, catching a 45-yard touchdown. Safety Jeff Heath got 12 stitches for a cut near a knee.

7 — Takeaways for the Dallas defense in the past two games after getting just five through the first six. The Cowboys are tied for 12th in takeaways after being as low as 27th.

The first of two short weeks in November ends with a third straight prime-time game, at home against Minnesota on Sunday. The other short week is the traditional Thanksgiving game against Buffalo, which follows the only back-to-back road games, at Detroit and New England.