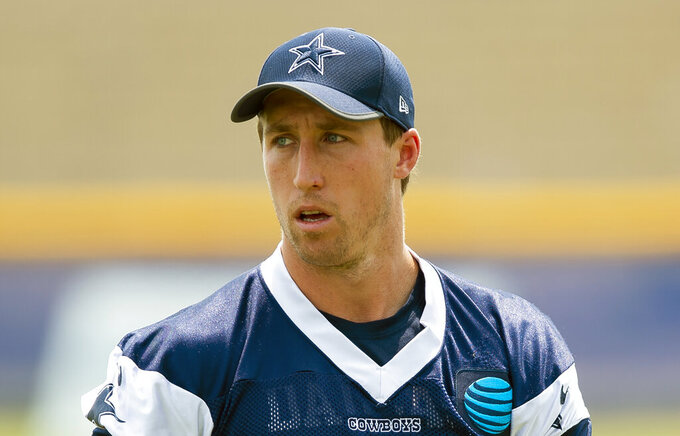 FILE - In this July 28, 2018, file photo, Dallas Cowboys linebacker Sean Lee walks on the field during NFL football training camp in Oxnard, Calif. Sean Lee retired Monday, April 26, 2021, after the linebacker spent all of his 11 mostly injury-plagued seasons with the Dallas Cowboys. The 34-year-old said in a letter released by the club that it was “my time to walk away.” (AP Photo/Gus Ruelas, File)

Sean Lee retired Monday after the linebacker spent all of his 11 mostly injury-plagued seasons with the Dallas Cowboys.

The 34-year-old said in a letter released by the club that it was “my time to walk away.” Lee is eighth in team history with 995 tackles.

A second-round pick out of Penn State in 2010, Lee led all NFL linebackers in interceptions through his first six seasons with 12, despite missing all of 2014 after tearing a knee ligament in the first offseason practice.

Lee is fourth among Dallas linebackers with 14 interceptions and holds the club record for tackles in a game with 22 against the New York Giants in 2016, his only All-Pro season.

Injuries ending up defining Lee's career. He missed the final 10 games of 2012 with a toe injury and five of the final six games the next year with hamstring and neck issues before the season-ending knee injury in the 2014 offseason.

The only years in which Lee didn't miss at least one game with injuries were 2016, when the two-time Pro Bowler helped the Cowboys reach the divisional round of the playoffs, and 2019. Hamstring injuries sidelined Lee frequently later in his career.

By his final season, Lee had a secondary role behind the young leaders of the linebacking group, Leighton Vander Esch and Jaylon Smith. The Cowboys went 6-10 in coach Mike McCarthy's first season, missing the playoffs for the third time in four years.

“Whenever I’m near a field, the smell brings me back to when I first started playing, pulling on a helmet, trying on those shoulder pads, that perfect tackle,” Lee wrote. “To think of the journey now, experiencing things I never thought possible with the men and women who make this game what it is, I’m beyond grateful.”

Medical concerns hurt Lee's stock in the draft after he tore a ligament in his right knee at Penn State. After the 2014 injury with the Cowboys, Lee said doctors had told him after the injury in college that his left knee was at risk of a similar issue.

Lee finished with more than 100 tackles six times, topped by 174 in 2016. He was healthy all year for the NFC East champions that season, but sat the final game of the regular season with Dallas' playoff scenario all but set.