Cowboys look to build off character-check win over Falcons 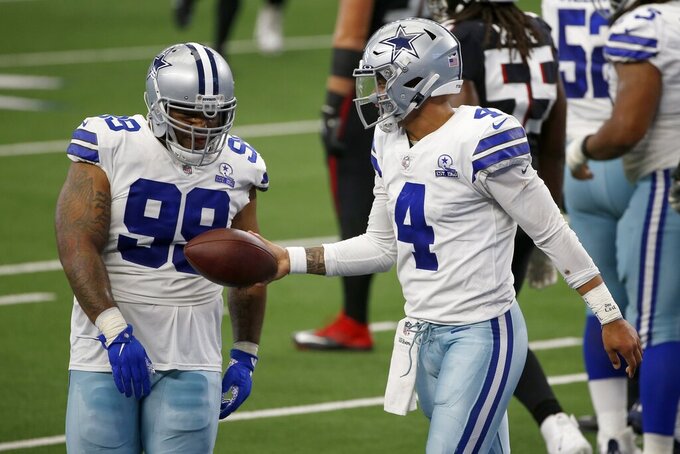 Dallas Cowboys' Antwaun Woods (99) is handed the ball by quarterback Dak Prescott (4) after Prescott scored a touchdown in the second half of an NFL football game against the Atlanta Falcons in Arlington, Texas, Sunday, Sept. 20, 2020. (AP Photo/Ron Jenkins)

ARLINGTON, Texas (AP) — Dak Prescott said Mike McCarthy’s halftime message was that the outcome mattered less than the character check after an inept first quarter put the Dallas Cowboys way behind in their coach’s home debut.

The star quarterback’s record-setting response in the second half led to an improbable 40-39 win over Atlanta on Sunday.

The wild rally keyed by a successful onside kick raised the obvious question of what kind of catalyst this could be for a franchise that doesn’t want to wait for McCarthy and his new players to get comfortable with each other before contending for championships.

“To show the resiliency to go out there and continue to fight and come out with the win, it does so much,” said Prescott, who became the first player in NFL history with at least 400 yards passing and three rushing touchdowns in the same game.

“Obviously, way better than starting 0-2, but going 1-1, and having a lot of confidence after we put ourselves in such a big hole. We just stayed at it, and everybody believes in each other. That was huge in so many ways.”

The Cowboys fumbled four times, losing three, and botched a fake punt while falling behind 20-0 in the first quarter. They still trailed by 15 with less eight minutes to go.

But after Prescott’s third rushing TD pulled them within two in the final two minutes, kicker Greg Zuerlein’s spinning onside kick, executed without a tee, wiped out a game’s worth of miscues and misfires, in part because Atlanta erred by not falling on the ball before it went 10 yards. Zuerlein kicked a 46-yard field goal as time expired.

“We weren’t supposed to win that game,” said running back Ezekiel Elliott, who was solid again with 89 yards rushing and a touchdown but is still looking for his first 100-yard game as the Cowboys prepare to visit Seattle on Sunday.

They did win, and McCarthy avoided matching the only other 0-2 start of his career — his first season with Green Bay in 2006, four years before he won the Super Bowl with the Packers on the Cowboys’ home field.

“You look at past experiences and look at any great season, you have big moments that you’re able to build off of,” McCarthy said. “This is a big moment to build off of, but the fact of the matter is that we’re 1-1. We understand that.”

Prescott made a poor decision to shovel the ball to tight end Dalton Schultz when he was going down, resulting in one of the two fumbles that led to Atlanta touchdowns. The two-time Pro Bowler was unflappable after that, going 34 of 47 for 450 yards and a touchdown to Schultz for a passer rating of 109.4. The rushing TDs totaled 4 yards combined.

Although the contracts are mostly bargains, the Cowboys focused heavily on the pass rush in the offseason. They have just two sacks through two games, and there were plenty of plays when time led to completions for Matt Ryan.

Schultz had career highs with nine catches and 88 yards along with his first career TD. That showing came a week after the Cowboys lost starting tight end Blake Jarwin to a season-ending knee injury.

Elliott’s ball security. He fumbled twice for the second time in his career. The other was Week 2 of his rookie year at Washington. The two-time rushing champion was benched in that game. Not this time, and he responded by flattening safety Damontae Kazee at the goal line on his 1-yard scoring run. The Cowboys won both games, too.

Prescott left for two plays for a concussion check with the Cowboys on the Atlanta 1-yard line after taking a hit when Deion Jones was called for roughing the passer in the third quarter. Andy Dalton threw an incompletion, and Elliott’s apparent TD run was overturned on review. That gave Prescott time to come back and run a QB sneak for his second rushing TD. ... DE DeMarcus Lawrence didn't play in the second half after injuring a knee before halftime.

0 — Before the victory over Atlanta, that was the number of times the Cowboys had won when allowing at least 20 points in the first quarter while going scoreless themselves. It hasn’t happened in the NFL in almost nine years.

The pandemic-limited crowd of 21,708 — 27% of capacity at 80,000-seat AT&T Stadium — was noticeable a few times. One was when fans booed the team off the field with Atlanta leading 29-10 at halftime. Another was when C.J. Goodwin pounced on the onside kick, and when Zuerlein’s winning kick went through.

The Cowboys will be underdogs in Seattle, where fans aren’t allowed. Then they will get the home crowd for three straight games, a stretch that might be looked back on as the most important of the season when it’s over.