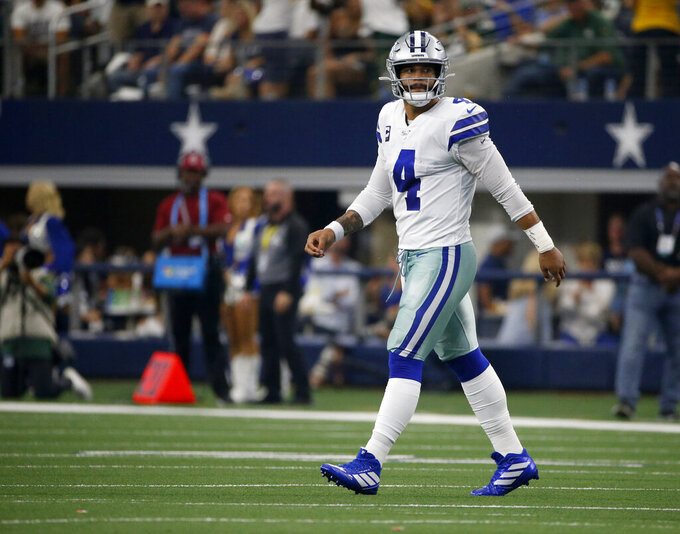 Now that the 2016 NFL Offensive Rookie of the Year has six picks through five games in his fourth season, Prescott is also quick to dismiss any correlation between the frequency of turnovers and any tendency to take more risks down the field.

While he built his reputation on protecting the ball, Prescott isn't getting cautious coming off three interceptions to tie his career high in a second straight loss. The Cowboys (3-2) will try to stop that skid Sunday at the New York Jets (0-4).

The first interception in a 34-24 loss to Green Bay last weekend should have been caught for a big gain by No. 1 receiver Amari Cooper, who might have scored had he made the grab.

Prescott acknowledged the second pick was risky, when Packers cornerback Chandon Sullivan made a leaping grab with Prescott trying to drop the throw between layers of the defense. The QB thought he would draw a pass interference penalty on the third interception.

While the four-game streak with at least one interception is twice as long as any previous run for Prescott, it's worth noting that the only interception in the third straight game — a 12-10 loss to New Orleans — was a desperation pass on the final play.

"If you look at the specific plays, that is how you have to evaluate it," coach Jason Garrett said. "He has been an outstanding decision-maker since he has been our quarterback. We anticipate him being able to continue to do that."

Still, the two-time Pro Bowler's reputation as a winner — second to New England star Tom Brady in regular-season victories since entering the league — has a lot to do with avoiding mistakes.

Prescott had 23 touchdowns with those four interceptions as a rookie and jumped to 13 picks with 22 TDs in his second season, when running back and fellow first-year sensation Ezekiel Elliott was suspended for six games and Dallas missed the playoffs.

The interceptions were back down to eight with 22 more touchdowns last season, when Prescott was sacked the second-most times in the NFL.

This year, Prescott is completing 70 percent of his passes with 11 touchdowns and a 106 passer rating. Both would be career highs for a full season. But he'd also like to see his next 25 games be something like his first 25, when Prescott threw interceptions in just six of them.

Tight end Jason Witten, in his 16th season after spending a year in retirement as a broadcaster, believes the Dallas offense is more vertically oriented under first-year offensive coordinator Kellen Moore than before he left two seasons ago.

"I wouldn't say he is seeing things he didn't see before," Witten said. "I would say we are aggressively attacking as an offense. Everybody wants to be a vertical attacking offense. Easier said than done. I think we have done that. That was the plan coming into this season."

When the offense was rolling up nearly 500 yards and more than 30 points per game during a 3-0 start, Prescott acknowledged a surge of confidence that led him to unleashing some throws he might have held in previous years. His second interception, against the winless Dolphins in Week 3, was such a throw.

Prescott said a surge in interceptions isn't changing that mindset.

Prescott is trying to reverse that momentum right now.