Cowboys' Prescott takes next step since injury as camp opens 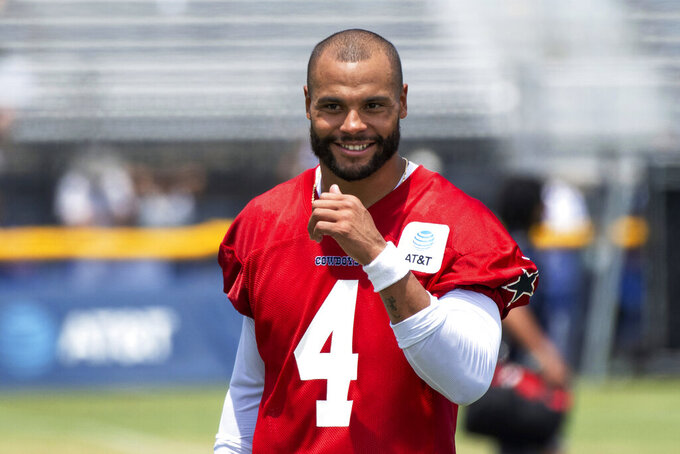 Dak Prescott bowed his head and slowed his walk before pointing to the sky and breaking into a trot while taking the field for the first practice of training camp.

The star quarterback of the Dallas Cowboys savored the latest milestone in his return from the horrific ankle injury that ended his 2020 season, which didn't start with the usual camp in California because COVID-19 kept teams at home.

Prescott also mentioned the peek toward the heavens, which he has always done after touchdowns to honor his late mother, who died of cancer, and now has another reason after his brother Jace died by suicide early in the pandemic.

“The walk onto the field, then before I actually crossed the line, that’s something I did well before the injury,” Prescott said Friday, a day after the opening camp practice. "So now, it’s been a long time since I’ve been out there. It’s been a while since we’ve been in Oxnard.

“That was a special moment just to think about where I was, think about all the hard work and support and everything that went into me being back out there and being able to do what I love again.”

While the Cowboys won't put on pads until the middle of next week, Prescott opened camp Thursday with his first 11-on-11 work since the injury.

Not that there was any doubt, but coach Mike McCarthy said Prescott will play in preseason games, another part of 2020 that was scrubbed because of the coronavirus pandemic.

Prescott didn't try to hide his excitement about the Sept. 9 opener at Super Bowl winner Tampa Bay and seven-time champ Tom Brady, not even bothering to remind reporters of the plentiful camp practices and exhibition games before then.

“I watched him closely in the team work live yesterday by design,” McCarthy said. “He didn’t flinch. It looked like he never left. When he plays in a preseason game, that will be the second threshold. And I’m sure he’ll be as excited as anybody when we kick it off in Tampa.”

The Cowboys were already without starting tackles Tyron Smith (neck) and La'el Collins (hip) for the season when Prescott went down with a compound fracture and dislocation of his right ankle in Week 5.

Dallas lost the first four games without Prescott on the way to a 6-10 record in McCarthy's debut. Four-time All-Pro right guard Zack Martin eventually joined Smith and Collins on the sidelines with a calf injury.

Because of so many high-profile, long-term losses to injury, it was almost an afterthought that tight end Blake Jarwin didn't play after the opener because of a torn knee ligament.

It almost feels like a reunion for Prescott with all five practicing again, although they stayed pretty familiar with each other with all the rehab time over the past nine months.

“When that group is in the huddle, I pretty much say every time, ‘The band is back together,’” Prescott said. “Me and Tyron talked about it as we were approaching that first team session yesterday, ‘It’s been a long time, huh?’”

The last time the Cowboys were in California two years ago, Prescott's contract was the talk of camp. He was going into the final year of a rookie deal that had turned into one of the best bargains in the NFL because the former Mississippi State standout was a fourth-round pick who won 2016 NFL Offensive Rookie of the Year and had already made two Pro Bowls.

Talks went nowhere then and weren't much better last year, when Prescott played on a $31.4 million franchise tag. The injury raised questions about the elusive long-term deal, but not for Jerry Jones.

The owner and general manager proved it by signing Prescott to the richest contract in the history of the storied franchise in March. The $160 million, four-year deal is second to Kansas City star Patrick Mahomes in average annual value.

So questions about contracts have been replaced this year by questions about injury recovery, vaccinations, and keeping the team focused with HBO's “Hard Knocks” cameras around every corner.

“I think and I know this team is going to get to the numbers,” Prescott said, referring to the 85% threshold the league is expected to adopt for easing COVID-19 restrictions. “This team is going to do what we have to do to make sure we’re continually progressing through this thing the right way.”

Two days after McCarthy said he “almost wrecked my truck,” when Jones called to tell him “Hard Knocks” personnel would be behind the scenes for camp, Prescott said players came out of the initial team meetings with the right mindset.

With the injury and the big contract behind him, there's no question whose voice resonates the most with this franchise — and probably will for years.

“A hell of a leader,” said running back Ezekiel Elliott, Prescott's backfield mate since they were rookies starting the opener in 2016. “So blessed to play with him, and ain’t no other quarterback I’d want to go to war with.”