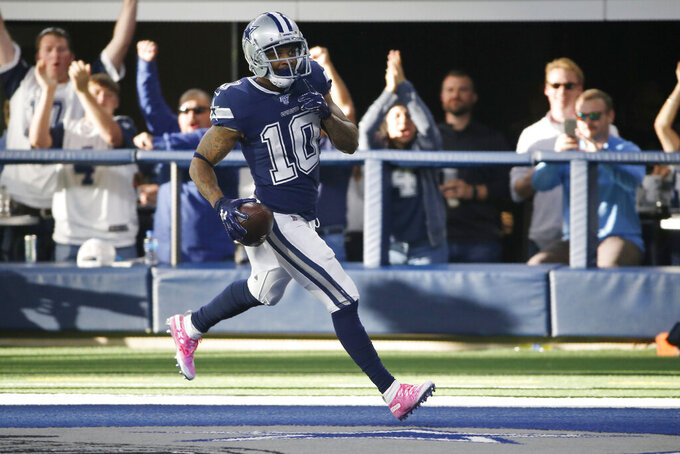 ARLINGTON, Texas (AP) — Dak Prescott and the Dallas Cowboys turned “much ado about nothing” over the coin toss into “win and they're in” next weekend.

Prescott threw two touchdown passes after his confusing exchange with referee Walt Anderson made many think the Cowboys forced themselves to kick off to start both halves, and Ezekiel Elliott ran for two scores in a 44-21 victory over the Los Angeles Rams on Sunday.

The Cowboys (7-7) ended their second three-game losing streak of the season, and the defending NFC East champions stayed even with Philadelphia atop the division with a showdown looming next Sunday.

After their first victory over a team with a winning record this season, the Cowboys can clinch their fourth division title in six seasons with a win at the Eagles.

“We know that the team’s been criticized for not having really substantive victories by sometime the record of the teams we’ve played,” owner Jerry Jones said. “That is the kind of win you want to have before you get ready to go play what is the biggest game we play this year.”

The defending NFC champion Rams (8-6), who already needed help to get into the playoffs, didn't help themselves with another poor showing a week after their most impressive game of the season in a win over Seattle.

“We haven't been consistent as a football team really throughout this season,” coach Sean McVay said. “That's a big part of my responsibility is to figure out solutions and help us be more consistent.”

After rushing for a franchise playoff-record 273 yards in a 30-22 divisional win over the Cowboys last January, the Rams were held to just 22 while Dallas churned out a season-high 263. Todd Gurley had 11 carries for 20 yards.

Coming off two of his better games of the season, Rams quarterback Jared Goff had a rough outing that looked better at the end because of his fourth-quarter numbers with the outcome decided. He finished 33 of 51 for 284 yards with two touchdowns and an interception.

The Cowboys' No. 1-ranked offense kept rolling with a season high in points to go with 475 yards, including scoring drives of 90 and 97 yards.

Linebacker Sean Lee, who didn't practice all week while dealing with pectoral and thigh injuries, returned his first interception in two years to the LA 9-yard line in the final two minutes of the first half.

Lee's 14th career interception set up Elliott's second TD in the final two minutes of the first half, a 3-yarder for a 28-7 halftime lead.

Those two TDs essentially made the coin toss question moot, but the Twitter storm had long since raged.

After the Cowboys won the toss, and Prescott initially made a reference to kicking off before saying the Cowboys would defer. Anderson said a couple of times the Cowboys wanted to kick, creating the confusion.

“Definitely a weird start,” Prescott said. “Just bad use of words by me. We listened to the audio. We got it figured out. Just wasn’t the cleanest coin flip I’ve been a part of.”

But what did he say.

“A little bit of everything,” Prescott said as reporters broke out in laughter.

NFL officiating chief Al Riveron told a pool reporter the league had audio of Prescott saying “three different things, and then we hear at the end where they say ‘defer.’” Riveron said he intended to talk to Anderson at halftime to clear up any confusion.

The Rams went all the way to the start of the second half thinking they were going to get the ball before finding out Dallas would receive.

“I don't know how or why or what happened, but we had talked to the referees the whole game,” Goff said. “I don't think that would have changed much with the outcome of the game, but it's something a little weird definitely.”

The Cowboys were easy fodder for critics with questions swirling about the future of coach Jason Garrett in the final year of his contract, leading an underachieving team that had lost seven of 10 games since a 3-0 start.

Elliott ended a career-worst streak of five games without a 100-yard game, the two-time rushing champion finishing with 117 yards with just one carry in the fourth quarter. Rookie Tony Pollard played most of the fourth and had a career-high 131 yards, including a 44-yard score.

“How many rushing yards did we have today? Like 300? Close to it?” Elliott asked. “Yeah, I mean we ran the ball really well today. The O-line, I don't know what they ate for breakfast, but they did a hell of a job and made it easy on us.”

Prescott didn't have to throw much after going 9 of 16 for 160 yards in the first half, ending up 15 of 23 for 212 yards. Jason Witten made a one-handed catch on a 19-yard score that put the 16th-year tight end within one receiving TD of Dez Bryant's club record of 73.

After the Rams pulled even on Goff's 2-yard toss to Gurley, Prescott escaped pressure and found Tavon Austin all alone at the LA 35. Austin jogged across the goal line from there.

After getting outgained on the ground by 223 yards in last season's playoff loss, the Cowboys finished with a 241-yard edge. It was the third game with at least 200 yards rushing for Dallas this season, but the first since Week 3.

Kai Forbath made all three of his field goals, from 50, 42 and 42 yards, and all five of his extra points in his Dallas debut after the Cowboys cut Brett Maher following three critical misses in a span of two games. Maher was just 1 of 5 from 40-49 yards.

The Cowboys, already down Leighton Vander Esch because of a neck injury, lost two more linebackers in the first half in veteran Joe Thomas and rookie Luke Gifford. Thomas injured a knee, and Gifford was knocked out by an arm injury.

Rams: at San Francisco on Saturday.

Cowboys: Can clinch a second straight NFC East title and fourth in six seasons with a win over the Eagles.