Cowboys settle for progress in near-upset of 8-0 Steelers 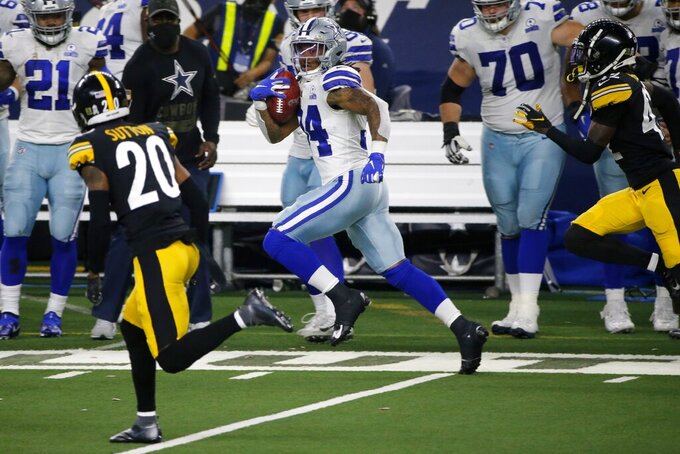 Pittsburgh Steelers' Cameron Sutton (20) and James Pierre (42) give chase as Dallas Cowboys running back Rico Dowdle returns a punt for a long gain in the second half of an NFL football game in Arlington, Texas, Sunday, Nov. 8, 2020. (AP Photo/Michael Ainsworth)

ARLINGTON, Texas (AP) — Garrett Gilbert breathed some life into an offense that needed it and had the Dallas Cowboys 23 yards from a big upset in his first career start six years after the quarterback was drafted.

The Cowboys had to settle for progress in a season that's just about lost, falling 24-19 to the unbeaten Pittsburgh Steelers on Sunday when Dallas was the biggest underdog it has been at home in at least 31 years.

“We deserved a chance to win that game,” Gilbert said. “Obviously, we gave ourselves that chance. It's just tough when all of us together put everything into that thing and then come up short.”

Gilbert was the fourth different starter in a five-game span for the Cowboys since star Dak Prescott's season-ending ankle injury. Dallas (2-7) has lost all four games without Prescott, dropping into a tie for last in the woeful NFC East with the New York Giants.

A former Texas quarterback who finished his career at nearby SMU, Gilbert got the nod over Cooper Rush, who was Prescott's backup for most of three seasons and was re-signed after new backup Andy Dalton got a concussion.

Rookie Ben DiNucci made his first career start last week against the Eagles, but first-year coach Mike McCarthy chose the experience of just being in the league over another start for the seventh-round pick, who returned to the inactive list.

The decision looked like a good one, with Gilbert comfortably directing the offense and avoiding big mistakes outside of an interception with a chance to extend a lead. It was only partially his fault because he was hit just as he was throwing.

Dallas' last good chance appeared to end when Gilbert was sacked on fourth down deep in Dallas territory, but the Cowboys got another shot after Pittsburgh coach Mike Tomlin went for it on fourth-and-1 rather than kick a short field goal with about a minute remaining.

The Cowboys got the stop, and Gilbert moved them 52 yards to the Pittsburgh 23 in about a minute for a final play. His pass to the end zone was short and knocked away by Minkah Fitzpatrick near the goal line.

“Today’s a reflection of what we’re capable of doing,” McCarthy said. “I think the understanding of how we’re playing and how we want things done, you can see it building throughout the preparation phase.”

Gilbert's first career TD pass — a 20-yarder to rookie CeeDee Lamb — ended a two-game stretch without reaching the end zone for an offense that was No. 1 in the NFL with Prescott. But that was the only TD, and the offense squandered two more good chances provided by special teams.

C.J. Goodwin took an across-the-field lateral on a punt down the right sideline 83 yards, but some of that was erased by an illegal blocking penalty. Dallas had to settle for one of Greg Zuerlein's four field goals.

With Pittsburgh kicking off from the 50 after a field goal, rookie Rico Dowdle's 64-yard return gave the Cowboys another short field. Leading 19-15 from the Pittsburgh 5, Gilbert was hit by Cam Heyward as he threw and Fitzpatrick intercepted the fluttering pass in the end zone.

With just six passes for his career coming in, Gilbert finished 21 of 38 for 243 yards. Dalton was unavailable because he's on the COVID-19 list, but he's expected to be available after the open week. Dallas is at Minnesota in two weeks.

“I thought Garrett kept us in good plays,” McCarthy said. “There was a lot going on at the line of scrimmage. He was prepared. You could see it during the course of the week he was getting more and more comfortable as he had the opportunity to exercise the game plan.”

The Cowboys came in with the NFL's worst rushing defense, but held the Steelers to a season-low 46 yards.

Ezekiel Elliott played after being limited in practice all week by a hamstring injury that he had to test on the field before the game. The two-time rushing champion finished with 51 yards on 18 carries, while Tony Pollard had 57 yards on nine carries.