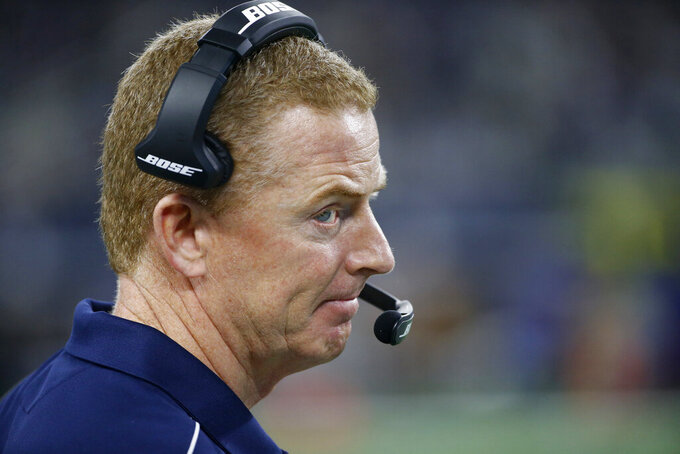 Dallas Cowboys coach Jason Garrett stands on the sideline watching play against the Minnesota Vikings during the first half of an NFL football game in Arlington, Texas, Sunday, Nov. 10, 2019. (AP Photo/Ron Jenkins) 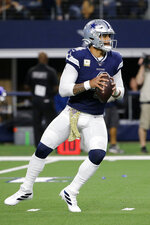 ARLINGTON, Texas (AP) — The Dallas Cowboys are staring at the same old playoff path, the one that has contributed to a franchise with five championships going nearly 25 years without reaching the Super Bowl.

A 28-24 loss to Minnesota in a matchup of NFC contenders left Dak Prescott, Ezekiel Elliott and company with losses to three of the four teams in the best position to secure the pair of first-round byes in the postseason.

Perhaps more importantly, a team that started the season with lofty expectations and three straight victories is now 5-4 and likely resigned to playing on the road, if it can repeat last season's formula of winning a wild-card game as NFC East champion.

The Cowboys haven't won a road playoff game in 26 years, dropping eight straight. They are tied with Philadelphia for the division lead, with a win over the Eagles. Dallas visits Detroit (3-5-1) on Sunday.

"I think we're still day-to-day," linebacker Sean Lee said. "There's still a lot ahead of us, and we need to start winning games like this against good football teams."

Dallas' wins are against teams with a combined record of 10-27, the losses to teams that are 24-14. The defeats include an inexplicable one at the Jets when they were winless. New York is 2-7 now.

"We're a confident team," Prescott said. "We're not going to let anybody outside of that locker room get in between us. We still control our own destiny. As long as we can do that, we can't ask for anything more."

Prescott nearly had 400 yards passing in a loss for the second time this season, finishing with 397 yards and three touchdowns while his only interception was on a desperation heave into the end zone on the final play.

The 2016 NFL Offensive Rookie of the Year entered Monday second to Philip Rivers of the Los Angeles Chargers in yards passing with 2,777, tied for third in TD passes with 18 and seventh in completion percentage (68.3).

First-year offensive coordinator Kellen Moore will have to answer for the play-calling with a second-and-2 at the Minnesota 11-yard line in the final two minutes when a touchdown would have given the Cowboys the lead.

On a night when Prescott and several of his receivers were hot while the two-time rushing champion Elliott was held to a 2.4-yard average (20 carries for 47 yards), Elliott got the ball on consecutive running plays. The first was stopped for no gain, the second for minus-3 yards. Dallas tried him again on a passing play on fourth-and-5. It was broken up.

"I'm not going to question the play-calling," Prescott said. "There were opportunities. We just have to do a better job at executing those plays."

Amari Cooper has had bigger games statistically since joining the Cowboys in a midseason trade for a first-round pick last year. None were more impressive than this 11-catch, 147-yard performance.

He had three brilliant receptions, including toe-tappers on the sideline on consecutive plays. The second was a 12-yard touchdown that gave Dallas its only lead. "I will use that word in a loss: brilliant," owner Jerry Jones said.

The screen game is often a reflection of the linebacking play, and running back Dalvin Cook had catches of 27 and 29 yards to set up Minnesota's first two touchdowns. Cook tied his career high with 86 yards receiving.

LG Connor Williams was set for arthroscopic knee surgery Tuesday and will miss time, but coach Jason Garrett is optimistic Williams can return. Xavier Su'a-Filo is likely to start in his place. RG Zack Martin played through an elbow injury. S Jeff Heath was limited to special teams play because of injuries to both shoulders. RT La'el Collins is dealing with a recurrence of a back issue.

103 — The difference in rushing yards between Minnesota (153) and Dallas (50). The Vikings were right on their average with the NFL's No. 3 rushing attack coming in. The Cowboys fell almost 100 yards short of their fourth-best average.

The Cowboys don't have consecutive home games for the first time in franchise history. The only set of back-to-back road games is coming, with a trip to New England after Detroit.

Fans will be tempted to look ahead to the Patriots, but the Cowboys might be putting their season back on the brink with a loss to the Lions, particularly if Detroit quarterback Matthew Stafford is still sidelined by hip and back issues.