Cowboys stuff Seahawks' run in wild-card win; it's pass next 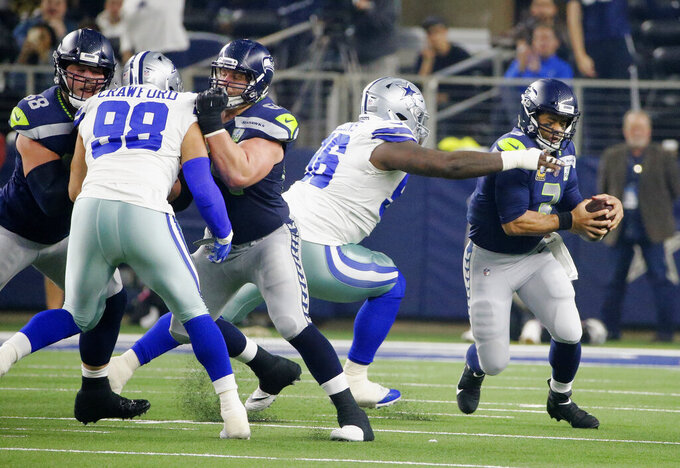 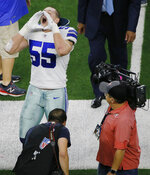 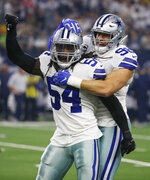 ARLINGTON, Texas (AP) — The young Dallas defense stuffed the NFL's No. 1 rushing offense in a wild-card win over the Seattle Seahawks.

Now it's time for the Cowboys to take on either the league's all-time leader in yards passing in Drew Brees of New Orleans, or this year's fifth-best passing offense in Jared Goff and the Los Angeles Rams. The divisional round game will be next weekend.

A group now led by playmaking linebackers Leighton Vander Esch and Jaylon Smith, rather than 2016 All-Pro Sean Lee, has been up to the challenge all season. And that included a 13-10 win over Brees that ended the Saints' 10-game winning streak.

"We've got to take the same mindset next week ... and not get too far ahead of ourselves," Vander Esch said. "We can be confident, but there's a difference between being confident and being overly, maybe I should say cocky, if you want to use that word. We do a pretty good job of bringing ourselves back down."

In a 24-22 win that ended what the Elias Sports Bureau said was the Seahawks' record streak of nine straight victories in playoff openers, the Cowboys held Seattle nearly 100 yards below its league-leading average of 160 yards Saturday night.

Chris Carson, who had his first career 100-yard game in a Week 3 win over Dallas that turned Seattle's season, was limited to a season-low 20 yards on 13 carries. The Seahawks finished with 73 yards rushing, and quarterback Russell Wilson's legs weren't the factor they often are.

"We take great pride in stopping the run, too," coach Jason Garrett said. "It's about discipline. It's about winning your gap. It's about setting the edge. It's about tackling. But it's also about physical and mental toughness. That's a really important part of our football team."

The Cowboys believe that applies to defending the pass as well. Although they sacked Brees just twice, there were five quarterback hits in one of his worst games of the season. Dallas has been a top-10 defense most of the season.

"The confidence is there, but it's all about being patient and executing," said defensive end DeMarcus Lawrence, who led the team in sacks for the second straight year with 10½ and made his second consecutive Pro Bowl. "It doesn't matter about your confidence."

The Seahawks won six of their last seven in the regular season to reach the playoffs a year after missing for the only time in Wilson's seven seasons. They overhauled the defense and lost one of the mainstays they decided to keep in disgruntled safety Earl Thomas, who broke his leg in Week 4. And they found Wilson a running game without a big name such as Marshawn Lynch.

"Nobody thought we were going to be here, so we're miles ahead of where expectations were," said coach Pete Carroll, who got a three-year extension through 2021 late in the regular season. "This doesn't mean anything to me because that's not my expectations."

Dallas passing game coordinator and defensive backs coach Kris Richard, who took over play-calling duties from defensive coordinator Rod Marinelli this season, is expected to have a busy Sunday.

Owner and general manager Jerry Jones said Miami owner Stephen Ross was one of his guests during the game, and that Ross would interview Richard for the team's vacant head coaching position before the former Seattle defensive coordinator starts preparations for the divisional round. The Jets are also expected to interview Richard, who was fired by the Seahawks after last season and hired by Dallas.

"There are no secrets in the NFL when it comes to people that can help you win football games," Jones said. "And he's a winner."

Sebastian Janikowski didn't play after injuring his hamstring while missing a 57-yard field goal try on the final play of the first half. The 40-year-old isn't under contract for next season, and Carroll figured he simply hurt himself trying to kick the ball as hard as he could.

The question is whether Seattle, or any other team, will want to take the risk after the Seahawks were left with no good options for an onside kick down two points with 1:18 left. Michael Dickson's drop-kick went too far and was an easy game-sealing catch for Dallas receiver Cole Beasley. Plus, it was the second time in the last three weeks of the season that Seattle had an injury issue with Janikowski.

NFL rushing champion Ezekiel Elliott was the only skill position player to sit out Dallas' 36-35 win over the New York Giants in the regular-season finale with the Cowboys already locked in as the NFC's fourth seed. He was busy again in his return, with 26 carries for 137 yards and four catches for 32 yards. It was his fourth game of at least 30 touches this season. Expect a heavy load again in a week. "I'm glad I took the week off," he said. "We have bigger things."