Cowboys try many tricks with rookie QB, fall to Eagles 23-9 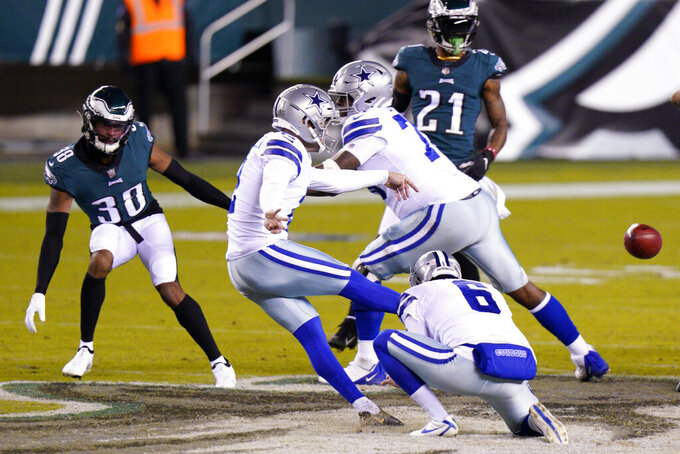 Dallas Cowboys' Greg Zuerlein (2) kicks a field goal during the first half of an NFL football game against the Philadelphia Eagles, Sunday, Nov. 1, 2020, in Philadelphia. (AP Photo/Chris Szagola)

The Dallas Cowboys tried to fake their way through rookie quarterback Ben DiNucci's first — and they're thinking only — start.

Ultimately, Dallas had run out of gadget plays down six while driving in the fourth quarter, and DiNucci's fumble on a safety blitz was returned 53 yards for a touchdown by Rodney McLeod to seal the Eagles' 23-9 victory Sunday night.

“That’s why you game plan, just the opportunity to have some deception,” coach Mike McCarthy said. “You’re always challenging the defense as far as play with good vision and testing their eyes ... just changing some things up.”

The Cowboys (2-6) started a third quarterback in the same year for the first time since 2015. This was a much more unconventional look than when Dallas was trying to save a season wrecked by Tony Romo's collarbone injury.

DiNucci drew the start in his home state of Pennsylvania after Andy Dalton couldn't play a week after getting a concussion at Washington. That was Dalton's second start in place of star Dak Prescott, out for the season with a broken ankle.

Owner Jerry Jones said on his radio show this past week the club expected Dalton, a nine-year starter in Cincinnati before signing to be Prescott's backup, to return next Sunday at home against Pittsburgh. In the meantime, the Cowboys tried to give DiNucci as much help as they could.

The seventh-round pick from James Madison needed it, finishing 21 of 40 for 180 yards, losing two fumbles and getting sacked four times.

“We had a few different tricks that were specific to this week,” DiNucci said. “Ran a few of them. Felt confident, felt comfortable running the offense. They did a good job. We had expected them to play man coverage all week. Their kind of M.O. early was to junk it up and play some zone and disguise things to try to get me to think it was man.”

A reverse to rookie receiver CeeDee Lamb picked up 19 yards on the game's first possession, which ended with the first of Greg Zuerlein's three field goals and a 3-0 lead.

Elliott ran several times with a direct snap, and Wilson — who actually is a former quarterback and has as many touchdown passes this season as Dalton (one) — took a direct snap before handing off to Elliott.

Most of the fancy plays didn't do much, including when DiNucci threw backward to Wilson with the clear intention for the receiver to throw. Seeing nothing open, Wilson kept and was tackled for a 1-yard loss.

The Cowboys kept trying, and probably too long. Leading 9-7 in the third quarter and driving at Philadelphia 26 after seven straight running plays with Elliott and Tony Pollard gained 43 yards, Wilson was dropped for a 10-yard loss on a reverse. Two plays later, Zuerlein missed a 52-yard attempt.

“When you have a drive and you’re running the ball that good and you do try to hit a play like that, when it doesn’t work it can be frustrating,” McCarthy said. “We had some deception in our game plan and we frankly have it in every week. Thought we called more of them obviously today. Those are plays you try to set up.”

There was a final trick in the plan when the Cowboys intentionally took a safety so they could have a free kick with a 14-point deficit late in the fourth quarter. Chris Jones' popped up punt was perfect, but Justin March and Joe Thomas whiffed on chances to catch the high bounce, and the Eagles ended up with the ball.

Through three full games without Prescott and what was the NFL's No. 1 offense at the time, the Cowboys have one touchdown — in garbage time of a 38-10 loss to Arizona two weeks ago.

Dallas actually got the running game going, which is why the 9-7 halftime lead lasted until late in the third quarter. Elliott and Pollard combined for 103 yards on 26 carries, but Elliott still doesn't have a 100-yard game on his own. The two-time rushing champion has never gone more than two games into a season without a 100-yard day.

“I thought the run-blocking unit worked very well tonight and particularly when you’re running the ball and they know you’re running it and the productivity that we were able to have was definitely a step in the right direction,” McCarthy said.

The Cowboys also fixed the biggest problem they've had all season: turnover margin. Rookie cornerback Trevon Diggs had two interceptions — the first Dallas player with more than one since Jeff Heath five years ago — and Dallas finished plus-2 after coming in with by far the NFL's worst margin.