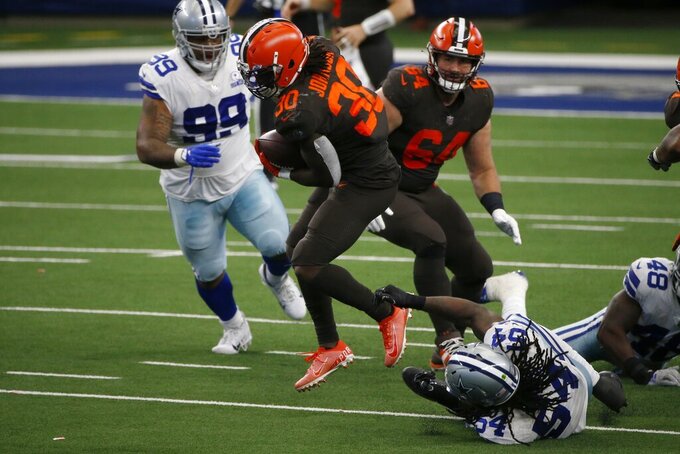 Cleveland Browns running back D'Ernest Johnson (30) attempts to break the grasp of Dallas Cowboys linebacker Jaylon Smith (54) after running the ball for a first down in the second half of an NFL football game in Arlington, Texas, Sunday, Oct. 4, 2020. The Cowboys' Antwaun Woods (99) and the Browns' JC Tretter (64) look on during the play. (AP Photo/Michael Ainsworth)

ARLINGTON, Texas (AP) — The Dallas Cowboys have never given up as many points and yards through four games than they have under first-year coach Mike McCarthy and the new defensive scheme that came with him.

Blown assignments, poor gap control and bad tackling have fueled those per-game averages of 37 points and 431 yards in a scheme more complicated than most of these players had under the previous coaching staff.

McCarthy doesn't think simplicity is the answer with the Cowboys (1-3) coming off a 49-38 loss to Cleveland and facing the winless New York Giants (0-4) on Sunday at home in a divisional matchup from the woeful NFC East.

“The worst thing we can do is narrow everything down and be a one-call defense,” McCarthy said. “I refuse to do that. That’s not the path. We have a defense that fits our players, and we have to make sure we are getting those guys in position.”

McCarthy won't call the Dallas scheme a 3-4, but it looks like one frequently after the Cowboys spent most of the past decade in a 4-3.

Defensive end DeMarcus Lawrence has experimented with standing at the line of scrimmage instead of getting in a three-point stance. Newcomer Everson Griffen said recently he was giving up on trying to get comfortable as a stand-up end.

Lawrence, who signed a $105 million, five-year contract before last season, has half a sack in the past 12 games going back to last year. Griffen's lone sack with the Cowboys came in Week 2 against Atlanta.

“If you think you are going to sit here and get a whole new coaching staff and, you know, win every game and shoot for the stars, you got a big surprise coming,” Lawrence said. “That was our surprise.”

Dallas is last in the NFL in turnover margin at minus-7. While the offense has lost turnovers on consecutive plays each of the past two games, the defense has just two takeaways all season. Only one team — Houston with zero — has fewer.

“That’s unacceptable,” McCarthy said. “It will not be the identity of this football team. It can’t be.”

Dak Prescott is the first NFL player with three straight games of at least 450 yards passing. He had a career high for the second straight week and his first 500-yard game with 502 yards against the Browns. But Prescott has contributed to his own huge numbers with early turnovers in three straight games that led to the Cowboys playing from behind.

Two-time rushing champion Ezekiel Elliott has been an afterthought two straight weeks in part because of the big deficits. Like Prescott, he contributed to getting behind against the Browns by losing a fumble right after a strip sack of his quarterback. Elliott has just 88 yards rushing the past two games combined.

CeeDee Lamb leads all NFL rookies with 21 catches, is second with 309 yards and tied for first two touchdowns after scoring the first two TDs of his career against the Browns.

Dallas gave up a franchise-record 307 yards rushing even though Cleveland lost lead back Nick Chubb to a knee injury in the first quarter. There were failures at all three levels of the defense, with an embarrassing day capped when Odell Beckham Jr. took a reverse 50 yards for a touchdown after the Cowboys had cut a 41-14 deficit to three late in the fourth quarter.

C Joe Looney didn't return after injuring his right knee on the first play of the game. CB Jourdan Lewis, who has been battling an ankle injury, limped off early as well.

17:28 — Total amount of time the Cowboys have led through four games. More than half of that was with a 14-13 lead over the LA Rams in the opener, a 20-17 loss. Dallas didn't lead at all during the game in its only win, 40-39 against Atlanta. The Cowboys kicked a field goal as time expired.

Even in arguably the NFL's worst division, it's hard to imagine the Cowboys going to the playoffs in McCarthy's Dallas debut without a win over the hapless Giants. Dallas will face former coach Jason Garrett, now the offensive coordinator in New York.

The best bet for Dallas' playoff future was sweeping this rare three-game homestand. Since Cleveland ruined that, visits from the Giants followed by Arizona on a Monday night loom large.