Cowboys' Witten: 'Talk to me in a month' about Elliott saga 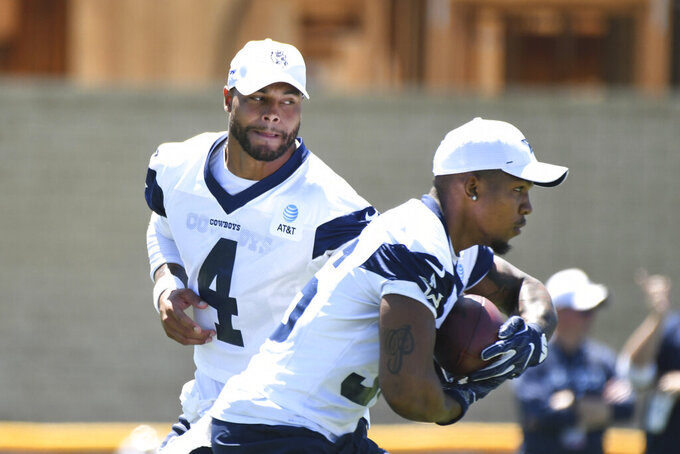 OXNARD, Calif. (AP) — Ezekiel Elliott's contract holdout doesn't faze the player who has been around Dallas Cowboys owner Jerry Jones longer than anyone else on the roster — even after taking a year off.

Jason Witten said "talk to me in a month" when the tight end was asked Saturday if Elliott's absence was casting a cloud over the high expectations for a franchise trying to get past the divisional round of the playoffs for the first time in nearly a quarter-century.

The 37-year-old Witten is back for a 16th season after the franchise leader in catches and yards receiving spent a year as a broadcaster.

Elliott wants a new contract despite having two years remaining on his existing deal. The two-time NFL rushing champion skipped reporting day and still wasn't around Saturday for the first practice.

"My experience has been those things, around here anyway, those things usually work out," Witten said. "Zeke loves playing. He's like a little kid the way he kind of approaches it and has fun. Talk to me in a month I guess if that was an issue if he wasn't there."

Despite his year away, Witten is sliding right back into a leadership role as he prepares to set the franchise record for seasons. While he understands his secondary role to the young trio of Elliott, quarterback Dak Prescott and receiver Amari Cooper, Witten's words still resonate.

"And Mr. Jones spoke to the team," Witten said. "He talked about taking advantage of opportunities and controlling things that you can control. I think for all players you have to be able to focus on what's happening right in front of you and know those things are going on."

Fourth-year back Darius Jackson is running with the first team with Elliott out. Jackson was a sixth-round pick the year the Cowboys drafted Elliott fourth overall in 2016.

Jackson is the only running back on the roster with NFL experience. He had six carries for 16 yards in a meaningless regular-season finale last season when the Cowboys had already wrapped up the NFC East title and Elliott didn't play.

The Cowboys have two rookies in the backfield and are particularly high on fourth-round pick Tony Pollard out of Memphis. Mike Weber Jr. was taken in the seventh round out of Ohio State, Elliott's alma mater.

Jackson said he and his teammates support Elliott's bid for more money. Elliott is due to make $3.9 million this season and $9.1 million in the fifth year, which was a team option because he was a first-round pick.

"Everyone knows the business side of things are a little messy and you never know how it might turn out," Jackson said. "We're just focused on what we've got to do out here and that's his business."

Coach Jason Garrett said Elliott's absence didn't change his message in his first speech to the team after physicals and conditioning tests Friday.

"We just talked to our team as if it were Day 1 and we shared with them what our expectations are," Garrett said. "Everyone is focused on what they need to do to be the best, as a player, coach or staff member. That's really what we try to emphasize."

Running backs coach Gary Brown said he hadn't talked to his star pupil since arriving in California, and that his conversations with Elliott never involve contracts anyway.

"I'm sure he's handling what he needs to handle as far as the football side goes," Brown said. "I'm sure he has his iPads and playbooks. I'm sure he's doing that. But as far as I'm going, I'm just worried about the guys here."

Defensive end DeMarcus Lawrence and his representatives spent the offseason negotiating with the Cowboys before agreeing on a $105 million, five-year deal with $65 million guaranteed.

Before agreeing to the highest per-season average in franchise history ($21 million), Lawrence held off on shoulder surgery. Maintaining that leverage is likely to keep him off the practice field most of training camp. But he wasn't interested in saying whether he had any advice for Elliott.

"I've got some advice for you," said Lawrence, who is on the physically unable to perform list. "Let Zeke handle his business and don't ask me about another man's business."

Witten believes that business will be handled.