Cowboys' Wright gets TD on blocked punt week after flub 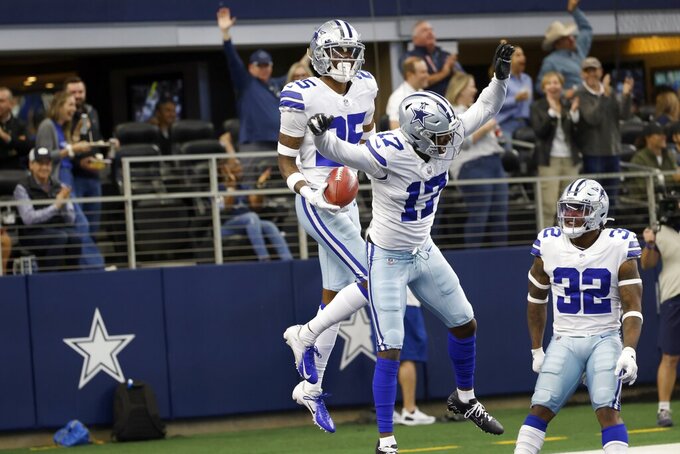 Dallas Cowboys cornerback Nahshon Wright (25), wide receiver Malik Turner (17) and running back Corey Clement (32) celebrate after Wright recovered a blocked punt in the end zone for at touchdown in the first half of an NFL football game against the Atlanta Falcons in Arlington, Texas, Sunday, Nov. 14, 2021. (AP Photo/Ron Jenkins)

ARLINGTON, Texas (AP) — This touch after a blocked punt was a touchdown for Dallas Cowboys rookie Nahshon Wright, and another special teams blunder for the Atlanta Falcons.

A week after touching a blocked punt that actually took the ball away from the Cowboys, Wright dived on one in the end zone just before halftime Sunday in their 43-3 victory over the Atlanta Falcons.

“I just jumped on it. ... I made sure I got it in,” said Wright, who was encouraged after meetings during the week with special teams coach John Fassel and learning from what happened a week earlier.

“Just making sure I know exactly what I need to do. Coach Bones, he encouraged me to continue to make plays, so that way, something like this today, I’m not afraid to go and try to make a play,” Wright said. “It was great to be out there and make that play.”

The first blocked punt for a touchdown by the Cowboys since 2015 came after diving 6-foot-3 defensive end Dorance Amstrong reached out with one arm to swat Dustin Colquitt’s kick. That sent the ball back toward the end zone, where several Dallas players had a chance at it before Wright secured it.

“That was my first one ever. I was pretty excited,” Armstrong said of the block.

Atlanta was punting on fourth-and-18 from its 17, a series that began with Matt Ryan's fumble after getting sacked by Micah Parsons, though offensive tackle Kaleb McGary recovered the ball.

The Cowboys manhandled Atlanta the way Denver did to Dallas a week ago in a 30-16 victory — when the Broncos led 30-0 in the fourth quarter.

After the Dallas defense had a three-and-out to start the second half against Denver, when it was 16-0, Malik Turner blocked a punt. Wright touched after the ball had crossed the original line of scrimmage and the Broncos recovered at their 19, 12 yards short of what they needed for a first down. But by rule Denver kept the ball and drove for another field goal.

Wright's recovery against Atlanta in the final minute of the first half, followed by a 2-point conversion after the Falcons had too many players on the field for the extra-point kick, put Dallas up 36-3.

“Like we say, stay in the moment,” fellow defensive back Jourdan Lewis said of Wright. “He made the play. Wasn’t worried about last week, he was worried about making the play.”

When the Falcons played in Dallas early last season, they had a 20-point lead in the first quarter and still led by 15 midway through the fourth quarter before their special teams mishap was decisive.

Dallas was still trailing when it lined up for an onside kick in the final two minutes. Three Atlanta players surrounded the trickling kick, but waited back even though they could have jumped on it at any time. Just as it got to the 10 yards needed for the Cowboys to recover, cornerback C.J. Goodwin pounced and beat the Falcons to the ball.

Six plays after Greg Zuerlein's slow-rolling onside kick, he made a 46-yard field goal as time expired for a 40-39 Cowboys victory in Week 2.

That was part of an 0-5 start that led to Atlanta firing coach Dan Quinn, now on the other side as Cowboys defensive coordinator.

“I think this meant more for him being him for the Cowboys, than it meant him trying to get some type of agenda against Atlanta,” Parsons said. “He just wants to see us come out here and play up to the standard. ... I’m pretty sure I saw a big smile on his face.”