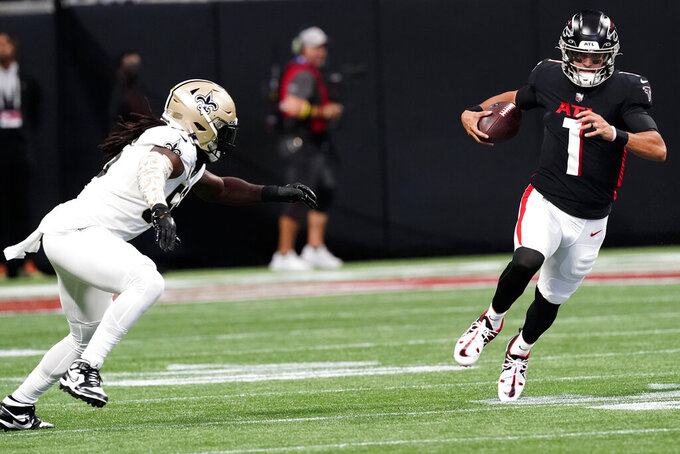 Atlanta Falcons quarterback Marcus Mariota (1) runs out of the pocket against the New Orleans Saints during the first half of an NFL football game, Sunday, Sept. 11, 2022, in Atlanta. (AP Photo/John Bazemore)

ATLANTA (AP) — A crucial red-zone fumble by Marcus Mariota spoiled his debut as Atlanta's starter on Sunday and set up another blown big lead for the Falcons.

The loss provided a painful reminder of Atlanta's past as it tries to launch a new era with Mariota at quarterback.

The Falcons led 23-10 when Mariota lost a fumble at the Saints 5 in the third quarter.

Even though New Orleans failed to immediately capitalize on the turnover, it was a missed opportunity for Atlanta to put the game away in Mariota's first start. The Falcons were outscored 17-3 from there and lost their season opener 27-26 on Sunday.

Mariota, who was acquired after the Falcons traded 14-year starter Matt Ryan to Indianapolis, bemoaned the mistake.

“We had multiple opportunities to put the game away,” Mariota said. “We allowed them as an offense to stick around. That’s something we have to get back and look at and correct.”

“Honestly I just lost track of where I was,” Mariota said. "I thought I needed a few more for a first down, so I put my head down not realizing I already had it. Looking back at that situation, I wish I had just gone down and protected the ball and given us a chance to score points."

Mariota had another crucial miscue late in the game with the Falcons leading 26-24. He fumbled the snap on a third-and-1 play from the Saints 42. He recovered but couldn't pick up the first down.

Falcons coach Arthur Smith drained the clock on fourth-and-1 before choosing to punt. The Saints took possession with 48 seconds remaining and no timeouts and drove 46 yards in five plays before Will Lutz kicked the go-ahead 51-yard field goal.

“Sure, there was a part of me that wanted to go for it,” Smith said. “My thought was at the time let the clock bleed down, let’s pin them down. They had no timeouts. ... Again if you had to do it over again, knowing the end result, sure a different call.”

Mariota said the fumbled snap was “100 percent on me.”

“We had a great look for the play we had called and I tried to cheat it and get back a little quicker so I would have an opportunity to read it a little bit better,” Mariota said.

In trying to “cheat” on the play, Mariota pulled back before taking the clean snap.

Mariota completed 20 of 33 passes for 215 yards with no touchdowns and no interceptions. He showed his dual-threat ability by running for 72 yards, including a 2-yard scoring run.

Still, the blown lead was a bitter start for a Falcons team still haunted by its inability to hold a 28-3 lead against New England in the Super Bowl following the 2016 season. The Patriots rallied to win 34-28.

The Falcons lost despite rushing for 201 yards, including a career-high 120 by Cordarrelle Patterson.

“Guys up front did an unbelievable job all game of controlling the line of scrimmage,” Mariota said.

“When it comes down to it in this league if you’re not scoring points in the red zone you’re leaving the door open,” Mariota said. “Credit to the Saints. They found ways at the end to make plays to win the game.”