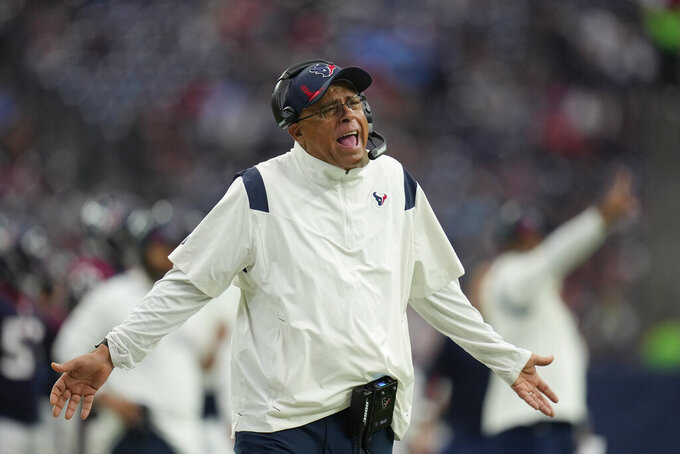 Houston Texans head coach David Culley questions a call during the first half of an NFL football game against the Tennessee Titans, Sunday, Jan. 9, 2022, in Houston. (AP Photo/Eric Christian Smith)

HOUSTON (AP) — Houston Texans coach David Culley remains confident that he’ll return for a second season despite speculation that he could be fired after his team finished the season 4-13 on Sunday after losing to the Tennessee Titans.

“As of right now, I feel like I will be coaching this team next year,” he said after the 28-25 defeat.

Culley was hired last January to replace Bill O’Brien, spending 43 years as a college and NFL assistant. He took over a team that went 4-12 last season with Deshaun Watson at quarterback.

Watson requested a trade around the time Culley was hired, which was before 22 women filed lawsuits alleging sexual harassment or assault. Watson sat all season and precipitated a rebuild in Houston that left Culley at the helm of one of the NFL’s worst teams.

Most of Culley's postgame news conference Sunday was dedicated to questions about his job security, and he didn’t waver each time he answered.

“I haven’t had any questions or doubts at all about what’s getting ready to happen,” he said. “I’m looking forward to being the head coach of this football team next year. Haven’t thought about it one minute.”

Players expressed a desire to have the 66-year-old coach back next season.

“He did a great job all season,” quarterback Davis Mills said. “Obviously, he was a great leader for the team. In the game of football, ultimately it comes down to wins and losses, but he had full faith in the team and really led us well all season. I loved him as a coach, and I hope he’s back."

Culley knows there’s plenty of work to be done if he gets a second year when it comes to leading the Texans back into contention.

“We needed to win some more ball games,” he said. “I thought like there were some ball games that we had that we could have won that we didn’t win. Basically, I’m just looking forward to this offseason and moving forward.”

Houston beat the Jaguars in the season opener before losing eight consecutive games after QB Tyrod Taylor was injured and Mills, a rookie from Stanford, struggled to adjust to the NFL.

But the Texans played better late in the season, with two of their four wins coming in the last month of the season, highlighted by a 41-29 victory over a Los Angeles Chargers team still in playoff contention.

Mills played much better in the last few games of the season after Taylor was benched and he returned to the starting role, He had trouble with turnovers in his first few starts but limited those mistakes in his last five starts when he had nine TD passes with just two interceptions.

Mills threw for 301 yards and tied a season high with three touchdowns Sunday to give him 2,604 yards passing this season to move past David Carr (2,592) for most yards passing by a rookie in franchise history.

The door is open for Mills to keep the job next season as the Texans are looking to finally trade Watson this offseason.

“I hope I’ve proved enough to get that opportunity for next year,” said Mills, the 67th overall pick in the draft.

While it's unclear whether the team believes Mills showed enough to lead the offense in the future or if they’ll look to upgrade the position in free agency or the draft, Culley was complimentary of him.

“I feel good about him," Culley said of Mills' touchdown passes of 28, 7 and 26 yards in the second half to make it close. “I got questioned going into halftime whether I was going to make a change. No, not going to make a change. He is our quarterback ... the way our offense played in the second half with him directing it just goes to show that he’s good enough to do what we need to get done here to win football games.”