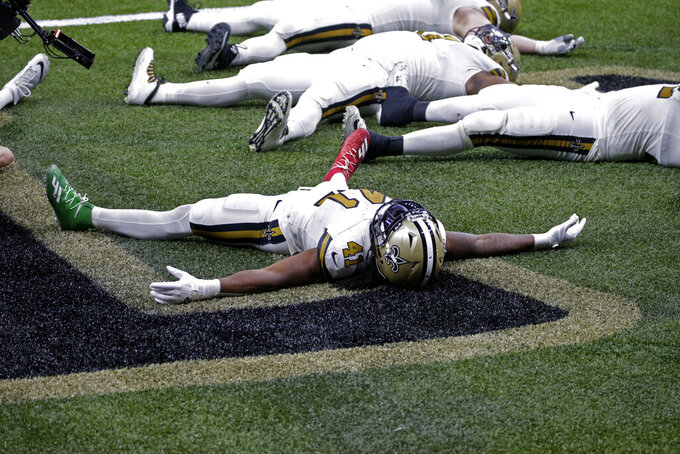 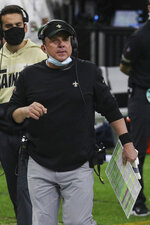 What was Sean Payton thinking?

What was Jon Gruden thinking?

In an eventful Week 16 that culminated with a first-round draft pick going from maskless to jobless and the New England Patriots getting swept for the first time in 20 years, two of the NFL’s most seasoned coaches made decisions that had football fans scratching their heads.

On Christmas night, Saints running back Alvin Kamara tied a 91-year-old NFL record by rushing for six touchdowns in a 52-33 wipeout of the Minnesota Vikings.

He was denied a shot at a seventh score not by Minnesota’s matador defense but by Payton, who sent in backup QB Taysom Hill on third-and-goal from the 1 with 4 minutes left after Kamara had already scored five TDs.

Given another chance after the 2-minute warning, Payton called Kamara’s number on first-and-goal from the 3 and Kamara scored his sixth touchdown, equaling Hall of Fame fullback Ernie Nevers’ mark set on Thanksgiving Day in 1929.

A fullback for the Chicago Cardinals, Nevers ran for six TDs against the Chicago Bears on Nov. 28, 1929. He added four extra points to account for all of the Cardinals’ scoring in their 40-6 victory.

Kamara might have beaten Nevers’ 40-point NFL record for most points scored in a game by one player, too, had Payton not summoned him to the sideline with 4:03 remaining and the Saints on the Vikings’ doorstep with a 38-27 lead.

“I was thinking about our best play there,” Payton explained afterward. “It was fourth down (actually third) and we felt that was a play that would be tough for them because, obviously, it’s a quarterback design run with an extra guy” blocking.

“But late in the game, I was mindful of it,” Payton said of the half-dozen TD mark.

Kamara said he was satisfied with six scores and tying the NFL mark, and would have been OK with five TDs, too.

“Sean gave Taysom the one touchdown when I had five. I wasn’t really worried about it. I was just like, ‘Shoot, it’s all good, whatever, we’re right there. I’m second at least,’” Kamara said.

But when Drew Brees hit Adam Trautman for a 41-yard catch to the Vikings 3 at the 2-minute warning, Kamara suddenly had a chance to tie Nevers and Sayers.

“And we were able to get it. We had the celebration planned out, man,” Kamara said of pretending to make snow angels. “It was a great moment.”

“Sean kind of mentioned to me, he said, ‘Hey, if Alvin gets one more touchdown, he ties this record with Gale Sayers.’ Obviously, you’re looking at the scoreboard, we’re up three possessions, let’s see how close it is,” Brees recounted. “So, they go down and score, we get the ball back, at that point it’s: get a first down and we’re on a knee.

"Well, we had the opportunity, we felt like, ‘Hey, let’s throw it before the 2-minute warning.’ And we get the big play to Trautman that gets us down in scoring range. So, man, some things had to happen there in order to have the opportunity. But then at that point, it’s like, ‘Man, we’re getting this record.‘”

Or tying it, at least.

Gruden’s peculiar plan cost the Las Vegas Raiders a shot at ending a four-year playoff drought when Miami made them pay for deliberately settling for a field goal.

With a defender grabbing his facemask and pulling him down, Ryan Fitzpatrick’s desperation heave to Mack Hollins set up Jason Sanders’ 44-yard field goal as the Dolphins drove the field in the final 19 seconds for an improbable 26-25 victory over the Raiders on Saturday night.

FitzMagic’s latest wizardry was made possible moments earlier when Gruden chose to run down the clock for a go-ahead field goal instead of trying for a touchdown.

Josh Jacobs went down on purpose at the 1-yard line after a 5-yard run and Derek Carr took a knee to set up Daniel Carlson’s 22-yard field goal with 19 seconds left that put the Raiders up 25-23.

The Dolphins didn't have to go the length of the field and they needed just one play to move from their 25 into field-goal range when Hollins was inexplicably left open for a 34-yard catch that Fitzpatrick threw while Arden Key dragged him down by the facemask.

Fitzpatrick didn’t even realize he’d completed the pass, saying, “My head was being ripped off.”

The 15-yard penalty that was tacked on moved the ball down to the Las Vegas 26, setting up Sanders’ winning kick that kept the Dolphins in the hunt for their first playoff berth since 2016 and eliminated the Raiders from playoff contention.

“I don’t regret it one bit,” Gruden said. “I just regret the results.”