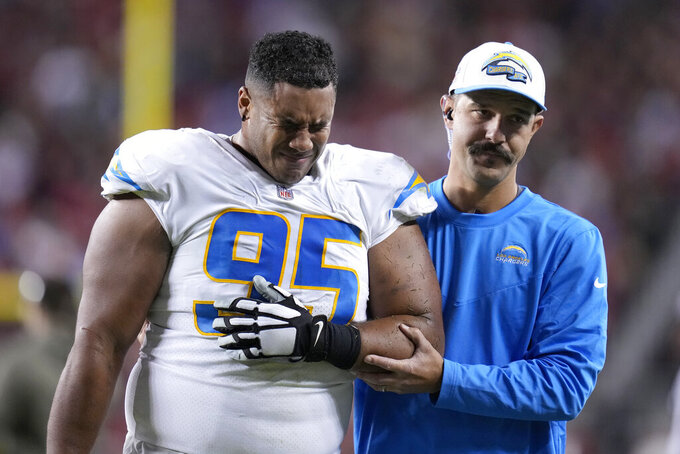 Los Angeles Chargers defensive tackle Christian Covington (95) is helped off the field during the second half of an NFL football game against the San Francisco 49ers in Santa Clara, Calif., Sunday, Nov. 13, 2022. (AP Photo/Godofredo A. Vásquez)

Just when Brandon Staley and the Los Angeles Chargers thought things couldn’t get worse with injuries, along came the loss to the San Francisco 49ers on Sunday night when the defensive line became the latest group to be decimated.

Staley said Monday that Otito Ogbonnia and Christian Covington suffered season-ending injuries during the 22-16 loss that dropped the Chargers to 5-4.

Ogbonnia, a fifth-round pick in last April's draft, ruptured the patellar tendon in his left knee during the first quarter. Covington tore a pectoral muscle during the fourth quarter.

After Ogbonnia and Covington's injuries, Los Angeles was down to only three defensive linemen as the Niners scored the go-ahead touchdown on Christian McCaffrey’s 2-yard run with 7:54 remaining in the game.

“We’ll have to work through some things in the next 36 hours. and probably make some acquisitions,” Staley said. “I think we’re trying to mine the entire NFL to find the best fits. Maybe we’ve got relationships in certain places, or maybe they play in certain styles that are similar to ours.”

Staley did add that Joe Gaziano is expected to be called up from the practice squad to fill one of the open spots.

Los Angeles has had difficulty stopping the run this season, even at close to full strength. With top run-stopper Austin Johnson lost for the year with a knee injury last week and the release of 2019 first-round pick Jerry Tillery, the Chargers went into the game already thin on the defensive line.

Add in the two injuries that happened during the game, and San Francisco was able to dominate the line of scrimmage.

Two of the three Niners’ scoring drives in the second half were at least 12 plays and they had the ball for 21:38. San Francisco had 106 of its 157 rushing yards after halftime.

The Chargers’ offense — down their top two receivers and a right tackle — didn’t help with only three first downs and 62 yards on five second-half drives.

Justin Herbert passed for 196 yards, the fourth-lowest total of his three-year career.

“In the second half, we had to play a lot of plays," Staley said. "There were a couple of third downs in there that were tough, that we missed a tackle, were tight in coverage, and they made a couple of good throws and catches.”

Los Angeles enters Sunday’s game against Kansas City allowing 5.39 yards per carry, one of the highest in the league.

With Staley and general manager Tom Telesco likely to make moves to shore up the defensive line, the rest of the locker room and coaches will not use injuries as an excuse. They nearly bristle at being asked if coming close on the road should count as a moral victory.

“If you’re on the field, you’re getting paid to play. You have to step up and make your plays,” running back Austin Ekeler said. “We got some of our guys that are down, but that doesn’t matter. The opponent doesn’t care. We have to play hard, but we also have to make plays. We can’t just do the minimum.”

The kicking game. Cameron Dicker — the team’s third kicker this season after injuries to Dustin Hopkins and Taylor Bertolet — was 3 for 3 on field goals and has made all five the past two games. The Chargers have made 16 straight field goals and 17 of 18 on the season.

Getting off the field on third down. The Chargers were the worst in the league when stopping teams on third down last season. After doing a solid job the first six games, opponents are 19 of 37 on third down the past three games, which is the fifth-highest conversion rate. San Francisco was 9 of 17, including 3 of 4 on third downs of 7 yards or more.

DeAndre Carter has nine receptions for 117 yards in the past two games. Carter beat 49ers safety Talanoa Hufanga on a corner route for a 32-yard touchdown during Sunday’s opening drive.

The right side of the offensive line. Right guard Zion Johnson and right tackle Foster Sarell allowed a combined two sacks, two quarterback hits, and eight QB pressures. Sarell got the start in place of the injured Trey Pipkins.

TE Gerald Everett (groin) is day to day after being injured in the first half. ... WR Keenan Allen (hamstring) and WR Mike Williams (ankle) will practice Wednesday. Allen has missed seven games, while Williams has been out the past two weeks. ... OT Trey Pipkins (knee) remains day to day.

24 — Dropped passes by Chargers receivers, according to Sportradar, which is among the league leaders. They had three against San Francisco, including one by tight end Tre McKitty during the second quarter that might have gone for a 35-yard touchdown and extended the Bolts’ lead to 17-3.

If the Chargers have any hopes of getting back into the AFC West division race, they need to defeat Kansas City this week. The Chargers have not won at home against the Chiefs since 2013 and have dropped the past two in overtime.