Daboll's success with Bills puts him on head coaching radar 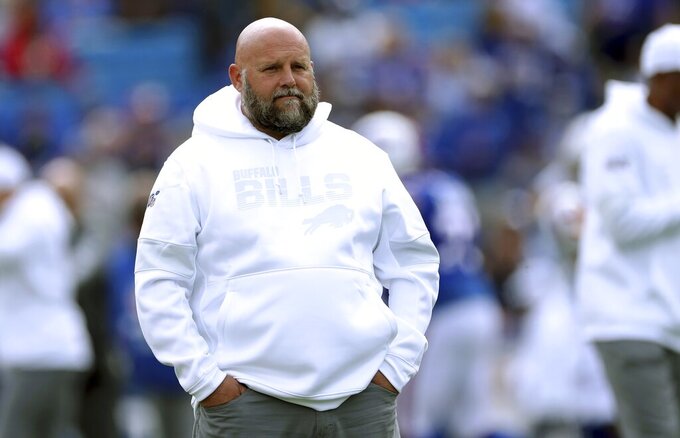 FILE - In this Sept. 29, 2019, file photo, Buffalo Bills offensive coordinator Brian Daboll watches the team warm up for an NFL football game against the New England Patriots in Orchard Park, N.Y. In his 20th NFL season and third in Buffalo, Daboll has transformed a once plodding, run-oriented attack into one of the league’s top passing units. (AP Photo/Ron Schwane, File)

For entirely selfish reasons, Beasley and Diggs weren’t prepared this week to provide Daboll glowing recommendations if it meant his no longer being with Buffalo.

Beasley’s response was even more emphatic.

“He’s not going anywhere. He’s staying on the team. I told him he can’t leave until I’m done,” said Beasley. “I’m not joking at all one bit. ... I don’t even want to talk about it.”

The two can ignore the chatter all they want as the Bills (11-3) prepare to travel to New England (6-8) on Monday night. But the prospect of Daboll attracting outside interest in the new year looms greater because of the job he’s done overseeing a Josh Allen-led offense that’s played a key role in Buffalo clinching its first AFC East title in 25 years.

In his 20th NFL season and third in Buffalo, Daboll has transformed a once-plodding, run-oriented attack into one of the league’s top passing units.

Diggs and Beasley are enjoying career-best seasons in catches and yards. Diggs has already set the single-season team record with 111 catches and his 1,314 yards receiving are 54 shy of Eric Moulds’ mark set in 1998.

Allen, meantime, has 30 touchdown passes, three short of the team’s single-season record set by Pro Football Hall of Famer Jim Kelly in 1991. Allen’s 4,000 yards passing rank second in team history, and 359 short of the record set by Drew Bledsoe in 2002.

Daboll, of course, won’t hear of any mention about the future beyond the next game. Having spent 11 seasons over two stints as an assistant in New England, he’s adopted the week-at-a-time approach perfected by Patriots coach Bill Belichick.

“You’re a creature of habit. You come in, you go to work,” Daboll said, when asked about his name being mentioned. “The day after the game, you move on to the next week. I was watching New England here for the last few hours.”

As for whether he hears about the speculation from his family, Daboll said: “Most of my family’s sleeping when I get home. Sleeping when I leave, too.”

Though privately known for his outgoing nature, Daboll maintains a buttoned-up public persona. He deflects questions on what the team’s success means to him despite being someone who grew up in the Buffalo suburbs rooting for the Bills. And he defers praise by crediting his players.

Yet, Daboll’s creative hand is apparent in almost every aspect of an innovative and aggressive offensive attack.

For a team that’s not finished a season ranked higher than 15th in yards passing since 2003, Buffalo currently sits second. With 407 points scored, Buffalo is 51 away from matching the single-season team record set in 1991. And the Bills have had 13 players, including Allen, score a TD receiving to match an NFL single-season record.

Daboll has benefitted from being able to build Buffalo’s offense from the ground up, his hiring coinciding with the Bills trading up five spots to select Allen with the No. 7 pick in the 2018 draft.

That’s different from his three previous coordinator stops in Cleveland (2009-10), Miami (2011) and Kansas City (2012). Over those four seasons, he coached a ragtag collection of journeymen quarterbacks including Brady Quinn (in Cleveland and Kansas City), Matt Moore and Chad Henne (Miami) and Matt Cassel (Kansas City).

Bill Belichick first hired Daboll to serve as a defensive assistant in 2000 on the recommendation of Nick Saban, who was coaching Michigan State. Daboll was on Saban’s staff, and the two were later reunited in Alabama in 2017, when Daboll served as the offensive coordinator for the college football champions.

“Nick recommended him very highly, which carries a lot of weight in my book,” Belichick said. “He’s done a good job all the way through. This has been pretty consistent with him. He’s a smart coach.”

In Buffalo, Daboll has formed a tight bond with Allen based on mutual trust and respect. Their relationship has grown to the point where Daboll consults Allen on which plays he likes and doesn’t, and Allen's ability to call his own plays.

That was the case in a 48-19 win at Denver on Saturday, when on the quarterback’s advice, Allen completed a 55-yard pass to Diggs in the third quarter.

“I love him, not just as a coach but as a person. He’s an awesome dude,” Allen said, noting it’s not unusual to get a call from Daboll at odd hours of the evening to discuss plays. “I’m glad I’ve been able to have him for the last three years and see our relationship grow.”

How long it lasts remains to be seen.

“These opportunities don’t come along every year, and certainly happy for both those men, Leslie and Brian. And I think they’re both well-deserved,” McDermott said. “That’s what comes with success.”