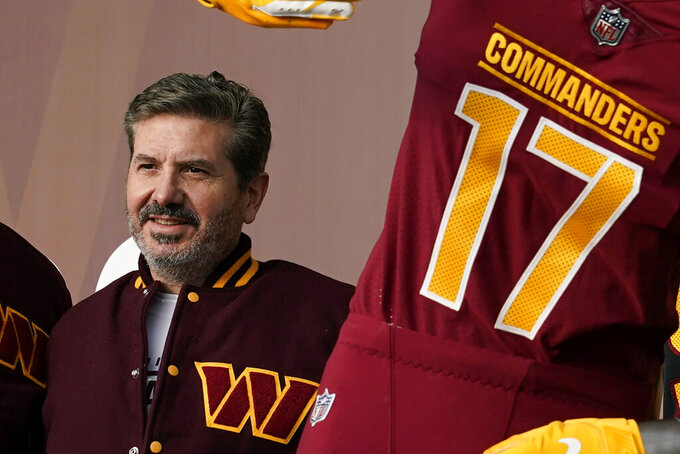 FILE - Washington Commanders' Dan Snyder poses for photos during an event to unveil the NFL football team's new identity, Wednesday, Feb. 2, 2022, in Landover, Md. The Washington Commanders are denying the contents of a report by ESPN detailing Dan Snyder's efforts to influence other NFL owners and the league office to keep control of the team. In a statement sent to The Associated Press on Thursday, Oct. 13, a Commanders spokesperson called it “categorically untrue” and “clearly part of a well-funded, two-year campaign to coerce the sale of the team, which will continue to be unsuccessful.” (AP Photo/Patrick Semansky, File)

Dan Snyder largely kept a low profile for several months, skipping Washington’s annual welcome home luncheon and allowing wife Tanya to be the face of the ownership for the Commanders.

Then came his team’s visit to Dallas. Snyder was front and center on the star at the 50-yard line meeting and talking with Cowboys owner Jerry Jones. Amid ongoing investigations by Congress and the NFL, Snyder looked most comfortable surrounded by Jones, Tanya and Commanders president Jason Wright.

They posed for a photo on the field and Washington’s Twitter account posted it with the message, “Friends and rivals for 24 years.”

That remains the case. Though this week's ESPN story signaled a rift between the longtime confidants, their unique friendship has stood the test of time and Jones’ support remains one of the biggest reasons Snyder maintains control in Washington while his organization is engulfed in off-field scandals.

On his weekly Dallas radio appearance Friday, Jones said he has not heard of NFL owners wanting to oust Snyder. While pointing out “owners are not natural allies,” Jones made it clear he and Snyder are the exception to the rule.

“I’ve got a long relationship with Dan,” Jones said on 105.3 The Fan. “It’s certainly a competitive one on the field and one that is a part of the NFL.”

Snyder’s status is not on the agenda to be voted on at the next owners meeting Tuesday in New York, and there’s no reason to believe — as of yet — that there are the 24 necessary votes in favor of removing him. Jones and his influence would explain that.

When Snyder bought the Washington team in 1999, Jones had owned the Cowboys for a decade. Familiar with the inner workings of the league, Jones took Snyder under his wing over the first few seasons.

They sat next to each other at NFL meetings, and their friendship grew from there. In boardrooms, at times it became Snyder and Jones against their NFC East rivals: John Mara of the New York Giants and Jeffrey Lurie of the Philadelphia Eagles.

That was certainly the case in 2012 when Washington and Dallas were each punished for salary cap circumvention and Mara said he “thought the penalties imposed were proper.” Told of those comments, Jones defended himself and Snyder by saying: “That’s John’s opinion. That’s not my opinion.”

Away from football, Snyder and Jones have taken vacations together with their wives and families. They even filmed a Papa John’s Pizza commercial together in 2010 at Cowboys Stadium, their natural banter a window into the Snyder-Jones dynamic that has been prevalent behind the scenes for quite some time.

Becoming friends in that kind of job is not normal, Jones acknowledged Friday.

“They just are not because of the competitive aspect and what it means to individual owners to compete and represent those various NFL teams,” he said. “It’s not a natural partnership at all. but that still doesn’t mean you don’t have a lot of respect for owners, and I do.”

Jones brushed off ESPN's reporting that said he told people he may not be able to protect Snyder anymore. Cowboys spokesman Jim Wilkinson declined comment to The Associated Press about the article.

“Anything in that was news to me,” Jones said. “I don’t have those kinds of problems.”