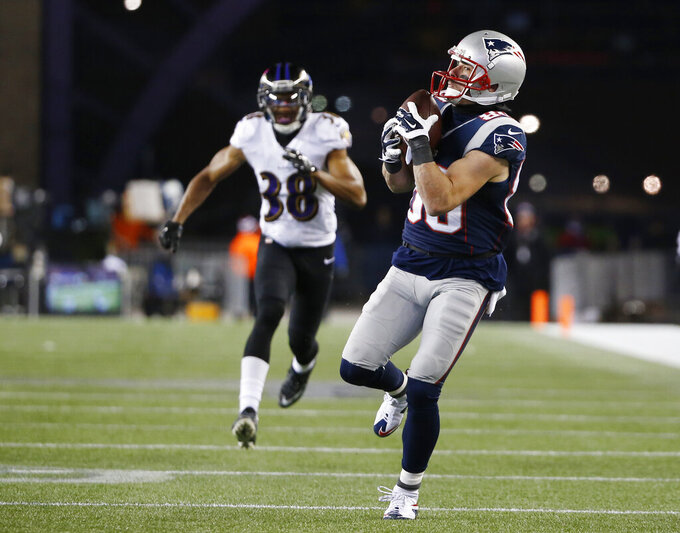 FILE - New England Patriots wide receiver Danny Amendola (80) catches a 51-yard touchdown pass from Julian Edelman, as he runs from Baltimore Ravens defensive back Rashaan Melvin (38) in the second half of an NFL divisional playoff football game on Jan. 10, 2015, in Foxborough, Mass. Amendola, who earned two Super Bowl rings with the Patriots and became one of Tom Brady’s favorite playmakers during his five seasons in New England, is retiring. (AP Photo/Elise Amendola, File)

FOXBOROUGH, Mass. (AP) — Danny Amendola, who earned two Super Bowl rings with the Patriots and became one of Tom Brady’s favorite playmakers during his five seasons in New England, is retiring.

The veteran 36-year-old receiver posted a video on social media that featured highlights of his 13 NFL seasons with only one line: “Wouldn’t have it any other way.”

The former Texas Tech standout made his NFL debut with the St. Louis Rams in 2009 as an undrafted free agent and spent his first four seasons there before being signed by the Patriots in 2013. He also had stops in Miami (2018), Detroit (2019, 2020) and Houston last season.

He ends his career with 617 career receptions for 6,212 yards receiving and 24 touchdowns.

Though undersized at 5-foot-11, he shined in New England’s system, scoring a touchdown in the Patriots’ Super Bowl win over Seattle to cap the 2014 season.

He earned a second championship with them in 2016 during a championship run that included a catch during the Patriots’ historic comeback win over Atlanta.

"He was a very good player for us,” Patriots coach Bill Belichick said. “Had a lot of skill, mostly played inside, but could play outside. Could return, very smart, tough, dependable, great hands and concentration. ... He was tough and he was a good football player.”

Injuries ultimately slowed down Amendola after he left New England. He totaled just five touchdowns over the past four seasons.