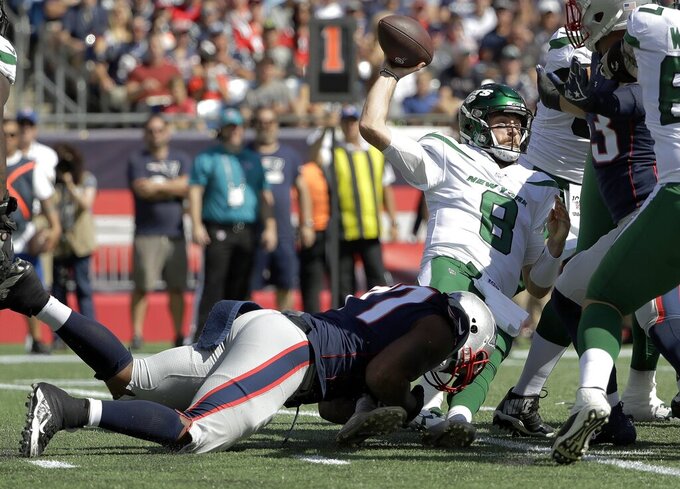 New York Jets quarterback Luke Falk (8) tries to pass while he is dragged down by New England Patriots defensive end Michael Bennett, left, in the first half of an NFL football game, Sunday, Sept. 22, 2019, in Foxborough, Mass. (AP Photo/Steven Senne)

NEW YORK (AP) — Sam Darnold is on the road to recovery — and he believes the Jets will soon be, too.

That might be tough to imagine at the moment, particularly with New York sitting at 0-3 and coming off an ugly loss in New England. But the second-year quarterback insists better days are ahead.

"We're going to go on a little run here," Darnold said Monday. "It's going to be fun, but it's going to take a lot of work."

Darnold simply wants to be able to take the field, something he hasn't done the last two games because he's recovering from a bout with mononucleosis. There remains hope he could return after the bye-week break and practice next week, and then play at Philadelphia on Oct. 6.

Coach Adam Gase said Darnold is feeling better, looking better and trending in the right direction, but added that he doesn't "want to jinx it."

Because, of course, it has been one of those seasons.

Darnold had tests Monday and the plan is to have him start cardio work later this week. He'll have additional medical tests next Monday, and those will give the quarterback and the Jets a good sense of what his immediate availability will be.

"My spleen right now isn't where it needs to be in terms of coming back full-go," he said. "It did go down a little bit and it did shrink a little bit, so I'll be able to do some light cardio and hopefully throughout this week, it gets a little bit lower."

That would be a big boost to an offense that has been lackluster through three games, scoring a total of 11 points during that span with Darnold, Trevor Siemian and then Luke Falk under center. Gase called the offense's performance in the Jets' 30-14 loss Sunday "atrocious," and he didn't change his tune 24 hours later.

Gase won't hold any on-field practices this week. He'll instead scout himself, his coaching staff and his players and try to make much-needed improvements.

Then, the Jets will come out of the break looking to rebound by putting the first three weeks far behind them. And with an eye on making a run for the playoffs — despite how dire things look.

"We've just got to stay confident, man, stick together," safety Jamal Adams said. "It doesn't matter what anybody says. ... It's definitely possible. It can definitely happen."

No, that's not a good sign. Particularly for the offense.

The offensive line is struggling mightily, despite having five veteran starters.

New York upgraded at key spots by adding former Pro Bowlers in center Ryan Kalil, who came out of retirement in early August, and left guard Kelechi Osemele. Still, they collectively have done little to create holes for the running game. Le'Veon Bell has been mostly bottled up through three games, averaging just 3.4 yards a carry — with many of the yards coming after contact.

The line has also failed to consistently protect the quarterback. New York has allowed 13 sacks, tied for third most in the league.

"Just some execution issues," left tackle Kelvin Beachum said, "and things we have to do to continue to jell together as an offensive line."

Linebacker Neville Hewitt. The fifth-year veteran has been a bright spot, filling in at inside linebacker because of injuries — first to Avery Williamson and then C.J. Mosley. Hewitt leads the Jets in tackles (21) and sacks (2).

There was some hope he'd be able to shine in Gregg Williams' defense, but so far that hasn't been the case. Leonard Williams has no sacks this season, and just two over his last 14 games.

"I think I've been OK," the defensive lineman said. "I definitely need to do more and be more of an impact and help the defense."

Darnold is the key, but Gase said Mosley (groin), rookie defensive lineman Quinnen Williams (ankle) and wide receiver Demaryius Thomas (knee/hamstring) could be back to play against the Eagles. Running back Trenton Cannon has a hamstring injury that could sideline him a few weeks.

0 for 12: the Jets on third down against the Patriots.

Gase joked he can't believe he's happy the team's break comes in Week 4, but the Jets need it.

The schedule continues to be tough — with games at Philadelphia (1-2), home vs. Dallas (3-0) and New England (3-0), and at Jacksonville (1-2) — but there's some optimism because of the players due to return. Other than Darnold, Mosley, Thomas and Quinnen Williams, New York will get tight end Chris Herndon and outside linebacker Brandon Copeland back after the Eagles game after serving four-game suspensions.

"We've just got to keep grinding on it," Gase said. "That's just how I've always been built. Things don't always happen right away. I know in this society, everybody wants everything to be perfect right away, but it doesn't always work out that way. We've got to get some continuity."