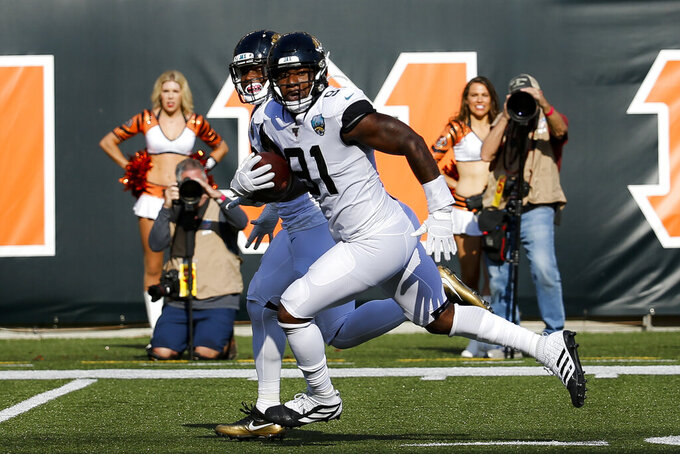 Jacksonville Jaguars defensive end Yannick Ngakoue (91) runs in an interception for a touchdown in the second half of an NFL football game against the Cincinnati Bengals, Sunday, Oct. 20, 2019, in Cincinnati. (AP Photo/Frank Victores)

JACKSONVILLE, Fla. (AP) — Sam Darnold might not get much of a reprieve against the Jacksonville Jaguars on Sunday.

Six days after his "seeing ghosts" sideline comment went viral, Darnold and the New York Jets (1-5) face a defense coming off one of its best games of the season.

Darnold will try to do better — and rebound from the worst performance of his two-year professional career . He completed 11 of 32 passes for 86 yards with four interceptions, lost a fumble and finished with a 3.6 QB rating against New England.

He looked especially confused against all-out blitzes, throwing several passes off his back foot and nowhere near receivers.

"If you were involved in that game on our side, it was embarrassing," Jets coach Adam Gase said. "You don't want to lose 33-0. You don't want that to happen. You don't want to get just smoked like that where everybody looks terrible. You put too much time and effort and all these hours up here. ...

"When you're on national television and that happens, it's for everybody to see and to go through, that is embarrassing."

Jacksonville played it coy this week, refusing to say how it would approach Darnold. But it would be stunning if the Jags didn't build their game plan around a variety of blitzes or at least blitzing looks.

"I really don't know what we're going to do yet," defensive coordinator Todd Wash said Thursday.

"Usually when a team gets blown out, they come with a lot more focus and locked in that next week," Campbell said. "I wish they could have won the game. I'd love to have them come here off a win or even a tough loss. But the way they're coming in, they're going to be locked in and focused."

Darnold has handled the fallout — internet memes and jokes could last for years — in stride.

"I'm not embarrassed by it," Darnold said Tuesday during his weekly radio spot on 98.7 ESPN New York's "The Michael Kay Show." ''It is what it is. Worse things have happened to me. But at the same time, yeah, it's just a bummer that it was live. It's a lot more common a phrase than it's being made out to be."

Darnold was mic'd up for ESPN's broadcast, and the Jets were angry that the network and NFL Films — which had a representative approve the clip for use — allowed it to be aired.

Darnold got plenty of support around the league, including from Jaguars quarterback Gardner Minshew.

"That's not cool," Minshew said. "You put trust in these guys putting microphones in your face for the game, so I feel for him there for sure. It was a tough night for him. ... You want to be able to come to the sideline and be confident and tell your coaches how you feel and have that open line of communication without getting everything and anything thrown up there on TV."

Here are some other things to know about the Jets and Jaguars, who are playing for the second straight season:

The Jaguars likely will be without three defensive starters against the Jets.

Defensive tackle Marcell Dareus had core muscle surgery Thursday in Philadelphia and will be sidelined at least a month, and linebackers Najee Goode (toe) and Leon Jacobs (hamstring) are unlikely to play.

Leaving Jacksonville even thinner on defense, backup linebacker Quincy Williams (hamstring) might not be available and another linebacker, D.J. Alexander (foot), was placed on injured reserve earlier this week.

One positive in the Jets' loss to the Patriots was running back Le'Veon Bell's season-high 70 yards on 15 carries — against what was the NFL's top-ranked defense at the time.

It was hardly an eye-popping total, but between the early shuffling of quarterbacks and constant personnel changes on the offensive line, it has been a tough go so for in Bell's first season with New York.

A week after getting middle linebacker C.J. Mosley back in action, the Jets might again have to deal with not having him running the defense.

Mosley injured his groin in the season opener, returned against New England but didn't have his usual burst. Gase said the team is taking a "deep dive" into trying to determine what is ailing Mosley, and it likely could land him back on the sideline.