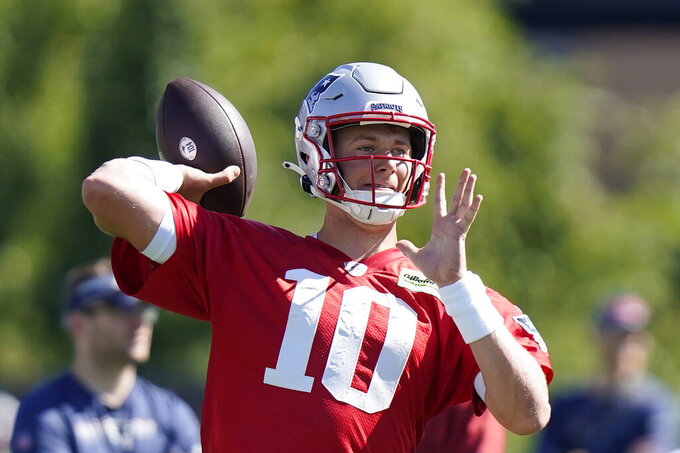 FOXBOROUGH, Mass. (AP) — For now, the title of offensive coordinator officially remains unfilled on the Patriots coaching staff, with Bill Belichick yet to make any definitive statement on who will be calling plays on that side of the ball this season.

Day 1 of training camp Wednesday did provide more clues, however, of how things may run in the regular season, with quarterback coach Joe Judge in charge of working with Mac Jones on technique, Matt Patricia holding the call sheet and relaying plays, and Belichick having a lot more input in the overall offensive scheme than he has in recent years.

It’s a continuation of the approach that was used during minicamp in the spring, another sign the multi-voice system will continue.

“You want to listen to all the good coaching that you can get from three coaches who’ve all been head coaches. They’ve seen a ton of football and that’s what I’m trying to take in,” Jones said. “What’s something that each one of them says in a meeting that I can take with me — whether that’s about life or football — and then apply it in game? They all bring a different perspective. But I feel like they’re all listening to the players.”

Though structurally it is a dynamic change from last season under former offensive coordinator Josh McDaniels, the early feedback from Jones and his teammates is that the adjustments made so far have streamlined things and will allow everyone to play freer.

“Definitely simplified,” offensive tackle Trent Brown said. “I feel like it’ll make it able for the playmakers to play faster. It’ll allow us up front to play faster as well.”

That was on display during the limited 11-on-11 work the offense did on Wednesday when Jones moved swiftly in and out of plays in the red zone, giving receivers such as DeVante Parker a small head start as the defense was still adjusting pre-snap.

The extra lead time enabled Parker to run clean routes and haul in a pair of TD catches.

“A lot of adjustments we’ve made to come off the ball faster,” receiver Kendrick Bourne said. “Just to get a head start off the ball is huge. It just feels faster. More speed. More urgency. ... It’s a better feeling keeping the defense on their toes, not allowing them to be ready.”

Jones said having those voices in his ear hasn’t complicated things for him. He appreciates the open dialogue that exists between everyone involved.

“Coach Belichick’s done a great job kind of explaining exactly what we want to do as an offense,” Jones said. “And Matty P’s seen so many different defenses along with Coach Belichick, so it’s like they combine their knowledge how to attack the defense. That’s something that’s really stood out to me. ... They all bring this different energy to the room when they’re presenting. They all are trying to get us to work together. The most important part is that we’re all on the same page, regardless of who’s talking, who’s making the decision on a play or whatnot.”

But there’s only so much about the nuances of the new offense the typically tight-lipped Patriots are going to reveal in the preseason.

“I guess you gotta watch and see,” Brown said.